What is the theoretical smallest size limit for a phased array antenna that can reach LEO?

Now that one provider is operating a phased array ground-to-satellite internet comm system, others will follow. A frequently asked question is "When can we use Starlink with a sat phone?". Does physics allow such a thing? I can believe the current dish can be shrunk, but what are the theoretical and practical limits?

The current Starlink constellation orbits at 540 to 590 km and Kuiper plans to use 590 to 630 km. However, Starlink proposed a later shell would orbit at 340 km, although idk if that is in their current planning. Nevertheless, 340 km could be used in your calculations of the ground antenna size limit.

It's all a matter of link budget.

Globalstar, for example, has satellites at 1400 kilometers, usable from a satellite phone with a low-gain omnidirectional antenna, as are Iridium's satellites at 780. Both provide narrowband to midband internet access. Inmarsat, Thuraya, and plenty of others have satellites in geostationary orbit at 35,786 kilometers that can provide narrowband-to-midband internet service to low-to-medium gain antennas (about 10 dBi, in the case of BGAN) by using large antennas on the satellite side. 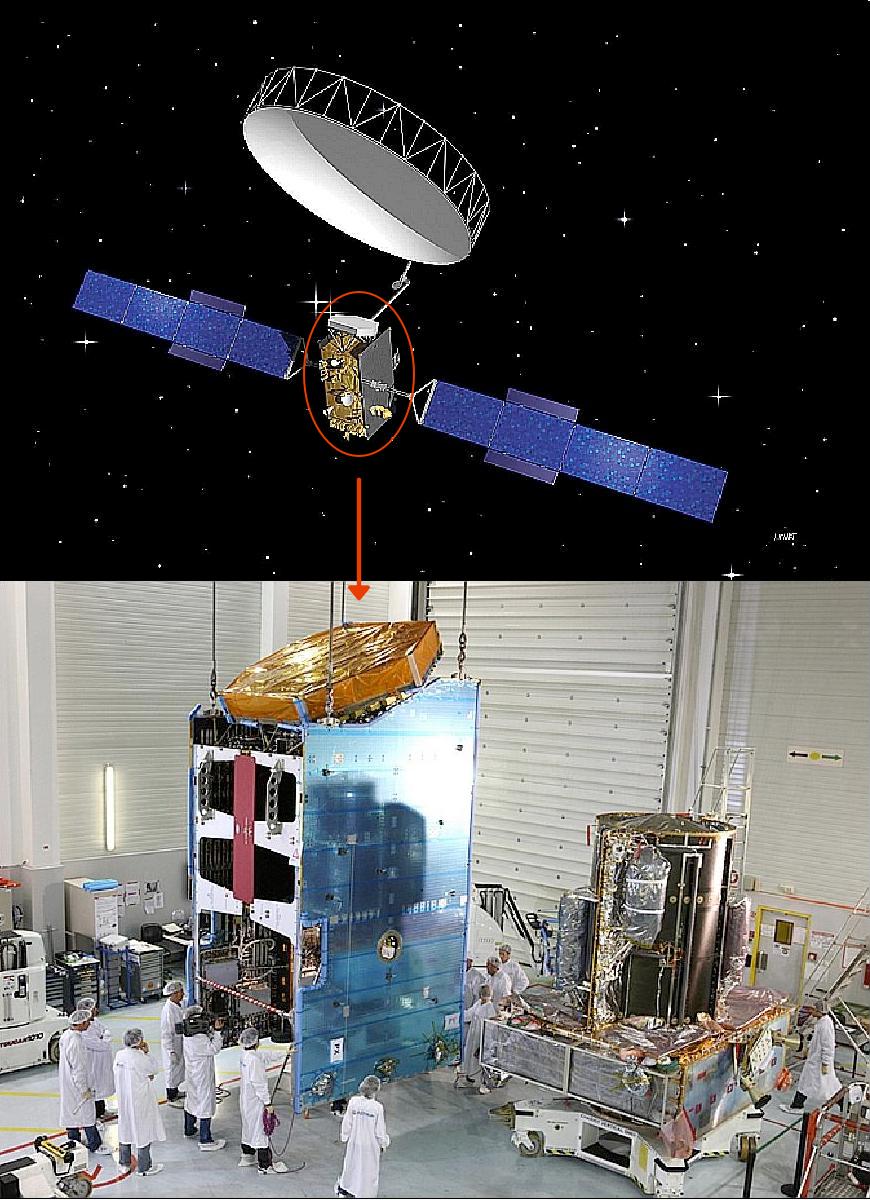 Pictured: An Inmarsat I-4, above as deployed in GEO, below during assembly (humans for scale!)

These are, of course, L- and S-band services, which if your question is about Starlink, their satellites do not support (and are not licensed to use), but if it's a question of technical feasibility, it's very possible - there are plenty of companies already doing it.

If your real question is "What are the theoretical limits in user terminal antenna gain for a low-earth-orbit constellation providing broadband internet access", well, that's harder to say without a lot of details of the proposed network. However, since you talk about Starlink, if you assume the link budget of Starlink, we can do some math. This article puts Starlink's user-terminal-side received power at about -48.23 dBm - this is, by small-antenna satellite phone standards, obviously a very strong signal, but that makes sense - they'll need it for the data rates they want.

However, working from this number we can come up with a basic link budget. The antenna reflector on the aforementioned Inmarsat I-4 has a diameter of 10 meters. For mobile-satellite service, you generally want the lowest frequency you can get away with in order to keep required user terminal gain low, but realistically, such a hypothetical "MSS Starlink" would not be able to get as much L-band spectrum as it would need - lot fewer total MHz to allocate out down there. However, we can work with it. At L-band (1.5 GHz), the gain of the giant I-4 like satellite-side antenna should be about 43 dBi. From the same calculator, at Ka-band, 20GHz (the lowest-frequency MSS-allocated spectrum I reckon they could actually use for this), it's 65 dBi.

The distance from the user to the satellite is very much up to the constellation design. A satellite that must serve users at its horizon needs to support users much further away than its orbital altitude. However, since this is a "what is theoretically possible" question we can assume a very large constellation, in which the distance to the user approaches orbital altitude. I'll say, as somewhat of a guess, that max distance to the user is 400 kilometers, for a very dense constellation at your 340km orbit.

Plugging all that into here, and assuming a user terminal antenna gain of 4 dBi (this is pretty typical for an unpointed mobile satellite service terminal antenna) and adjusting the transmitter power until we reach our link budget, we find that the satellite would need to put out around 150-200 watts. This is high, but not utterly inconceivable for satellite communications. If we instead assume 10 dBi on the user terminal (BGAN-like gain - would probably need a small, few-element phased array to get away with this for a non-GEO satellite, but could still be a small flat panel, maybe on the order of 10x10 cm with like, a 2x2 array or so) we can get the needed satellite-side TX power down to 50 watts, more reasonable.

At Ka-band, thanks to the higher gain of the large reflector on the satellites, the link budget actually works out relatively similar, though one thing that calculator won't account for unless you calculate separately and add it in is atmospheric losses which are larger at Ka-band than L-band. Note that on the satellite side, due to amplifier inefficiency, the effective power requirement to transmit at Ka-band is likely 2-3x what it would be to transmit at the same power output at L-band. Getting 200 watts for one transmit beam out of a satellite in the Ka-band would be rather challenging, I would think.

I would also like to note that simply taking a GEO satellite and putting it in LEO is going to require some design changes - among other things, GEO satellites are not typically designed to have their view of the sun eclipsed by earth every 100-ish minutes, and while they do have batteries for when the sun DOES go behind the earth for them, this is much more infrequent and not as meaningful to their power budget. Adapting a GEO satellite to LEO, you would probably need more solar panels and more, possibly more and better (higher cycle-life - you'll see a lot more cycles on them in LEO), batteries.

Finally, the user terminal having such greatly decreased gain is likely to require network changes to ensure two satellites, even far-apart ones, do not serve anything close to the same area. With a high-gain steerable user terminal you get some degree of choice in which satellite you "hear" - not so at 4 dBi. This is a significant, if not insurmountable, consideration.

TL;DR: With enough of a satellite, it is possible. However, you're talking about taking some of the largest, most specialized MSS satellites in GEO and launching thousands of them to reach a suitably dense LEO constellation. It would be an exceptionally expensive undertaking, even on the scale of the already-high costs of GEO satellites or LEO constellations. According to the best info on it I could find, Inmarsat's satellites cost between \$100M and \$400M each. Economies of scale of course apply when producing more of them, but I think at Starlink-like numbers this could very easily be a trillion dollar project (while I'm sure someone will be quick to raise dropping launch costs, I would like to point out that for such satellites, launch, even launch of such large satellites to such a distant orbit as GEO, accounts for only a relatively small fraction of the cost to build, launch, and operate). On a purely technical basis however, yes, it is possible.

EDIT: Also, as for shrinking the user terminal down this small on the current constellation, no chance. No amount of redesign work will get the aperture efficiency of an antenna above 100%. They could maybe make it a little better, or make the modulation a little more efficient, but they're not going to go this far just with improved user terminals. You can't beat the Shannon limit and you can't get aperture efficiency above 100%.

The trick in this question is the term "theoretical", which the OP left open for you to show the "limit" (if any).

Then you can try to increase the satellite antenna gain (in future Starlink generation(s)) to compensate for the loss of gain in the user terminal (as suggested in comments and one answer), to keep your link-budget closed, everything else being equal.

Practically, it means more (narrower) beams per satellite or more satellites. It could mean heavier satellites and hence more launches.

You compensate the antenna gain loss by reducing the rain margin, which is high at the frequencies used by Starlink for the service link (Ku-band).

Practically, and especially for tropical regions, you mainly aim at providing service when the sky is clear. The engineering data for this is given by this ITU recommendation. You assume that the users have no other alternative, that is you are "better than nothing".

You antenna gain loss is compensated by reducing the service bit rate, assuming that Starlink already operates close to the Shannon bound (the only theoretical limit I know of). Theoretically, if you reduce the peak bitrate by 10, you can recover 10dB in any loss of gain in your link-budget. Note that the previous "Big LEO" constellations offer bitrates in the order of 1/1000 of that of Starlink.

Practically, it means you are not selling the same type of service (i.e. Broadband Access), and hence your market size is smaller.

Theoretically, you can try to transmit as much as you need ("to reach LEO").

Practically, if you don't have exclusive rights to a portion of frequencies, there are rules by the ITU to protect other users of these frequencies, especially those who have priority over yourself. Note that Starlink operates in the frequency already used by GEO satellites (the "incumbents", who have priority). The only way to protect GEO is by using "directional separation". That is to ensure that terminals of Non-GEO constellations do not transmit excessively in the direction of the Equator (where the GEO satellites operate). These rules impose directional antennas, which in turn impose large areas/dimensions, whether they are array-based or reflector-based, or a hybrid of both. For interferences reason, Starlink antennas cannot "look" at a large portion of the sky above, unless all satellites it sees (the GEO, non-GEO-non-Starlink, and the Starlink themselves but not the best in-sight one) operate in different frequencies.

The bottom line: a link-budget exercise is not a "simple" balance sheet. It is the engineer's art of making the right assessments of practical limits.

Not the answer you're looking for? Browse other questions tagged spacex physics communication-satellite starlink or ask your own question.

12
What limits the number of times that a liquid fueled rocket can restart?
13
What are the physiological changes that would result from living in Mars gravity for years together?
6
Can someone explain to me what will cause Starman’s orbit to change to match the orbit that has been posted?
2
What is the lowest power signal that the DSN can detect?
8
What is the smallest body in which a sling shot maneuver can be performed?
6
What was the Crew Dragon reentry mass for the mission that landed August 2, 2020?