What is the range of frequencies of a deep space channel?

I've been trying to find the values of bandwidth of each Deep Space frequency channel: band S, X and Ka. In the official NASA's documents only appears the center frequency of each one, but it doesn't describe their range. Do you know if there is any page where I can find those values?

Even that is a gross oversimplification, because all of these bands are licensed for multiple uses. What the S band portion really looks like, at least in the U.S., is this: 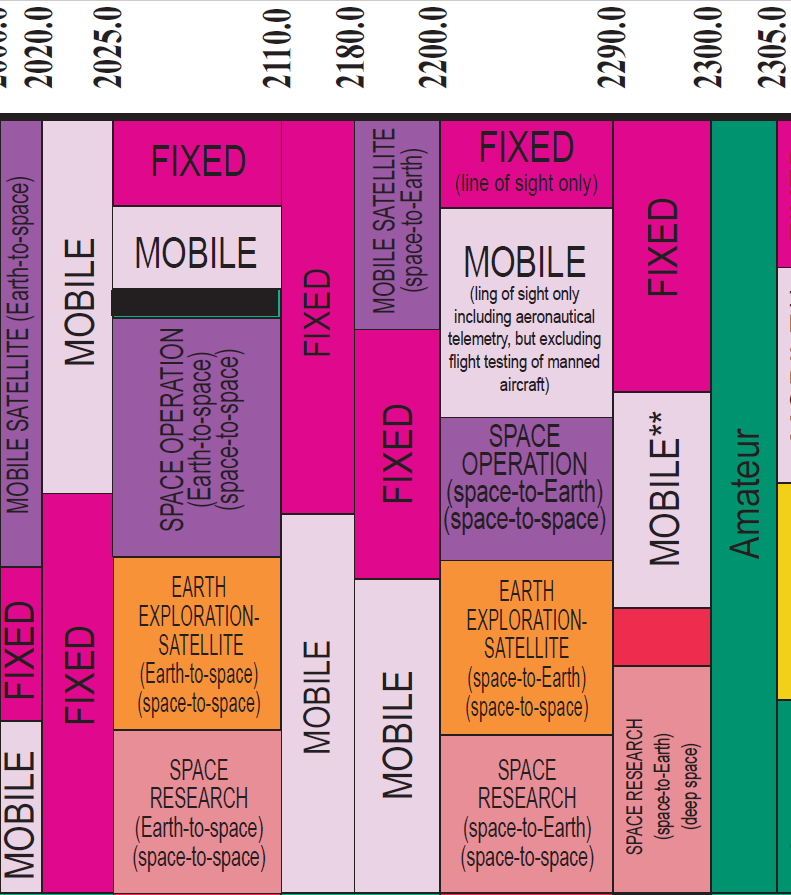 , taken from this chart.

The individual channels into which each DSN band is divided are expressed by a page of formulas which may be found in the same JPL document I linked above. It begins with:

10/27 MHz means each DSN channel is centered 370 kHz apart, but that still doesn't tell us how much of that width is actually occupied by the modulation in use. A different JPL document in the same series, 810-005 206, Rev. C, says that is user-selectable, using BPSK rates of 4 kbps to 256 kbps, and a wide variety of error correction encodings.

Thank you, all of you.

According to your valuable responses, I found the following bandwidths for each Deep Space allocated frequency channel:

0
What are the main sources of radio noise & interference limiting deep space data rates and availability?
2
Will there be "Near Space" Ka-band allocations for TESS?
6
Is NICER/SEXTANT the first civilian "spacecraft" to determine it's own position in space without GPS or uplinked data?
2
Power and frequency units used in Deep Space Network XML data?
6
Does NASA's Deep Space Network sometimes listen to other space agencies' spacecraft "just for the heck of it" or other non-mission related reasons?
3
Does the Juno spacecraft have an "open signal, by design"?
4
Why are deep space "beacons" usually UHF, so low (in freq) that DSN can't hear them? And how unusual is it for a Mars lander to have an X-band beacon?
11
Is it possible for LEO satellites to detect a usable signal from regular mobile phones on the ground?