Sputnik 1 was a shiny metal sphere, as were it's immediate followers.

These days Earth satellites are generally rectangular prisms, either one or a few stuck together. Basically big metal chassis chock-full of electronics and instruments in rack-like structures, with solar panels and antennas as appendages, fixed or deployed.

But there have been many Earth satellites that were cylindrical in shape. ​

Many (if not most) were spin stabilized around the cylinder's axis and covered in solar cells roughly uniformly.

Example of a cylindrical Earth satellite covered in solar cells: 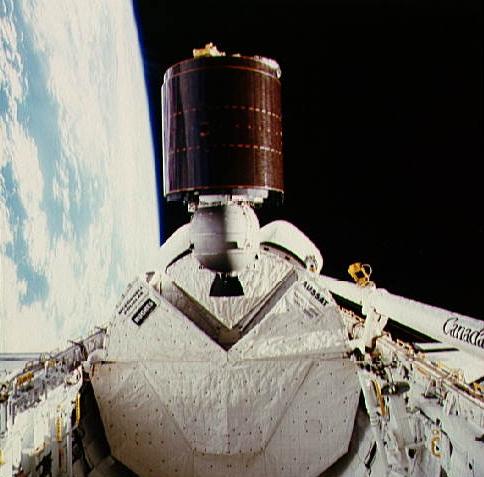 View of the AUSSAT-1 (now Optus A1) satellite after deployment on STS-51-I. Australia's AUSSAT communications satellite is deployed from the payload bay of the Shuttle Discovery. A portion of the cloudy surface of the earth can be seen to the left of the frame. Date: 27 August 1985

First U S satellite Explorer 1, launched February 1, 1958 and reentered in 1970. While the batteries lasted 4 months it was used to discover the Van Allen radiation belts. From Wikipedia:

A KH-11 Kennen spy satellite, USA-314, was launched aboard a Delta IV Heavy on April 26th, 2021. This is likely a strong contender for most recent at time of writing.

While the KH-11 remains a relatively secretive program, they are known to be closely related to the Hubble Space Telescope and are believed to be cylindrical, as Hubble (and many other things designed for the Shuttle) are.

Not the answer you're looking for? Browse other questions tagged artificial-satellite design communication-satellite earth-observation spaceflight-firsts or ask your own question.

4
How efficient was Telstar's solar cell configuration, compared to a flat panel?

13
Is the first Russian satellite still beeping?
3
Elevation Angle from Earth Station antenna to Mars
18
Why are rockets cylindrical?
8
What was the first practical use of a satellite constellation?
30
What would be the first noticeable consequences to the general public of widespread satellite destruction?
5
Why were Europe's first few satellites so stylish? Why the pronounced alternating white and black stripes?
4
What was the first use of analog to digital conversion in a satellite?
0
First satellite dispenser?