How to calculate the height above the horizon of a geostationary satellite on a given latitude?

Geostationary communication satellites are useful because they are visible from a large area of the earth's surface, extending 81° away in both latitude and longitude.

A diagram showing the cross section (longitudinal section) of the earth at the same longitude as the geostationary satellite is shown below. 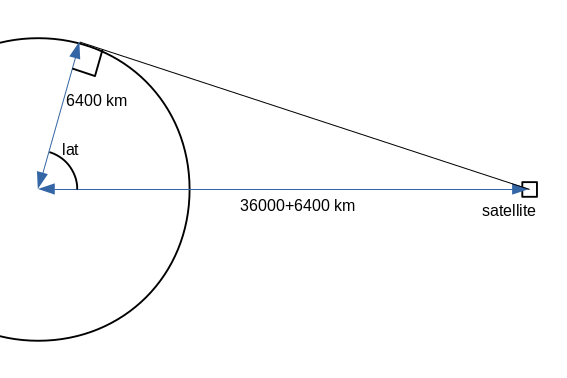 A location from the the geo stationary satellite aligns with the horizon is marked. Its latitude is also marked in the picture. At higher latitudes, the satellite is below the horizon.

Instead if we imagine that the view in the picture is by an observer in space above north pole, then the diagram shows longitude and so the 81 deg is applicable to longitude also; but only at the equator since the cross section was made at the equator.

In fact, a tangent line drawn from the satellite to the earth's surface traces out a cone of half angle 90 - 81 = 9 deg.

Not the answer you're looking for? Browse other questions tagged artificial-satellite mathematics geostationary earth or ask your own question.