Why does the Crew Dragon seem to rely primarily on a low bandwidth downlink for voice communications?

What are the particular reasons that the Dragon Capsule is not communicating via Starlink...

As @JörgWMittag points out the capsule orbited at an altitude higher than the Starlink satellites.

The Starlinks currently have three types of internet-related communication:

They just don't have the hardware to talk upwards to spacecraft orbiting above them, and they might not be able to maintain communication with something below them moving at orbital velocity. It's not that it wouldn't be possible, it's just that it would require different and more complicated operation than talking to fixed points on Earth's surface registered to known customers.

...or that it seems that the audio and video downlinks from the Dragon Capsule are on separate streams?

It is most likely that for the purposes of the live broadcast the far lower bandwidth audio is transmitted over a different and more reliable channel than the video so that if the video link drops out the audio (and therefore the program) can continue and a frozen image will still appear.

It's common/normal to process audio and video separately, thus we still use those clapperboards or some facsimile thereof even in the 21st century to synchronize separate audio and image channels. 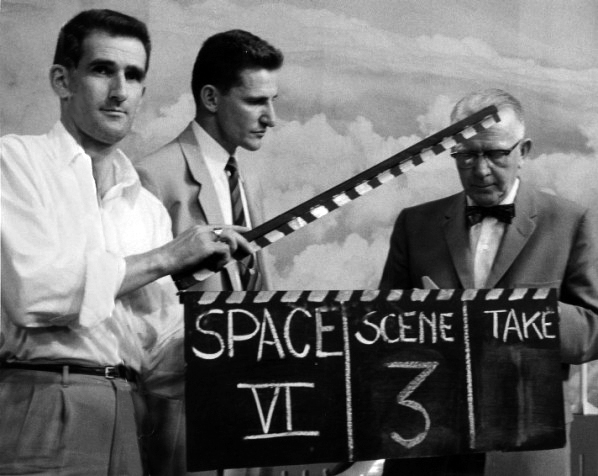 Man with a clapperboard as a scene is ready to be filmed. Production shot from KUHT-TV's Doctors in Space program with Drs. John Rider (center) and Hubertus Strughold (right).

Why audio/video on the Dragon Capsule are on separate streams / limited bandwidth?

An apparent example of these broadcast characteristics can be seen in the Inspiration 4 live orbit broadcast starting at about 10:17

I have not seen enough Dragon live orbit transmissions to know how that broadcast compares with more "typical" missions, and note that Inspiration 4 also had lower priority than other missions on the NASA Near Space Network.

For Inspiration4, NASA provided communications between the ground and capsule through the Near Space Network. This connects missions with various agencies and commercial entities up to two million kilometers (1.24 million miles) away from Earth. This network brings down around 30 terabytes of data per day.

Jared Isaacman, the missions’ funder and a passenger on board, explained on Twitter that the crew only had limited opportunities to use the network, remarking that they only had so many ground station passes to transmit video because NASA and other agencies had priority....

Why doesn't dragon communicate via Starlink

Starlink was not a priority - Dragon was built for working with NASA so designed for its communication networks.

@uhoh's answer also points out that Starlink's design is not primarily oriented around communicating "upwards" to a space craft.

However, shortly after the Inspiration 4 mission landed, Musk indicated that Dragon to Starlink communication is likely in the future - https://mobile.twitter.com/elonmusk/status/1439035515517509636: 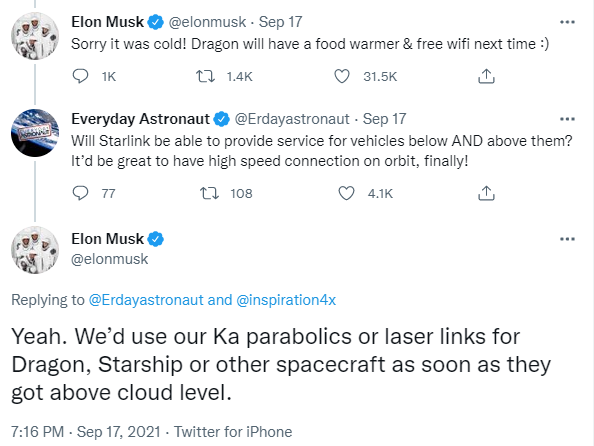 Not the answer you're looking for? Browse other questions tagged spacex radio-communication dragon-v2 starlink or ask your own question.

7
Why does SpaceX not use the Crew Dragon for CRS missions to test it?
15
How much of Dragon might have survived the explosion of CRS-7 and for how long?
2
Real time communications in space
8
Purpose of side holes on SuperDraco pods of DM-1 flight Dragon 2 capsule
6
What exactly happened to crew dragon on 4/20?
10
Is the Starlink array really visible from Earth?
12
Is Crew Dragon flawed? Is it just an improvisation with no future?
2
What do "initiate dragon safe haven" and "close all centerline hatches" and "next two crossings" mean?