Was the Lunar Topographic Camera ever used?

However, more detailed photography was required to evaluate the rougher sites proposed for later lunar-landing missions; consequently, the lunar topographic camera ( LTC ) (fig. 26) was introduced on the Apollo 13 mission. The LTC is a 5-inch-format recurrence-type camera with an 18-inch-focal-length fixed-focus lens incorporating image-motion compensation and capable of continuous overlapping strip photography. The camera was designed for mounting in the command module hatch window and operation within the command module environment. This design approach considerably simplified the spacecraft interface and crew operational requirements, which were major factors in procuring this camera in the short time required and within the budgetary restrictions. Unfortunately, the LTC was not used for lunar photography on the Apollo 13 mission, because the spacecraft did not attain lunar orbit. Reference 14 contains a detailed description of this equipment, and a photograph of the LTC system and the command module hatch mounting is shown in figure 27. 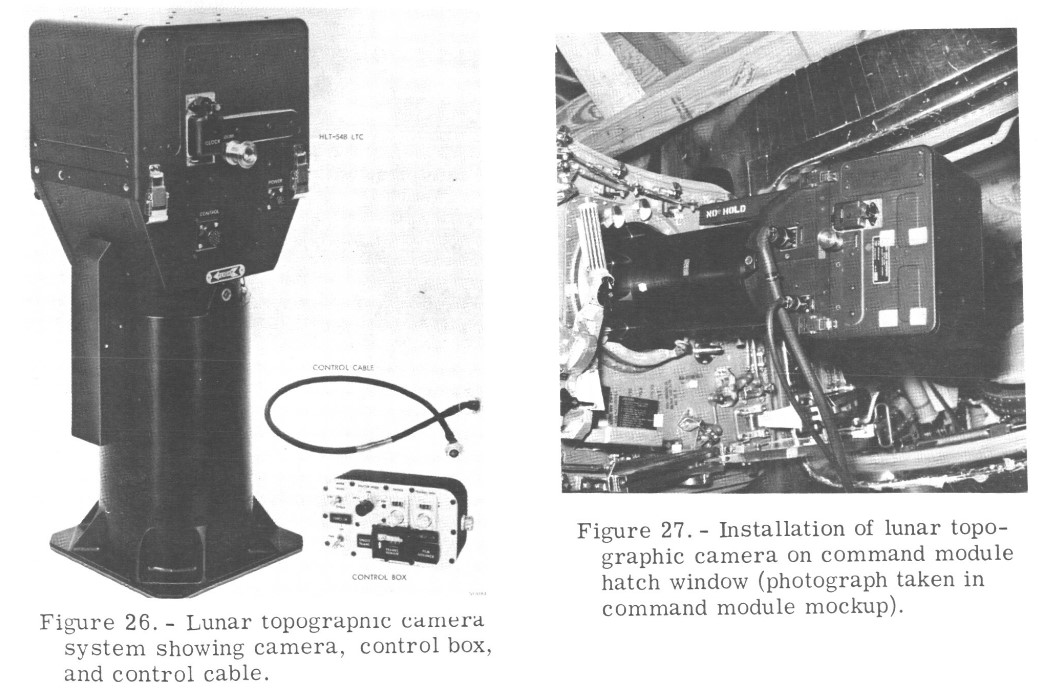 The lunar topographic camera ( LTC ) could not be used on Apollo 13, was the LTC ever used during later Apollo missions?

Hycon Lunar Topographic Camera.This electrically operated camera, which was carried aboard the CM, was a modified KA-7A Aerial Reconnaissance Camera, which, when used, was mounted in the crew access hatch window. A remote control box and interconnecting cable provided automatic mode or strip photography or manual mode for single frames. Variable Forward Motion Compensation (FMC) allowed for the spacecraft orbit motion. For each frame exposed, a small clock showing the day and time was simultaneously exposed to the side of the frame. This photography was intended to support the objective of obtaining high-resolution photography of future landing sites and areas of scientific interest. A camera malfunction partway into the mission caused the shutter to operate continually. This resulted from a transistor failure caused by a sliver of aluminum that became lodged and shorted the system on the shutter pulse switching circuit. Also, the lack of a continuous pulse, which activated the focal plane shutter, caused an intervalometer anomaly resulting in multiple exposure of the same scene. In addition, this same region of the film was overexposed approximately two stops.

The lunar topographic camera (LTC) malfunctioned and only 193 usable photographs were recovered from the two rolls of 5-inch film.

In addition, photography of the moon is accomplished with the lunar topographical camera (LTC).

NASA rebranded it "Lunar Topographic Camera" LTC. It was originally to fly on the last three H-class missions: Apollo 13, 14 and 15. The first got its incident, on Apollo 14 the camera failed after 200 pictures, and then Apollo 15 become a J-class with a SIM bay (and PanCam ? can't remember).

Unlike PanCam it was mounted inside the Command Module, looking through the hatch window. One advantage: no EVA to retrieve the film. One issue: it was huge and took an entire astronaut seat when deployed.

The camera then flew on Skylab and was called Earth Terrain Camera.

It had pretty good performance, only slightly worse than PanCam.

Seems the infamous "Skylab Area 51 incident" happened with this camera ; not with the hand-held ones. And this probably is the reason why the NRO made a fuss about it !

Some of the LTC photos on collect space

A grand comparison of an LTC image to images by Chang'e and Kayguya/Selene:

Made by Paul of collect space.

So the LTC was used on Apollo 14 and Skylab. Use on Apollo 16 is doubtful.

2
When was stereoscopic photography first used intentionally on solar system body?
5
Was the lunar module computer in the ascent stage or the descent stage?
19
Usage of Apollo Lunar Surface Hasselblad Camera with 500 mm lens?
5
How many Lunar Surface Hasselblad cameras were left on the Moon?
7
How were Apollo spacesuits cooled during simulations/rehearsals on Earth?
9
Why would the Apollo Lunar Module pressure dump (to space?) valve have a bacterial filter?
4
Was the kill-the-moon-bugs disinfectant the same as the kill-the-Earth-bugs disinfectant?
4
What did the Apollo 12 multispectral Four-Camera system look like?
4
Why were the openings of the LiOH canisters in Apollo different shapes in the first place?
6
How (the heck) was coherent synthetic aperture radar (SAR) implemented using photographic emulsion aboard Apollo 17?