What is the heat shield refurbishment procedure for a crew Dragon capsule?

How, specifically, is the heat shield replaced or refurbished? More precisely... How do they know it will work for the next mission? :-P

Disclaimers: This answer provides some more details about the engineering problem of trying to reuse an ablative heatshield. This discussion/analysis could arguably by better suited for the question What are the major challenges faced in designing a reusable heat shield? but I think the wording of that question and existing answers precludes ablative heatshields. The proceeding analysis is also specific to Crew Dragon/Dragon 2.

Second, it should be noted that Space-X hasn't actually done this yet (reuse the forebody heatshield for Crew Dragon/Dragon 2). From recent United Press International article:

NASA gave a detailed update this week about the capsule's refurbishment for a second crewed flight. [...]

NASA's process to recertify a previously flown capsule, along with upgrades made by SpaceX, gives the space agency confidence, Steve Stich, manager of NASA's commercial crew program, said Monday during a press conference.

The capsule as refurbished includes some new components, Stich said, such as parachutes and a heat shield.

And from this recent WCCF Tech article:

When asked about her company's plans for reusing the Dragon spacecraft's heat shield, [...]

Her [...] response to the question was as follows:

[...] we do look at all of our components and what can be reused, what we might make new. So the heat shield we really think of it as two components. There's the backshell or the laminate and then there's the thermal protection tiles, the PICA tiles that go on [the forebody]. So yeah we look at reuse for both of the items. I believe our most recent mission, again trouble thinking in public, I think our most recent mission had a reused heat shield laminate. But yeah both of those hardware items are in the process of going through evaluation for reuse.

Third, given that the forebody heatshield material PICA-X is a) proprietary and b) derived from "NASA's PICA" developed by NASA Ames in the 90's, I will be using "NASA's PICA" with its well characterized (and public) performance as analogous to PICA-X. Just keep in mind that PICA-X has (unquantified) better performance than PICA.

I'll start by characterizing the heating that the Crew Dragon/Dragon 2 capsule experiences. This is informed by the entry trajectory it follows, see my answer to Dragon re-entry flight profile? for the baseline trajectory for what follows.

NASA Aerothermodynamics Course Lecture Notes has all of the equations I used to model stagnation point heating:

Note that the radiative equilibrium assumption means we are neglecting the energy transferred to the heat shield material at this point (see slide 28 of Aerothermodynamics lecture for justification).

For the reference trajectory of Crew Dragon/Dragon 2 this looks like: 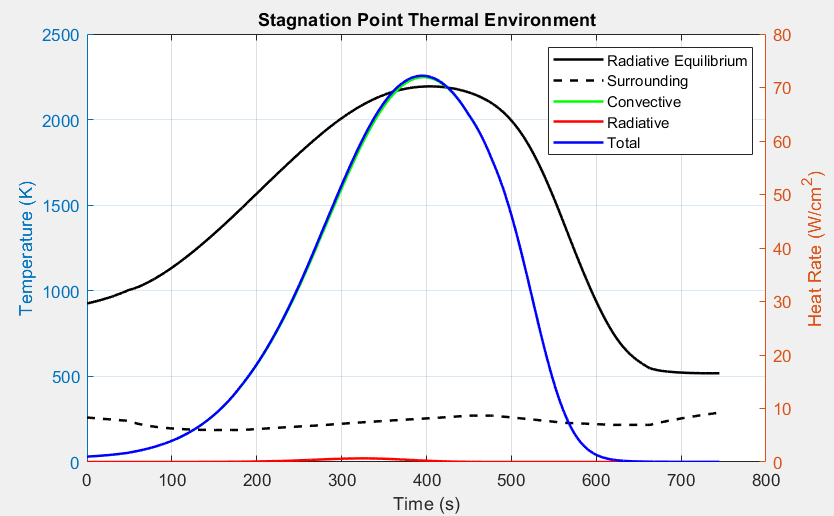 where the coloured curves are heating rates, right axis, and the black curves are temperatures, left axis. Disregard the elevated initial & final heating, this is an unintended 'bug'/incompatibility between the atmospheric and convective heating models (but does make the modeling more conservative).

I used the nose radius, $R_n$, as a fudge factor to make the maximum 'cold wall' temperature about 2200 K or 3500°F as given in the Demo-2 splashdown livestream and in this NASA Spaceflight article.

A heat shield material's performance is constrained by its mechanical (aerodynamic pressure/loads) and thermal (heat flux) limitations. A convenient way to visualize the 'difficulty' of an atmospheric entry is to plot these parameters against each other (with the performance envelope of PICA from Agrawal, P. et al. 2016): 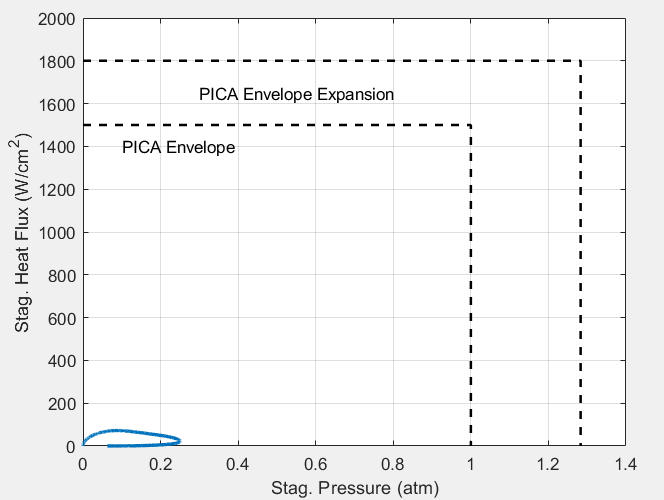 This plot definitely leads to some optimism around reusability of the ablative heatshield as PICA (let alone PICA-X) is not being stressed anywhere near its limits for a low-Earth orbit return mission.

Unfortunately, that's about as rosy as the outlook for reusability gets for a few reasons:

It goes without saying that an ablative heatshield ablates. More specifically in the case of PICA; the phenolic resin undergoes pyrolysis leaving behind a charred carbon substrate surface that also recedes towards the bond line/interface between heatshield and capsule. This recession rate depends, in general, on the heating and pressure environment of the vehicle (i.e., the plot above). I created an engineering model I dub the plane of ablation; a linear surface fit of recession rate data from Milos, F. et al., 2012: 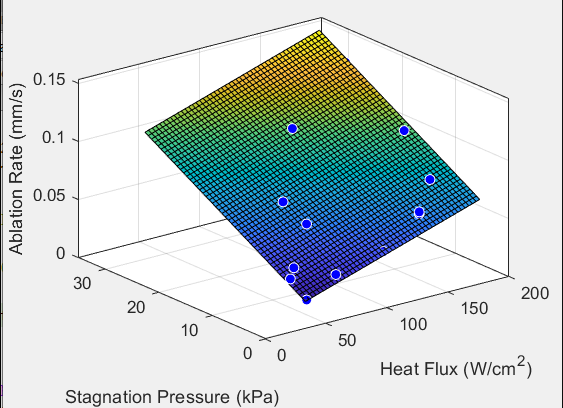 which is a reasonably good fit when viewed in plane(s): 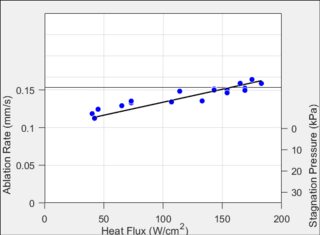 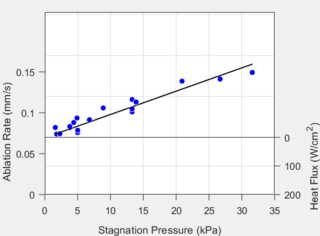 For the reference trajectory; this yields a nominal, zero-margin, recession distance of 2.2 cm to which upwards of a 50 % safety margin could be placed, though this varies. Repeated use would quickly whittle away a heat shield that is only centimeters thick to begin with, even ignoring the un-recessed thickness' primary function: insulation.

The un-charred (virgin) heatshield material serves to insulate the capsule from the heat faced by the surface of the heatshield. The typical engineering design constraint is the maximum 'bondline temperature' or the maximum temperature the adhesive connecting the PICA(-X) to the capsule structure can handle. Using methods modified from slides 104-110 of the aerothermodynamics lecture a nominal total thickness was calculated to be 10.5 cm: 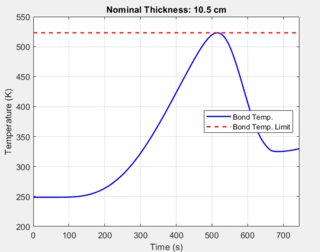 which after one use and a 'loss' of 2.2 cm would yield this catastrophe at the bondline: 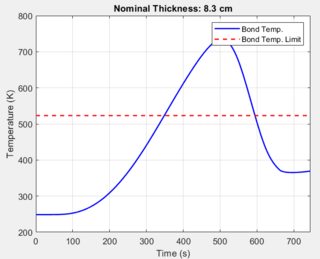 This very interesting poster shows that after splashdown the porous charred region absorbs a significant amount of salt (~25% by mass) from the sea water. I have no idea what kind of affect this could have on future performance of a heatshield but I think a safe assumption is that it would not be beneficial.

Space-X has not demonstrated reusability of the forebody heatshield (circa late 2021). The path to reusability is impeded by the fundamental mechanisms of an ablative heatshield; it ablates away and requires a certain 'un-ablated' thickness as insulation. A telling sign of this reality is Starship's (current) use of a non-ablative thermal protection system. (see: this answer)

To answer the question (finally, though severely last luster-ly) in the present context; the heatshield is fully replaced each mission (newly built). Space-X knows it will work because the previous one did and it was built the same way for the same task (plus ~decade or engineering work on it prior).

This is of course subject to change as Space-X works towards reuse of the forebody heatshield.

Not the answer you're looking for? Browse other questions tagged spacex reentry reuse dragon-v2 heat-shield or ask your own question.

8
What are the major challenges faced in designing a reusable heat shield?
15
What improvements have SpaceX made to their proprietary Phenolic Impregnated Carbon Ablator (PICA-X) heat shield?
3
Dragon re-entry flight profile?
3
Starship reentry velocity on return from Mars: What are the options

10
How does the surface area of a heat shield impact the ideal angle of attack for reentry?
6
What is the maximum velocity at which Soyuz TMA-M may transit through Earth' atmosphere at reentry without a heat-shield?
15
Dragon V2: How many times can the spacecraft be reused? Is the spacecraft's heat shield reusable?
8
What are the major challenges faced in designing a reusable heat shield?
25
Why was the Friendship 7 Mercury heat shield detachable?
3
What will the heat shield on the BFS be made of
8
What is the material and reflectivity of the surface of Parker Solar Probe's heat shield that faces the Sun?
5
Did the heat shield of the Vostok 1 capsule ablate during reentry?
7
Why is the Heat Shield of ESA's Solar Orbiter Black in colour?