Why wasn't the high-speed rotation regime for Ingenuity tested on Earth?

On the NASA website, it says that the propeller on Ingenuity will need to spin faster than what has been done before during all of the previous tests to accommodate for the rarefied atmosphere during the martian winter.

they will have to spin faster than we have ever attempted with Ingenuity or any of our test helicopters on Earth.

Why weren't any high rotation speed tests made on Ingenuity (or on an engineering model) done on Earth? It seems very unlikely that the engineers would not anticipate the effect of the atmospheric density variations.

I understand that the atmosphere isn't the same on Earth, but there are chambers that can reproduce the martian atmosphere where spacecraft can be tested (I remember reading about one such chamber in Germany, but I can't recall the exact place). So why didn't we test Ingenuity at 2800 rpm in a martian-like atmosphere before sending it to Mars?

Ingenuity is a low cost technology demonstrator. As a technology demonstrator, NASA and JPL cut lots of corners to keep the cost low (low by NASA standards, only \$80 million US compared to the \$2.2 billion cost for the rover). Ingenuity was planned to make just five flights during the first few months of the mission. If it had fallen short of this goal of five flights by a flight or two it probably would still have been deemed a success. It successfully completed those first five flights, with one incident from which recovery was possible. It has since made eight additional successful flights, far exceeding expectations.

It transitioned from being a mere technology demonstrator to being an operational aid after that fifth successful flight. "Operational aid" means it can be used in a non-mission critical sense to help scout paths for the rover and to scout targets of interest. It will never be made mission-critical; it was not designed for that. It was designed as a technology demonstrator.

One of the corners that was cut was to design for the benign atmospheric conditions that were expected in the few months after landing. Designing and testing for the not so benign atmospheric conditions many months after landing would not have been consistent with the technology demonstrator nature of the project. Doing so would have increased the costs by quite a bit, and it wouldn't have made sense.

Since Ingenuity has proved the viability and usefulness of a Mars helicopter, possibly sacrificing it to see if can survive making the rotor spin so fast that the blade tips are moving close to speed of sound makes sense. The helicopter will be essentially dead if the change isn't made, and may well be dead if the change results in a failure.

But if it succeeds, the helicopter can be continued to be used as an operational aid -- at least until the helicopter fails, possibly for some other reason. That failure (and it will fail eventually, almost certainly well before Perseverance fails) will not detract from what Ingenuity has already done.

A comment suggested to save Ingenuity for better weather in the future. That would be a very long wait. The graph below shows why waiting is not an option. 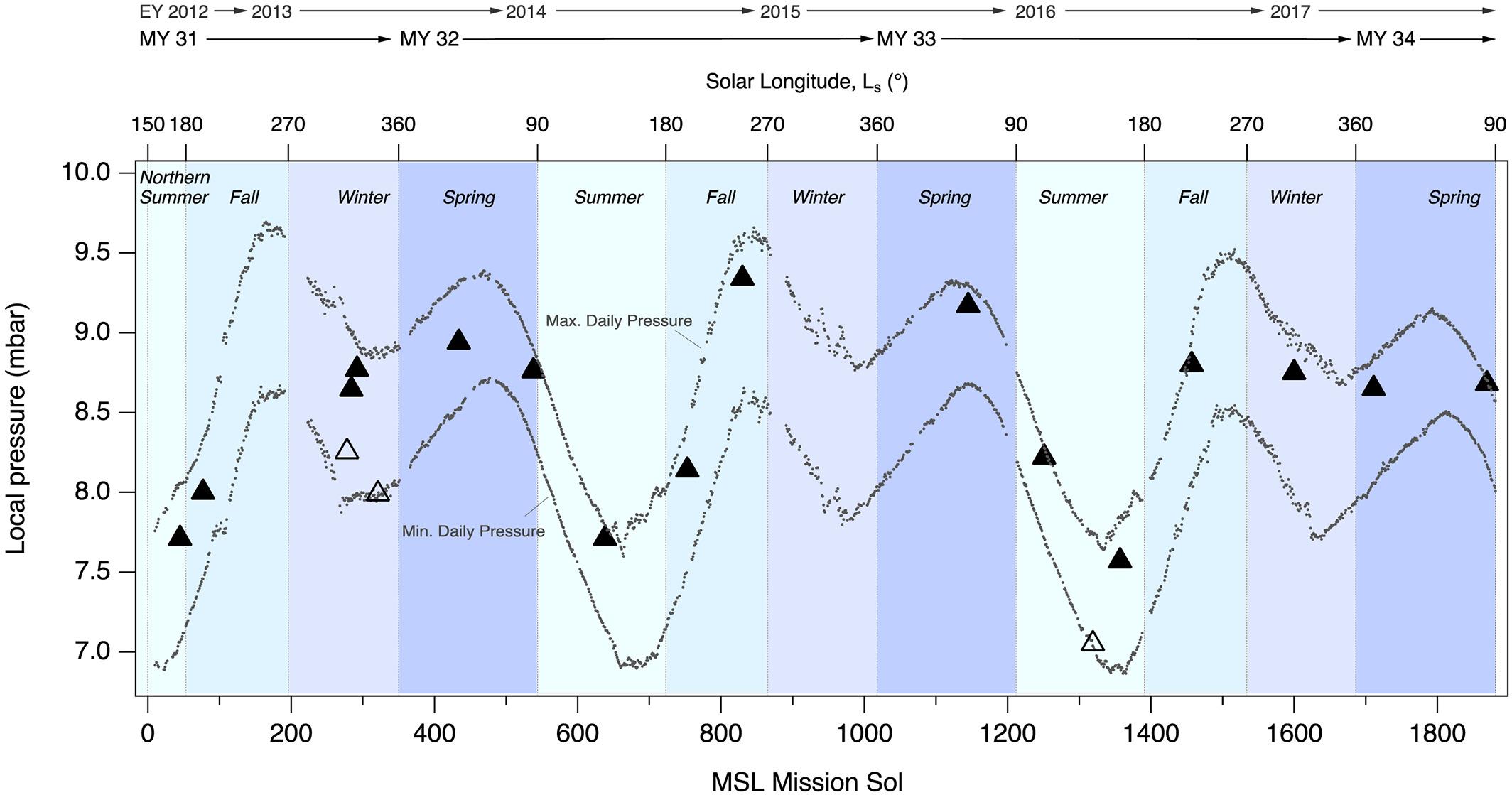 But then atmospheric pressure began to fall. By the northern hemisphere summer equinox on August 25, 2021, the fall was in full decline, and will continue to decline for the next 100 days or so after August 25. The atmospheric pressure will remain below the August 25 level for another 100 days after the late summer minimum.

Since transmission of commands to and data from Ingenuity requires relativity close proximity to Perseverance, waiting would require the rover to remain near its current location for the next five months. That would be highly counterproductive to the overall goals of the rover's mission. Waiting is not an option.

The answer is easy, it was given in your link to the NASA website:

The difference may seem small, but it has a significant impact on Ingenuity’s ability to fly. At our lower design limit for atmospheric density (0.0145 kg/m3), we know that Ingenuity has a thrust margin of at least 30%. Thrust margin refers to the excess thrust that Ingenuity can produce above and beyond what is required to hover. That additional thrust is needed on takeoffs and climbs, during maneuvers, and also when tracking terrain with varying height. But if the atmospheric density were to drop to 0.012 kg/m3 in the coming months, our helicopter’s thrust margin could drop to as low as 8%, which means that Ingenuity would be operating close to aerodynamic stall (a condition where further increases in the blade’s angle of attack does not produce more lift, only more drag).

We will begin by performing a high-speed spin of the rotor without leaving the ground, reaching a peak rotor speed of 2,800 rpm (more than a 10% increase relative to our prior Mars experience of 2,537 rpm). If all goes well, we will follow this with a short test flight at a slightly lower rotor speed of 2,700 rpm.

So ingenuity was designed and tested for flights at atmospheric densities between 0.0145 and 0.0185 kg/m3. It needs a thrust margin of at least 30 %. Without that margin, ingenuity might be able to hover some centimeters above ground, but the margin is needed to do a real takeoff and to climb at least some meters.

A helicopter rotor is exposed to very strong centrifugal forces. These forces increase with speed. The rotor is designed for a certain maximum speed. If you test it above this maximum speed it is a destructive test. Of course there should be a safety margin between theoretical maximum speed and nominal speed limit.

Not the answer you're looking for? Browse other questions tagged atmosphere testing ingenuity or ask your own question.

2
Minimum size meteoroids for meteorites on Earth, Mars, and the Moon?
12
Why is the Karman line for Mars defined higher than for Earth?
35
Why was AMOS-6 mounted on the rocket for a test fire?
33
Why is there any launch window at all for the Falcon Heavy test flight?
15
Why wasn't the phosphine in Venus' atmosphere detected by space probes?
2
Why wasn't there a 2nd attempt for the Viking-DS (VDS) test payload before the real Viking 1 and 2 were launched?
12
How did Ingenuity get such a sharp image of the shadow of its own high-speed helicopter blades?
2
Could Ingenuity use the shadow of its legs for navigation to fly autonomously to the sample cache depot location?
9
Why shadows of the blades on Ingenuity navcam photos looks brighter than shadows of the legs?