How are upper stage engines chilled down?

To chill down an engine, cryogenic propellant is pushed through the engine. This is fine for the first stage because the chill down propellant can just flow out the nozzle and on to the ground/the atmosphere. The upper stage, however, is closed up. How do you chill down the upper stage engine if there is nowhere for the propellant to go after it exits the nozzle?

The S-IV stage on the Saturn I vehicle had overboard vents for the LH2, and fabric blowout panels for the LOX. One of the LH2 vents is indicated, the blowout panels are the half-ovals at the lower end of the stage. 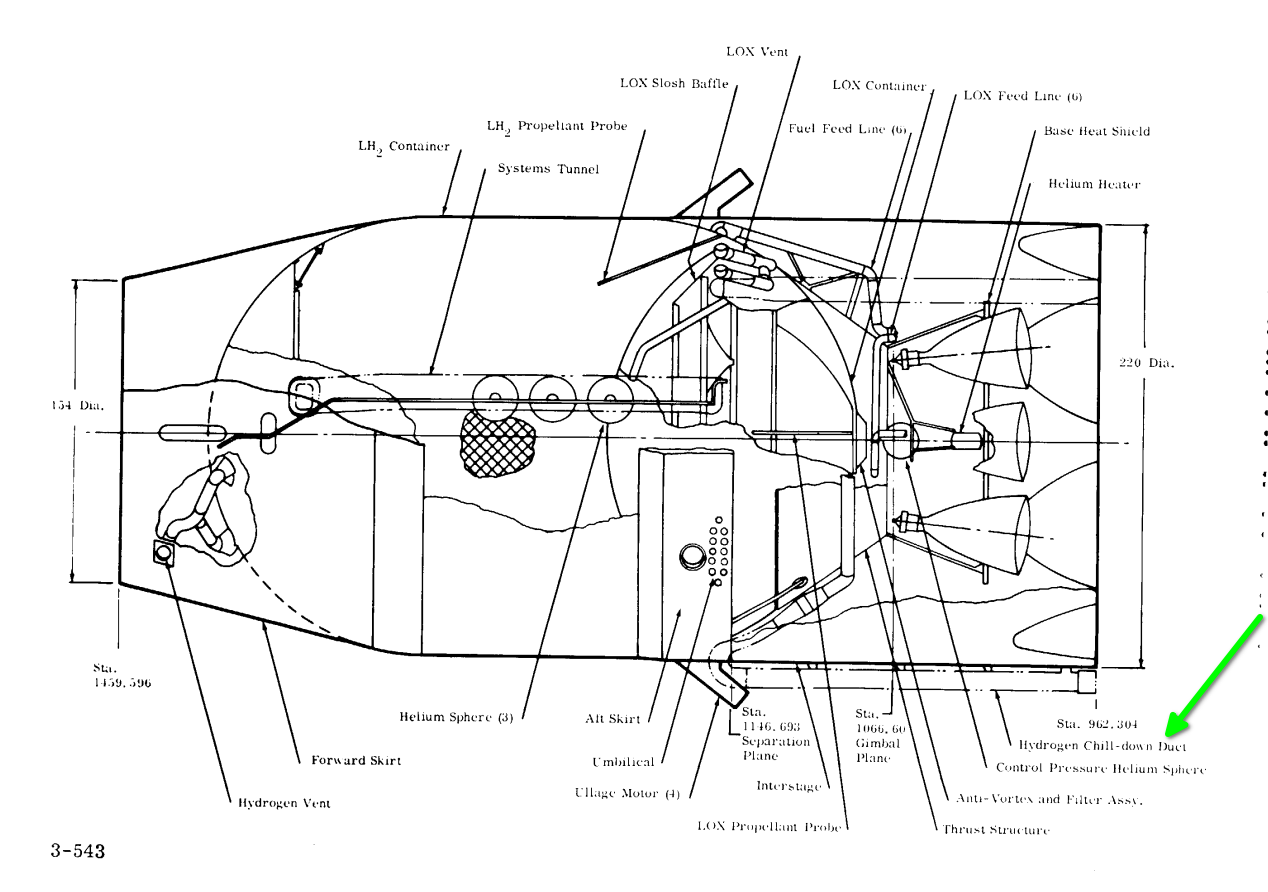 A chilldown of the S-II stage engines begins prior to liftoff with the chilldown of the thrust chambers. Propellants are circulated though the pump and feed lines during first stage operation until a few seconds before first plane separation.

The engine propellant pumps and gas generators must be chilled prior to start. This is accomplished during S-IC boost phase. LH2 is circulated, Figure 22-17, by means of stage mounted pumps through the engine LH2 feed lines, engine LH2 pumps, and gas generator LH2 bleed valves and then returned to the container. LOX is circulated, Figure 22-18, by means of thermal convection through the engine LOX feed lines, engine LOX pumps and gas generator LOX bleed valves and returned to the LOX container.

There is plenty of space to go for the propellant. For example, the nozzle of a vacuum engine itself is a giant empty cone. Then there's the interstage.

On rockets which perform hot staging, the interstage must necessarily be open.

And if all else fails, you can always just punch a hole into the interstage. I mean, obviously if someone builds a rocket, they will think of this. It's not like they perform the first orbital launch and only realize 3 minutes into flight that they never figured out how to chill the second stage engines.

Not the answer you're looking for? Browse other questions tagged rockets upper-stage or ask your own question.

6
What is a throat plug used for?

17
How do rockets prevent rear-ending after stage seperation?
5
Could upper stages take down space debris as a 2nd mission?
7
Upper stage structural loads on ascent?
3
Orbital ATK’s Cygnus 2nd stage exhaust plume
4
Could a "nuclear turbo-jet" be built?
18
Why is the flame of the Falcon 9's 2nd stage (nearly) invisible?
8
ULA's ACES upper stage with IVF - Why are they using internal combustion engines?
3
Isentropic flow through a rocket nozzle and constant mass flow rate
5
How much debris will hit the ground from the Long March 5B compared to the debris from a GTO upper stage?