What about gathering water ice from Saturn's rings?

Saturn's rings are almost pure water ice in nice manageable chunks from specks to boulders a few meters across. Assuming there is something truly useful to do with it - once again talking about orbital depots or human bases on the moon - is it feasible to collect that ice and drag it back to the neighborhood of Earth?

Compared to snagging asteroids passing through the neighborhood or collected at the Trojan points like Planetary Resources plans, or shipping water from Earth, it seems like it could have advantages. We know exactly where it is, it seems easy to get to, there's plenty of it, and it's in small chunks. What would be the problems?

For a Hohmann transfer to Saturn, I get 15.7 km/s for both burns. The transfer time is also a simple formula. I obtain roughly 6 years.

Compare to the lunar ice. It is roughly 2.8 km/s to get to, and the trip time would be a few days, even from Low Earth Orbit.

As suggested by the other answer, you could compare to Earth's surface. If we're using some reference frame far from Earth's surface, then it's nearly 12.8 km/s going up (EDIT: corrected from newbie mistake, LEO gets Oberth). But this gets complicated. The first 9 km/s is constrained by atmospheric physics. Although, leaving the moon also has a similar thrust-to-weight requirement placed on the rockets by gravity drag.

These numbers aren't totally fair to Saturn. If I use the edge of the rings (nearly the "F" ring), I get an orbital velocity of 16.6 km/s. In order to mine these rings, you'll need to follow a hyperbolic trajectory, and then do your final Hohmann burn when you're close to your destination, inside Saturn's gravity well. This will reduce the Delta V you'll need for the final burn. That'll reduce the final burn by a little bit. Breaking up the 15.7 km/s, the initial insertion burn is 10.3 km/s and the heliocentric circularization burn is 5.4 km/s. So we would need to correct this all for the Oberth effect, which is a multiplier of $\sqrt{1 + \frac{2 V_\text{esc}} {\Delta v}} $, sphere of influence assumptions, yada yada. That reduces the previous numbers to (respectively) 5.8 km/s and 1.4 km/s. Boy that was an unpleasant calculation, but the total comes to approximately 7.2 km/s.

It's true that mining the lunar ice would involve challenges that Saturn's rings don't have. But if the destination is close to Earth, those challenges would be more workable than the nuclear, ion, or whatever kind of drives that a Saturn hauler would involve. A similar tradeoff might present itself for other sources closer than Saturn, for instance, Jupiter trojan asteroids.

I won't dispute the quality of Saturn's ice. It is likely more pure than the alternative sources. It might also be in convenient size chunks. Importantly (in its favor) it can be delivered by drives with a low thrust-to-weight ratio. Any value would do for this, although there might be some Delta V penalty due to reduced Oberth effect. Solar electric would be penalized heavily due to the distance from the sun. Nuclear power sources are vastly superior at that distance. 9.5 AU --> squared means 90 times less power per unit area than near Earth.

The real problem is justifying that 6 year time frame. Who is going to wait 12 years for their return on investment? Now I grant you, because of the absence of a gravity drag penalty, it's possible that a ship of monstrous size could deliver huge quantities of ice. Because you're not dealing with any surface-to-orbit transition, your ship could be fragile, and your engine could have a low thrust. Given that, the only thing that scales directly with the payload is the propellant. If we can get something like 30 km/s reaction velocities, then it's believable that making the round trip would work... although only if you can cannibalize water for propellant, and at somewhat poor margins.

So, sure, there is a business case in a very specific scenario where we have a mature market for water in space, someone could reduce costs of procurement by making a ridiculous-looking bloated spaceship that runs the Saturn to Earth orbit route. I'm still not convinced that it would be better than other alternatives beyond the frost line, but most of those have angular clustering. A business might want deliveries more than once every year, and for that, Saturn versus Jupiter trojans (for instance) provide some seasonal diversity. But the advantage is nil except for with extremely large quantities. That raises the question - how could the depreciation possibly compete with lunar ice? If you can run regular ferries from lunar poles to orbit, that seems more economic unless your bloated Saturn ship could be much lower cost (because the lunar scheme has much higher trip frequency). Maybe it could. We can't really say. The biggest variable will be your rate of return. If you demand 6% rate of return, then you're effectively cutting the value of the ice in half over 12 years. This is why it's a hard sell, but that's not really the rocket science part of it.

Addition: Found the example of a "bloated spaceship" that I had in mind. Saw it on Atomic Rockets. Here is the original source. Apparently they had Phobos in mind. 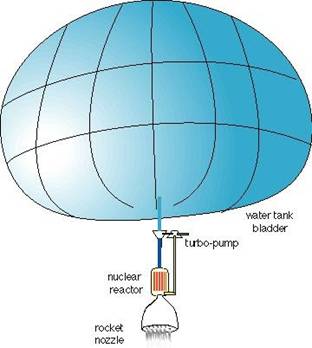 I have some problems with their off-the-bat assumptions. If Phobos has water, why doesn't Eros? I don't know these things. I'm doubtful that anyone else knows the bulk composition or the difficulty of refining the below-the-surface precious water of such inner system bodies. Myself, I would like to picture that "spaceship" with the bladder being 100x its above relatively size. These things will make a hot air balloon look lean.

It occurs to me that the answer to this question depends on what you want to get for your money. If you are only interested in the ice itself, in a source of water for use on Earth on in LEO, then other options are preferable.

However, if you wish to get greater returns on your investment in the form of ancillary benefits which themselves have value, both marketable and otherwise, then Saturn would seem to be a much better option. The ring system, including some of it's smaller moons, are a much easier target from an engineering perspective for manned or partially-manned operations.

This goes beyond the reduction in processing required to make use of the water in situ or for market, and includes such things as the radiation environment, available human-friendly day/night cycles/orbital periods and useable resources - one of which being the generation of electricity. If the interest is long-term, multi-purpose industrial infrastructure, Saturn is a much more favorable source than the moon or even the Trojan asteroids.

With potentially serious examination being undertaken of this kind of resource use by entities such as Planetary Resources and even the United States Government, it is important not only to consider what is best or even feasible, but what has the greatest likelihood of being funded or capitalized and actually occurring. In this light, multi-purpose endeavors could be the way to go.

I can't see how Saturn would ever beat Ceres as a source of water for inner solar system applications. You need a railgun or something to get things off Ceres and some way of cutting chunks of ice out of the ground, but the escape velocity is pretty low. Then you can use a low thrust tug in vacuum to put lumps of ice (no need to put a ship round them) on a trajectory to where you want them.

Saturn is not easy to get to. The Earth is already full of water, we don't need to transport ice from 10 AU away to home to have another whiskey on the rocks. Water fills the oceans and the clouds and the polar ices and the underground and even inside ourselves. It is actually a problem that we have too much water, flooding and tsunamis are common causes of catastrophic death. Saturn's water would be used where it is. We would build the X-factory over there instead of bringing home the raw materials.

Not the answer you're looking for? Browse other questions tagged water mining saturn rings ice or ask your own question.

2
How much energy is required to send a payload of 40 t from Earth's surface to LEO?

14
How dense are Saturn's rings?
7
What forms of water ice have been observed and verified in the solar system?
1
How will the Cassini spacecraft help constrain the mass of Saturn's rings?
2
What delta-v per orbit would a spacecraft need to hover next to Saturn's rings?
5
What kinds of instruments do you need to detect whether liquid water/ice is on a planet?
1
How do Saturn's rings affect the surface of the planet?
3
What would you see while falling into Saturn's atmosphere?