Assume we detected a 500 meter diameter asteroid hurling toward Earth at 10 Km/sec (about half the speed of the asteroid that wiped out the dinosaurs). Assume it has a density of 2.4 g/cm and that we detected it very far away, so we have 6 months before impact. We send a ship out to match speed and land on it. Fortunately, it's rotating very slowly, say once every two hours. We mount 100 Star48 rocket motors in a position that will be perpendicular to its current direction of travel when we light them. The combined specific impulse for 100 Star48s is 57.5e6 Kgf-sec. If the firing is successful, how much have we deflected its path?

There is currently an active question about a possible extinction level asteroid heading toward Earth. A nuclear explosion might break the asteroid apart. I would like to know if a rather low tech solution has any merit, or not.

Probably the first key point here, is that if an asteroid is detected 6 months out, it will be on it's final orbit, with geometry something like this 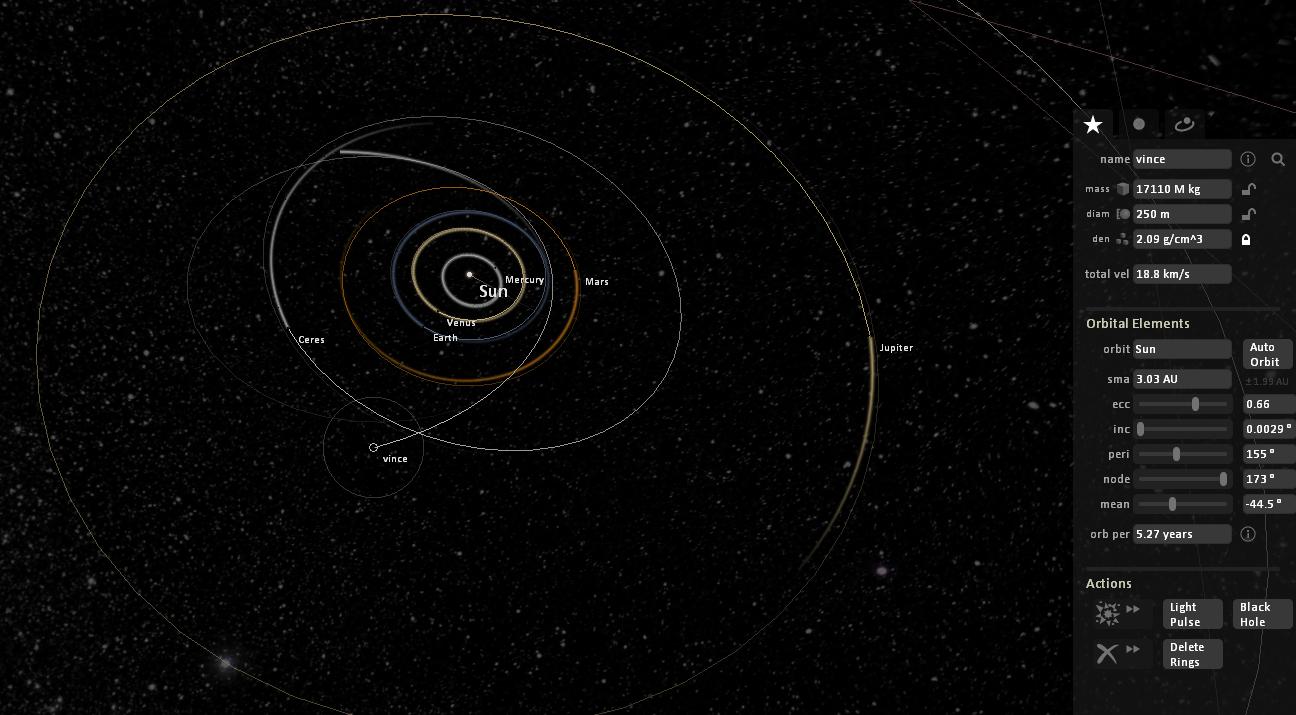 So any attempt to intercept is not doing fuel efficient transfer orbits which by definition take half an orbit period to complete, instead this will be a brute force maneuver first canceling earths orbital motion (30 kilometers a second), than establish a escape orbit up towards the impactor (~20kms) then on arrival traveling roughly opposite direction burn off that approach velocity and match with the impactor (18kms).

The maths includes a bunch of vectors but since one of the most capable rocket available got the 500kg New Horizons only around 17kms we can safely say we are not getting 100s of tonnes of payload into a soft landing with anything short of Project Orion. And if you have a Project Orion craft you can skip the star48s.

If you have multiple orbits worth of warning things become much more possible. You find a favorable launch window where the starting velocity of Earth helps rather than hinders, and make something approaching a classical transfer orbit with needed delta V under 10kms. This is of similar order of magnitude to a launch from surface to orbit, so if you want the 100 tonnes out there you need to assemble something like two falcon heavies, fully fuelled, in low earth orbit. Not totally impossible but a major undertaking.

Working with more warning also makes the course correction easier, since quite small velocity changes add up much more easily to give a miss, going off brendanLuke15's comment giving a velocity change of 4mm a second from the star48s this has 3 years to produce an effect, giving a naive offset of 378km in impact - not enough for an easy miss but using actual orbital dynamics probably enough to be useful. Or you can take 100 tonnes of nukes with you and turn the low density rubble accumulation into an expanding rubble accumulation that has 6 months to spread out.

If you really do have just 6 months to plan for a 500 meter impactor, it is still possible to get intercepts but practical rocketry means they are probably happening inside Earth's hill sphere doing something like a trans lunar injection, but to intercept the impactor rather than towards the moon. So any rocket capable of delivering a payload to the moon could be used. The aim would be to break it apart as much as possible so that you just have on asteroid mass of dust making nuclear winter in the atmosphere rather than chunks big enough to throw earths surface into the mix as well. The Castle Bravo test suggests it would take more than one bomb to do this, but a not impossible number.

As noted in this question finding these very large objects is relatively easy so the more concerning threat is the smaller city killer sized objects that are harder to track but also easier to do some combination of deflection and evacuation for even with limited notice.

Not the answer you're looking for? Browse other questions tagged asteroid planetary-defense or ask your own question.

25
If an extinction-level asteroid were to be detected, could we avert it?
4
How big an asteroid could we take out with an ICBM?

8
How much of the asteroid belt is discovered?
2
How much will Bennu rotate faster and faster with mirrors facing the Sun on its left side?
1
Could asteroid 2012 XE$_1$$_3$$_3$ become a moon of Venus with the aid of rocket engines?
2
How much asteroid can we divert from the Earth?
2
Can small asteroids in the asteroid belt be detected on the fly and how much of a threat do they represent for a human manned space mission there?
4
How big an asteroid could we take out with an ICBM?
2
Could a laser array and miniature light sails be used to deflect asteroids that are on a collision path with Earth?