Where are Ingenuity's two swashplates and six servos? I only see one of each in this NASA/JPL-Caltech photo

Ingenuity controls its position and orientation during flight by adjusting the pitch of each of the four rotor blades as they spin around the mast. Blade pitch is adjusted through a swashplate mechanism, which is actuated by servos. Each rotor has its own independently controlled swashplate, and each swashplate is actuated by three servos, so Ingenuity has six servos in total. The servo motors are much smaller than the motors that spin the rotors, but they do a tremendous amount of work and are critical to stable, controlled flight. Because of their criticality, Ingenuity performs an automated check on the servos before every flight. This self-test drives the six servos through a sequence of steps over their range of motion and verifies that they reach their commanded positions after each step. We affectionately refer to the Ingenuity servo self-test as the “servo wiggle.”

Question: Where are Ingenuity's two swashplates and six servos? I only see one of each in this NASA/JPL-Caltech photo.

The "C" annotation labels a servomotor, and the "D" labels a short cylinder as a swashplate. I'm lookin for a description and/or a an image to understand where the other swashplate and other five servos are. 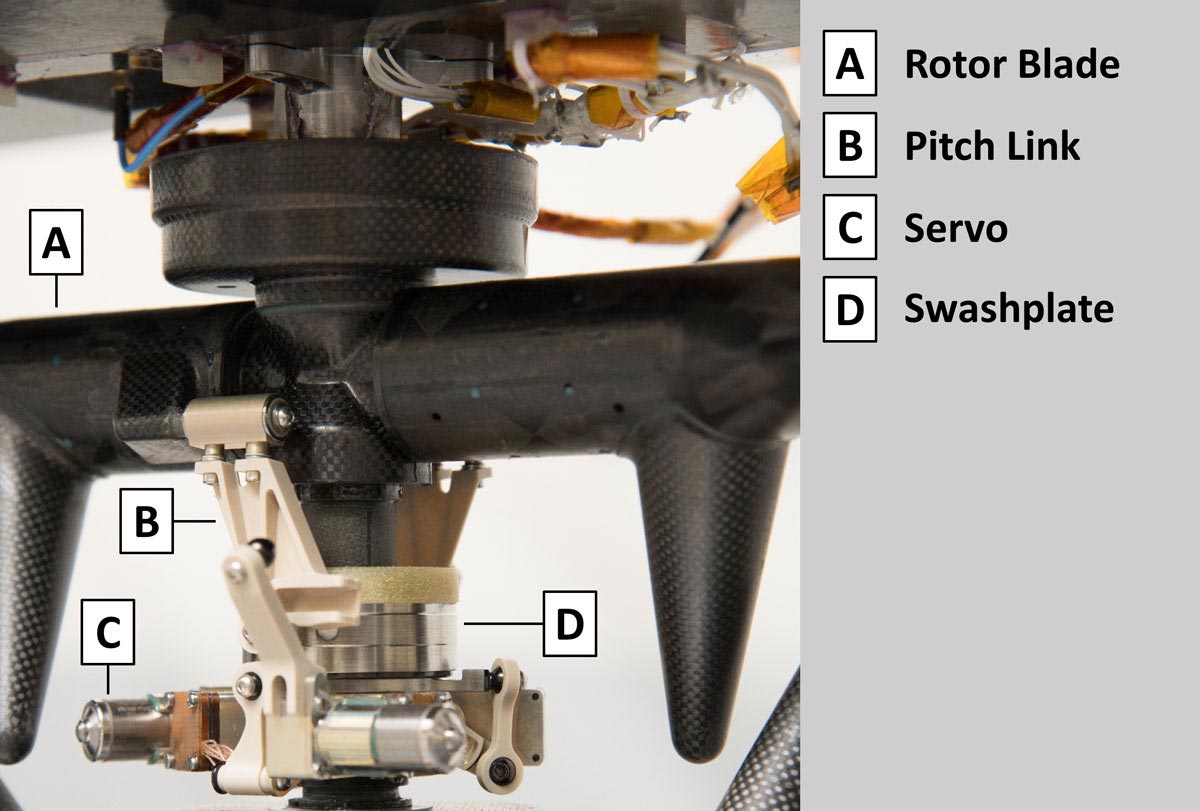 Ingenuity’s Upper Swashplate Assembly: The upper swashplate of NASA’s Ingenuity Mars Helicopter controls the pitch of the upper rotor blades as they rotate and is critical to stable, controlled flight. The swashplate is driven by three small servo motors. Credit: NASA/JPL-Caltech.

There are three servos visible in the photo, the one labelled "C" and two more aranged at 120 degree difference around the shaft.

The second swash plate and associated servos will be connected to the second rotor and do not appear to be in this image.

Not the answer you're looking for? Browse other questions tagged ingenuity helicopter or ask your own question.

13
How did Ingenuity get such a sharp image of the shadow of its own high-speed helicopter blades?
7
At the end of the test campaign, could Ingenuity be programmed to fly fully autonomously to the planned sample cache depot location?
5
Where is the uncropped version of this cool Ingenuity navigation camera GIF?
4
Just how preferable are afternoons for flying Ingenuity? Why?
4
Thermal batteries rather than battery-powered heaters for small craft on Mars; how much mass would it add, how much would it replace?