Are any Earth orbits in continual shadow of the Earth?

Do any orbits around Earth leave the spacecraft in permanent shadow? If not, what is the minimum amount of time that a spacecraft must be exposed to sunlight on average?

There is no orbit around the Earth that remains in permanent shadow. Such an orbit would need to have a period of one year, and that orbit would be too large to fit within the Earth's Hill Sphere, which represents a broad upper bound on the range of stable orbits around Earth.

In theory, an object near Earth-Sun L2 (at roughly 1.5 million km from Earth) could permanently be in Earth's shadow, but but being at Earth-Sun L2 is definitely not being in Earth orbit, and as Max Q Lagrange answered to another question, is too far from Earth to block the Sun completely. (Thanks, Engineer Toast, Naktibalda)

In general, on average, the best you can do is having the satellite spend a little less than half its time in the Earth's shadow, accomplished by having the object orbit as close to the surface of the Earth as possible. For a periapsis at 400 km over an airless, spherical Earth, this means a bit under 40% of the time in shadow. 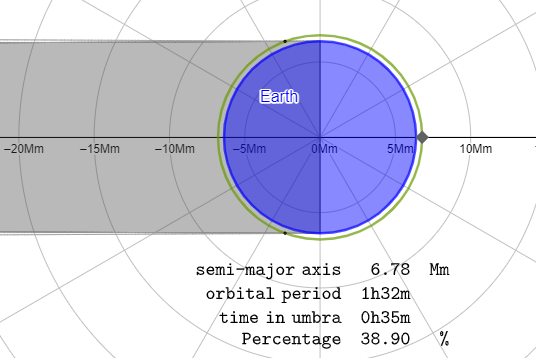 To answer CharlesStaats's question in the comments; Having a very elliptical orbit with the apoapsis in the Earth's shadow and using perturbations to keep it there doesn't help. The fraction of time that the satellite spends in the umbra continually decreases as orbital semi-major axis increases.

While the amount of time spent in the shadow initially increases as the semimajor axis does, so does the total orbital period, and the latter increases faster. Eventually, the narrowing of the umbra also comes into play, and the time in the shadow starts decreasing as well.

Raise the apoapsis to about the distance of the Moon, and the Satellite only spends about 5.6% of its time in darkness.

Geogebra Graph I made for the images, with semi-major axis slider

One highly reusable observation is the following: For any plane going through the centre of mass, a satellite must spend some part of its orbit on one side of it if it spend some time on the other side.

And unfortunately, we can draw a plane where all the shadow is on one side: 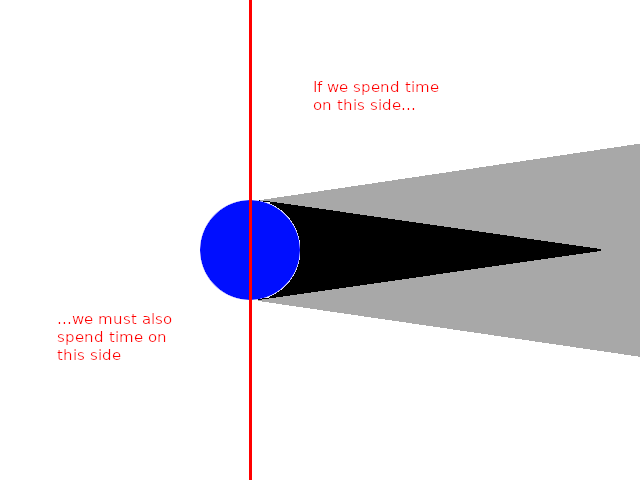 The only loophole would be that the shadow revolves around over the course of a year, so if the satellite had an orbital period of a year, it could follow the shadow. Sadly, these fictional "one year orbits" don't exist, as they are so far away form the Earth that the gravitational influence of the Sun dominates completely. Co-rotating points balancing the gravity of the Earth and the Sun is a famous mathematical result, but the shadow of the Earth does not extend so far.

34
What does the Sun-Earth-Moon system look like from the Sun-Earth L-2 point?
36
Why is JWST parked in sunlight, rather than using a nuclear battery?
4
Exoplanet orbitable in permanent umbra?
5
Would GRAIL be possible on more distant airless bodies such as Mercury and Callisto?
2
Are there any Earth orbits where the duration of eclipse increases with semi-major axis with all other parameters fixed?
1
Which Low-Earth Orbits Spend the Least Time With Access to Sunlight?

14
Are sun-synchronous orbits possible around any body?
17
Are some Halo Orbits actually Stable? (stable orbits about unstable Lagrange points)
8
How many orbits will it take for Santa to deliver all the presents?
3
Are low, polar lunar orbits in general relatively stable?
2
Parallel orbits around the Earth - effectively?
4
Can a Space Telescope orbit so it was always in the shadow of the Earth?
6
Can dust be in orbit around a spacecraft which orbits the Earth or Moon?
4
Exoplanet orbitable in permanent umbra?
2
Are there any Earth orbits where the duration of eclipse increases with semi-major axis with all other parameters fixed?
3
Different/better ways to calculate the shadow region passage of the satellite and the effect of orbital elements, other than shadow cone technique?