Are 3 points on an orbit enough to determine the shape of it in practice?

In a question about determining orbital elements from two points on an orbit, some discussion arouse regarding how many points are actually necessary, since two is not sufficient.

Determining a conic section requires 5 points, though one of them can be the central mass, so only 4 points on the orbit.

But are 4 points actually necessary in practice?

This polar equation seems to suggest 3 points are enough, though with arguably some extra assumptions: $$r = \frac{a(1−e^2)}{1+e\cosθ}$$

The only counterexample with ambiguous orbits I could come up with is "unrealistic", as it involves the phantom half of a hyperbola.

Does disregarding such purely theoretical trajectories reduce the requirement to 3 points on the orbit? 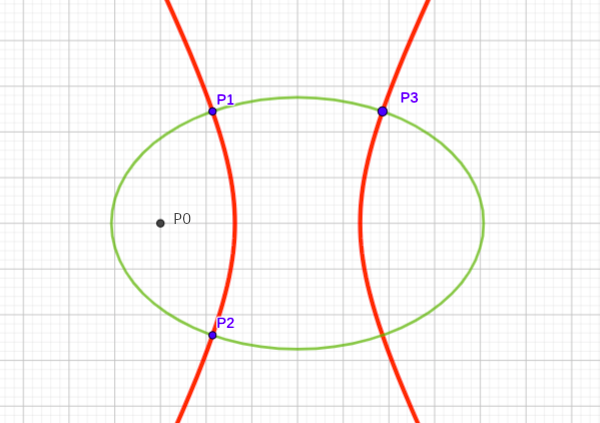 I believe the answer is yes, given one focus, and three coplanar points on the orbit, you can define the orbital shape, and obtain semi-major axis, orbital eccentricity, and the direction of the periapsis.

Since the three points must be coplanar within the orbital plane. I leave the exercise of converting the three coplanar points you have to orbital-plane coordinates as an exercise for the reader.

I wound up not solving the polar equations to do this, but instead, relying on the definitions of ellipses and hyperbolas, and a lot of help from GeoGebra:

Circular case: If all three points are equidistant from the known focus, it's a circular orbit.

Elliptical or Hyperbolic Case: Otherwise, for any pair of the chosen points, $P_1, P_2, P_3$, there exists a hyperbola that passes through the intended focus $F_0$. The ellipse or hyperbola that passes through the pair of chosen points must have both foci on that focal hyperbola; if it's a hyperbolic orbit, the focus will be on the same lobe. If it's an elliptical orbit it will be on the other lobe.

You can then examine the orbital ellipse and hyperbolic trajectory defined by the two foci. In most cases, all three points will lie on either the ellipse or the hyperbola, determining which of the two is the valid trajectory.

There are rare cases where the three points can be on both the hyperbola and the ellipse; but if an ellipse and a hyperbola share foci, they will intersect at only four points, requiring at least one of the points be on the non-physical phantom lobe on the hyperbola, disqualifying it.

Parabolic Case: If the secondary focus winds up at infinity, it's the parabolic case. Construct three circles around the points that intersect at the focus. The line that's tangent to all three circles is the directrix, use that and the focus to construct your parabola.

The Geogebra Graph used to create the above images can be found here: Geometric Three-Point and Focus Orbit - Shared All three points are freely draggable, and it only seems to stutter in a few cases.

An ellipse is defined as the set of all points in a plane where the sum of the distance of the point from the two foci is a constant : Twice the semimajor axis. The following equations assume the primary focus, $F_0$ is at the origin, and relate the semi-major axis and the x and y coordinates of the secondary focus.

Where $|P_n|$ denotes the distance of the point $P_n$ from the known focus, and $P_{nx}$ and $P_{ny}$ are the x and y coordinates of $P_n$ (I'm open to better notation on these, this is probably a bit confusing)

And the polar equation for the conic section is:

I've mostly been working this out through GeoGebra, and its numerical solver is really finicky on these, so I'm not entirely certain that this is correct, but it seems to work. It also works if the three points are on the hyperbola's phantom lobe.

If you want to fiddle around with it, you can do so here: GeoGebra: Three Point and Focus Fiddler

Dragging around point $P_2$ seems to be generally fine, but the numerical solver for the equations gets a bit stroppy if $P_1$ or $P_3$ are moved around too much. It's still a bit of a work in progress.

And if you know the order the three points are passed in, then, yes, you can figure out whether it's prograde or not, you can go back to 3D and determine the orbital inclination, the longitude of the ascending node, and the argument of periapsis.

If the time between two points is known, only two points are sufficient. The angle between these points should be larger than 0° and less than 180°.

Even if no distance information is available, an orbit can still be determined if three or more observations of the body's right ascension and declination have been made. Gauss's method, made famous in his 1801 "recovery" of the first lost minor planet, Ceres, has been subsequently polished.

Three points without distance information are sufficient too.

2
Determine the eccentricity of the orbit
6
Ascending node with zero inclination
6
Determine orbit type from TLE
4
How to determine the optimal orbit for a LEO satellite
4
Is Dawn's upcoming low periapsis orbit for XMO7 "resonant"?
7
Do Lagrangian points apply to eccentric orbits or binary systems?
2
How can you determine the nature of an object from its flight path angle, velocity, and radius alone?
0
Does the elliptical orbit have many periapsis points?
5
Do I have enough info to find the true anomaly of an orbit?
3
How to calculate the Lagrangian points positions?