There is a comprehensive article on Wikipedia on the James Webb telescope. It includes a statement regarding the operational lifetime being nominally five years and optimistically ten years. However the two following statements still seem contradictory.

"JWST needs to use propellant to maintain its halo orbit around L2, which provides an upper limit to its designed lifetime, and it is being designed to carry enough for ten years.[141]"

versus later in the same article...

The latter statement sounds more like 40 years of fuel!

Maybe the fuel is also used for some other purposes like initially entering the halo orbit or for attitude control, etc.?

For some background see

According to... James Webb Space Telescope Initial Mid-Course Correction Monte Carlo Implementation using Task Parallelism and Station Keeping Monte Carlo Simulation for the James Webb Space Telescope there will be a small propulsive station-keeping event every 21 days. Wikipedia says this will consume 2-4 m/s of delta-v per year from a budget of 150 m/s, so the lifetime could conceivably be much longer than 5-10 years, although I believe about [half of that (~67 m/s) will be used in mid-course corrections on it's way out to the Halo orbit...

It looks like JWST's trajectory from cis-lunar space to its halo orbit will generally follow what's called the "stable manifold" associated with that halo orbit about that Lagrange point. Even in the circular restricted three-body problem, JWST's orbit (like most of the big halos where spacecraft get put) is mathematically unstable. There are some stable ones, but they're smaller.

Life on the unstable manifold

If the spacecraft finds itself at a similar speed and direction but slightly closer to the Earth than it should be, it will then start spiraling out towards Earth with an exponentially increasing rate. It might begin only a few meters closer, but with a period of roughly six months and an exponential time constant measured in weeks, the thing inevitably unwinds towards Earth automatically. If it starts a few meters to the other side, it unwinds away from Earth.

These two spirals fall on what's called the unstable manifold which is a surface defined by all of the spirals produced if you start the instability at each point around the halo.

It turns out that if you start closer to Earth and you shoot your JWST along a similar spiral in the other direction, it can be on the stable manifold. This other tube-like surface coincides with the unstable manifold where they both intersect the halo orbit for which they are defined, but far from the halo the two manifolds go their different ways.

Like most spacecraft bound for halo orbits, it will leave cis-lunar space pretty much along a stable manifold, with their arrival (in both position and velocity vectors) in the general vicinity of their halo orbit a natural consequence. However, the solar system does not present a pure circular restricted three-body problem, so there will be trajectory corrections along the way.

As explained in the linked answers, JWST will sit slightly sunward (which is also earthward) of its orbit, but it will not drift towards the Sun due to its giant sunshield! It will exploit the solar photon pressure on its sunshield against the "forces" that would otherwise cause it to spiral sunward.

By itself, this is no advantage, but the interesting thing is that for a given telescope pointing direction, JWST has available a whole range of sunshield orientations; it can point at a field and still rotate around its optical axis. (Some astronomers may want a certain orientation around its axis; others may be more flexible) This means that over the course of several months there is flexibility in the direction that the sunshield reflects the sunlight and otherwise radiates its own thermal photons.

The sunshield now becomes a somewhat directable source of thrust with which to fine-tune its trajectory. This means that the amount of propulsive delta-v from its thrusters depends upon many factors, including solar activity and some details of the observing schedule.

From this answer to Rendezvouses in halo or lissajous orbits the Gomez et al. image is for an Earth-Moon scenario but the same idea applies to Sun-Earth:

...and here is what it looks like if you represent both manifolds coming from (or going towards) both directions: 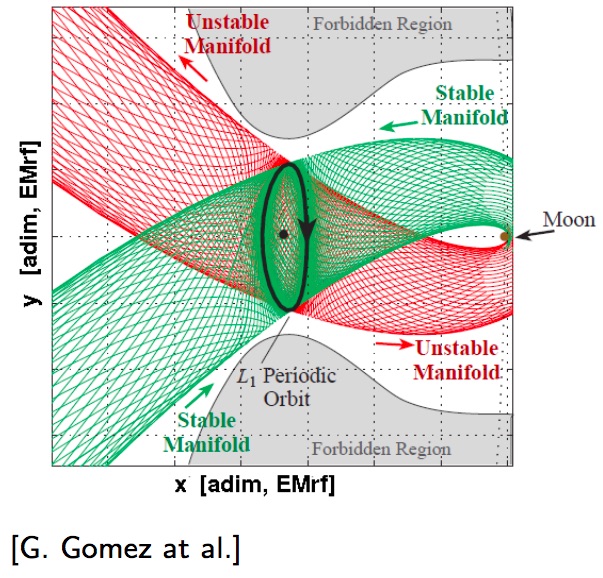 Here is the trajectory of the SOHO spacecraft from Earth to its halo orbit presumably along a stable manifold. The way it nicely spirals right up to the halo orbit in the right combination of velocity and position shows that it hopped on to the manifold at some point near LEO. The diagram is from Is this what station keeping maneuvers look like, or just glitches in data? (SOHO via Horizons)

This helps us to understand where these manifolds go (in our case, it would be the Sun-Earth system), and which ones might pass near cis-lunar space for injection following launch from Earth. It's from Lagrangian coherent structures in the planar elliptic restricted three-body problem (from the original)

Projection of the stable (green) and unstable (red) manifold tubes in the CR3BP onto position space. Image borrowed from Gómez et al. (2001) 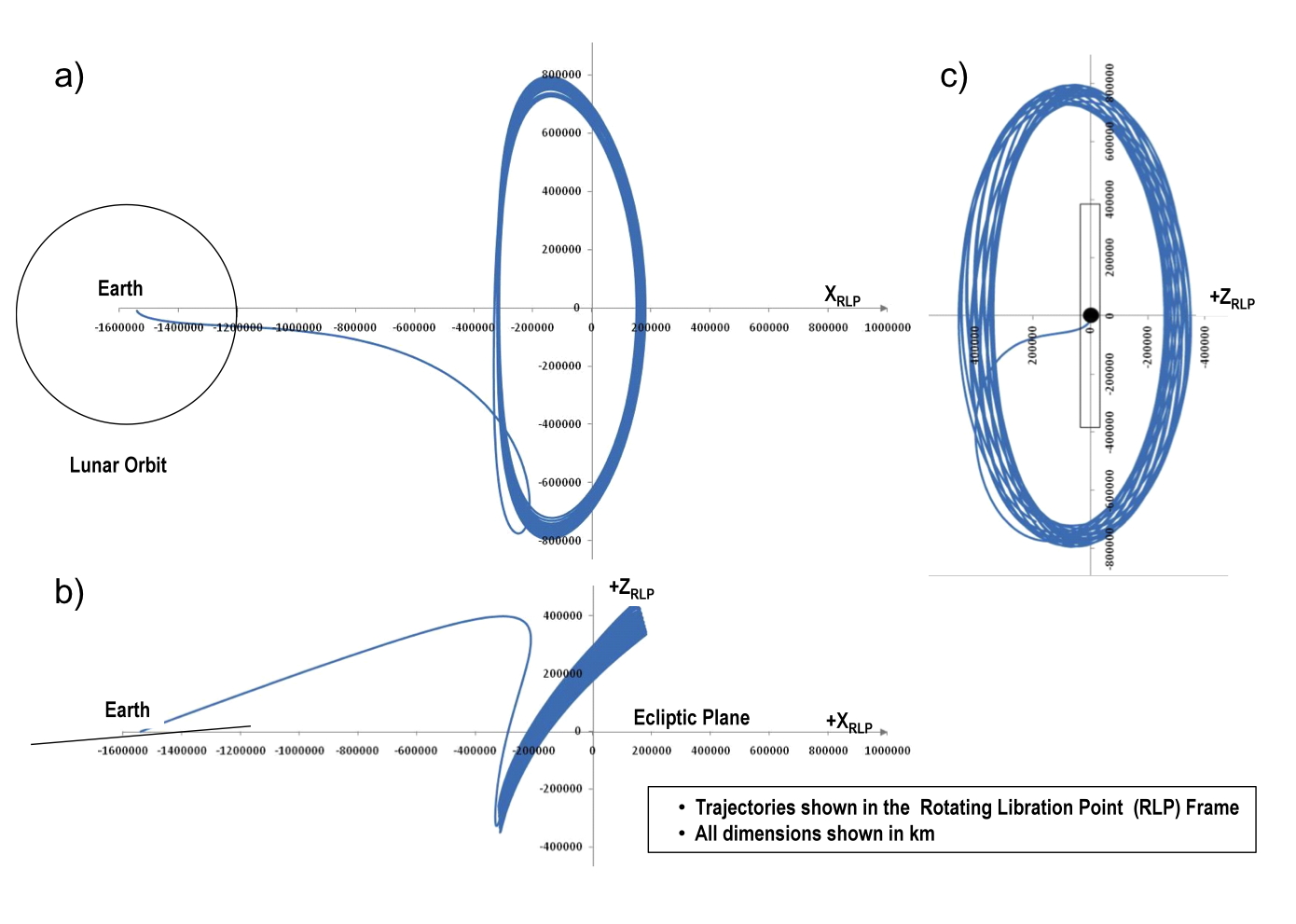 Such a large change of direction would require a lot of delta-v.

The paper found by Roger Wood shows some details: 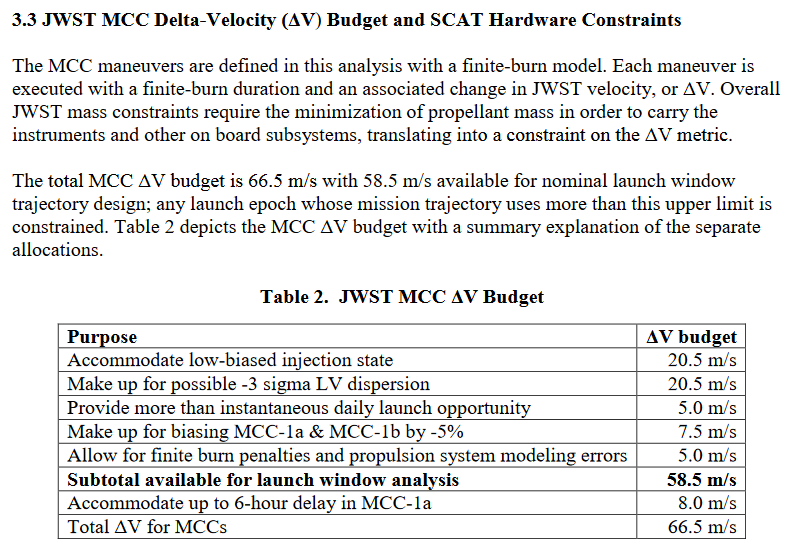 Not the answer you're looking for? Browse other questions tagged fuel station-keeping halo-orbit james-webb-telescope or ask your own question.

15
Could JWST stay at L2 "forever"?
17
Is this what station keeping maneuvers look like, or just glitches in data? (SOHO via Horizons)
17
Are some Halo Orbits actually Stable? (stable orbits about unstable Lagrange points)
17
What happens to JWST after it runs out of propellant?
6
What is the required burn to keep a satellite at a Lagrangian point?
9
How would you identify when an object in a Lissajous orbit needs station keeping?
8
The design of the halo orbit of the James Webb Space Telescope
3
Rendezvouses in halo or lissajous orbits