RINEX (Receiver INdependent EXchange format) is a set of file formats to distribute satellite navigation systems data, including GNSS. One of these standards, navigation files, provide positional information about satellites.

The standard differs for different satellite navigation systems, but can be broadly classified into two types: those providing state vectors as orbital elements, and those providing state vectors as Cartesian coordinates (in an ECEF frame). As representatives of each class, RINEX navigation files for GPS are of the orbital-element type, while those for GLONASS are of the Cartesian coordinates type.

I am currently trying to use the state vectors provided in such RINEX navigation files as the starting point for propagation with a high-precision numerical propagator. However, in order to perform such operation, I believe it is key to know exactly to what time instant the provided state vectors refer.

Multiple time parameters are provided in RINEX navigation files, as described for example here, and in a more interactive manner here for GPS files and here for GLONASS files.

My question is, from the different time parameters provided, how can we obtain the time to which the state vectors correspond as accurately as possible?

I am leaving below a summary of what I have managed to work out so far, split into GPS and GLONASS sections.

The format is described in Tables A3 and A4 of the appendix of this document, with an example in Table A8 of the same appendix.

The first line of each message contains fields for the Epoch year, month, day, hour, minute and second. However, I am unsure about the following points regarding such Epoch fields:

The header contains a set of parameters labeled as Delta-UTC, which seemingly can be used to "compute time in UTC", named A0, A1, Reference Time and Week Number. The formula for conversion seems to be, according to section 5.4.1 of this document and section 8.2 of this document:

Regarding this, I am unsure about the following:

Finally, the 3rd field of the 6th line of messages is "GPS week number". I am inclined to thinking that this value might potentially be combined with the "Time of Ephemeris" field to obtain the epoch time for the reported ephemeris.

The format is described in Tables A10 and A11 of the appendix of this document, with an example in Table A12 of the same appendix.

The situation for GLONASS messages seems to be a bit different. The header (which is valid for all included messages in the file, which can and in fact usually seem to come from different satellites in the constellation) contains a set of parameters labeled as "CORR TO SYSTEM TIME". These are:

The $Tau_N$ and $Gamma_N$ parameters seem to be provided in the first line of each message, and my guess is they are again some form of clock bias and clock drift. However, the following are still unclear to me:

Edit: I thought it would be a nice idea to keep track here of the clarifications we find for the different questions.

Edit 2: I have left as another answer the procedure that I believe to be correct after clarifications provided by @NgPh

The first is any time (e.g. the time the message was transmitted) expressed in the time system maintained by a particular satellite (Space Vehicle). The second is the reference time for the clock correction, expressed in the same time system. The correction is needed so that any time announced by any satellite can be converted to a common GPS time system (also called GPST). Hence, Eq. 2 of the GPS reference spec (IS-GPS-200M, page 95 - that you mentioned in comments above) allows a receiver to correct the clock errors in a particular SV, from the navigation data broadcast by this SV, to get to the common time reference. These broadcast data are computed by the GPS Operation Center and regularly updated by it. This explanation from the GPS specification (IS-GPS-200M, Section 20.3.3.3.3.1) is clearer: 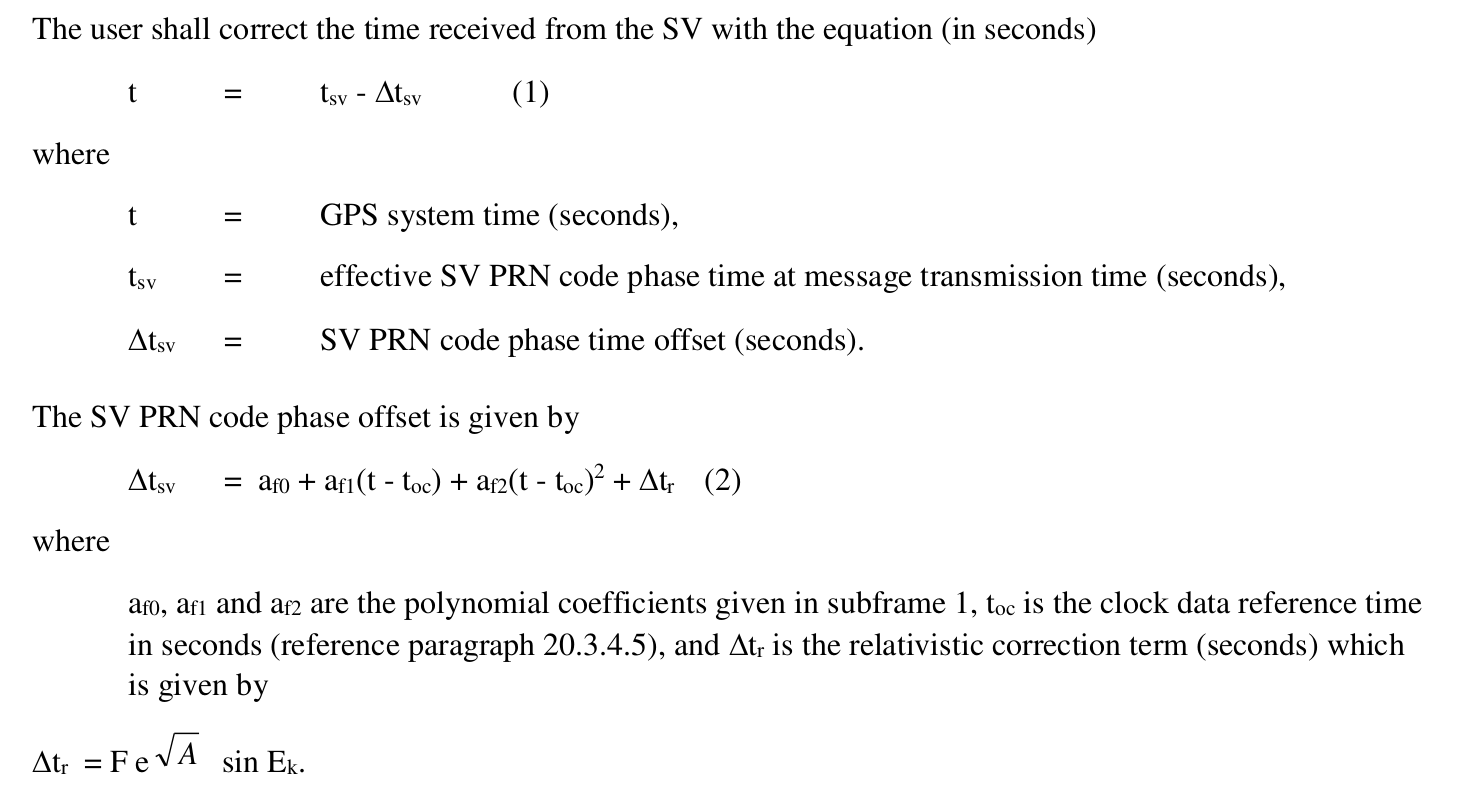 Could the formula be expanded to include a quadratic term, something like $af_2 * (T_{SV} - T_{OC})^2$ , where $af_2$ would be the clock drift rate, also included in the first line of each message?

It could, as the field exists in the specifications. It is possible that this quadratic term is rarely used. Its non-zero value would mean that the on-board clock is drifting in frequency as well. Probably, they would switch to the spare atomic clock (unless both clocks suffer this).

Would relativistic corrections also be required to correctly obtain an UTC time?

I think the relativistic correction is application-dependent. For the purpose of localization, I believe you do not need UTC, just to synchronize 4 measured deltas of time to the same common reference of time (GPST).

The formula in the RINEX document, Section 5.4.1 (reproduced down here) is a bit puzzling.

It looks like it's an incomplete formula, with omitted terms replaced by "..." (suspension points that you didn't reproduce in your question). The GPS specification, Section 20.3.3.5.2.4 is much clearer. It reads:

I haven't read the GLONASS specifications but I think all GNSS clock corrections (Galileo, Beidou,...) follow the same approach, with only differences in notations of terms. A good exercise would be to read the same sections in their specifications (I am too lazy for that!).

Thanks to @NgPh's very insightful explanation, I think I could finally figure out how to correctly perform clock corrections to UTC for GPS and GLONASS RINEX navigation files. I have now completed my own implementation, and I thought it might be a good idea to leave a summary of the process as I believe it to be correct here. Note that the described processes here refer to how to correct the time of ephemeris (to put it in plain words, the time at which the provided state vector of the satellite is valid).

The situation seems easier for GLONASS files, although there is still a couple of things that I am not 100% sure. It should be noted to GLONASS time is bound to UTC time, and there will be only a small offset at any given time (usually in the range of a few hundreds nanoseconds, and in any case always below 1 ms as stated in page 15 of the GLONASS specifications). Additionally, RINEX GLONASS navigation files provide ephemerides directly in Cartesian coordinates in ECEF frame. I believe the correct procedure for obtaining the most accurate UTC time is:

Not the answer you're looking for? Browse other questions tagged gps gnss rinex or ask your own question.