I am looking at the possibility of future space habitats being powered by Thorium. Main question is where to get Thorium? Could there be a metallic asteroid (like 16 Psyche) that contains Thorium and we could capture it? Unfortunately I am not aware of any known asteroid that is rich in Thorium.

Alternatively, I came to know that meteorite SAU 169 contains a very high concentration of Thorium AND SAU 169 is a lunar meteorite that was blasted off from the moon from a the Lalande Crater .

Hence the Lalande Crater on the moon could be a source of Thorium. Would this assumption be correct? Or am I being too optimistic?

The "very high" thorium concentration of SaU 169 is around 30 parts per million for the highest measurements (see table on page 6). That's only high in comparison to the bulk abundance of thorium in Earth's crust: thorium is typically extracted from monazite sands containing a couple percent to a couple tens of percent of thorium oxide.

Monazite sands themselves were weathered out of other rocks and concentrated by the action of flowing water sorting grains by density and producing placer deposits. You are not likely to find similar concentrated ores on the moon or asteroids, though you may find them on Mars. Without them, extracting the thorium will be a very complex and energy-intensive process, likely as a byproduct of the extraction of other materials.

Partial answer by a non-expert.

The thorium as 232Th itself will be a very, very small part of the mass of a safe, reliable thorium reactor. I assume that it will pelletized and pretty safe if you don't ingest/inhale it. It's not actually radioactive, and used to be given to people to eat as a contrast agent for X-rays, so it really could be sent from Earth as a few kg carry-on along with one of the passengers (again, as long as they don't eat it).

Thorium 232 is fertile, meaning in the reactor you'll convert it to Uranium 233 with a thermal neutron source, and whatever that is is a different challenge and you might not want that in a carry-on bit of luggage.

so back to square one with the danger of launching. Mining in space is a way around that. You could launch everything else as non-radioactive payload but find your fissile neutron source (required to use thorium) in space somewhere. 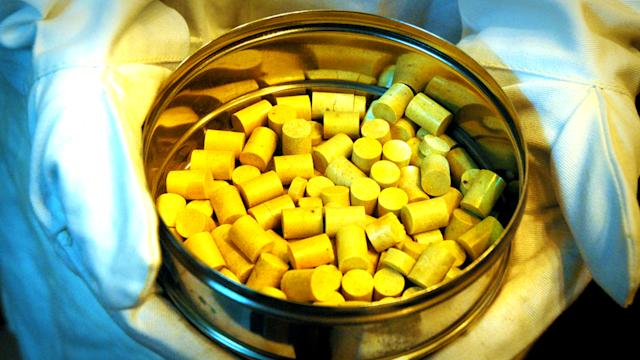 Now you've still got to build a big nuclear reactor, and it's going to have a lot of exotic high temperature materials in it that are difficult to process as raw materials and then manufacture in to components.

"But I asked where!"

Thorium 232 is stable and primordial, and you'll likely find it mixed with Uranium.

The 2010 Geophysical Research Letter Uranium on the Moon: Global distribution and U/Th ratio presents an analysis of gamma-ray maps of the Moon from JAXA's Kaguya gamma ray spectrometer. They don't measure Thorium directly, but instead they pick up a 2614.5 keV line from the beta decay of Thalium 208 in the decay chain of Thorium 232.

Yes I said that it is stable, but it alpha-decays with a half-life longer than the age of the universe.

They detected Uranium 238 from a 1764.5 keV gamma ray line emitted as a result of β decay of Bismuth 214 which is in its decay chain. 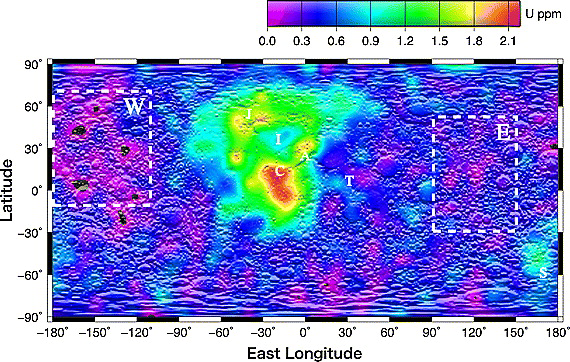 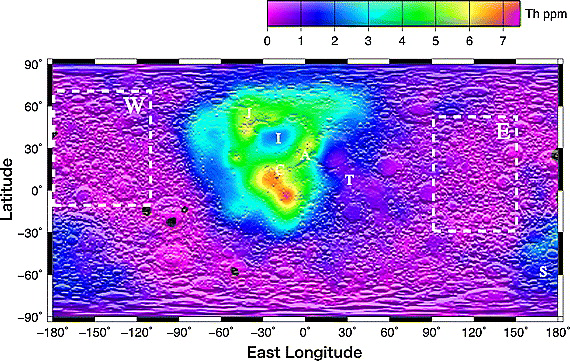 Figure 4. Distribution map of Th on the lunar surface measured by Kaguya GRS. The abundances were determined by peak-fitting analysis of 232Th 2614.5 keV peaks. Labels on the map are the same as those in Figure 3 (see also text).

What your reactor might look like, from Use of Thorium in the Generation IV Molten Salt Reactors and Perspectives for Brazil 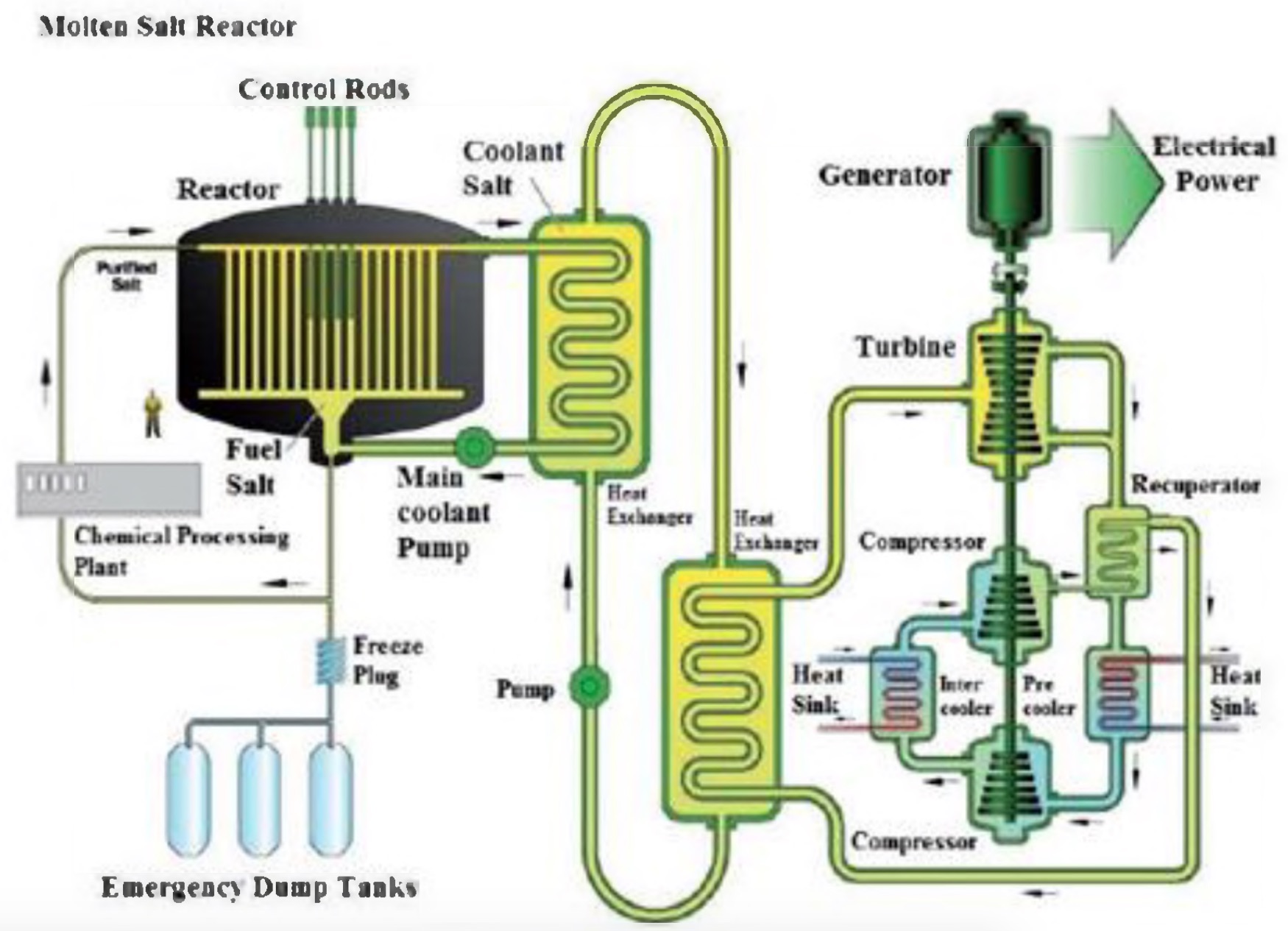 But you might instead see if a variant of the Kilopower reactor built for space applications can be rigged up to work with thorium 232 somehow.

Figure 3. Nuclear reactions involved in the transmutation of 232Th to 233U

update: Here's a map of Thorium in higher resolution from the Lunar Prospector spacecraft that orbited a few years later. Looks delicious! 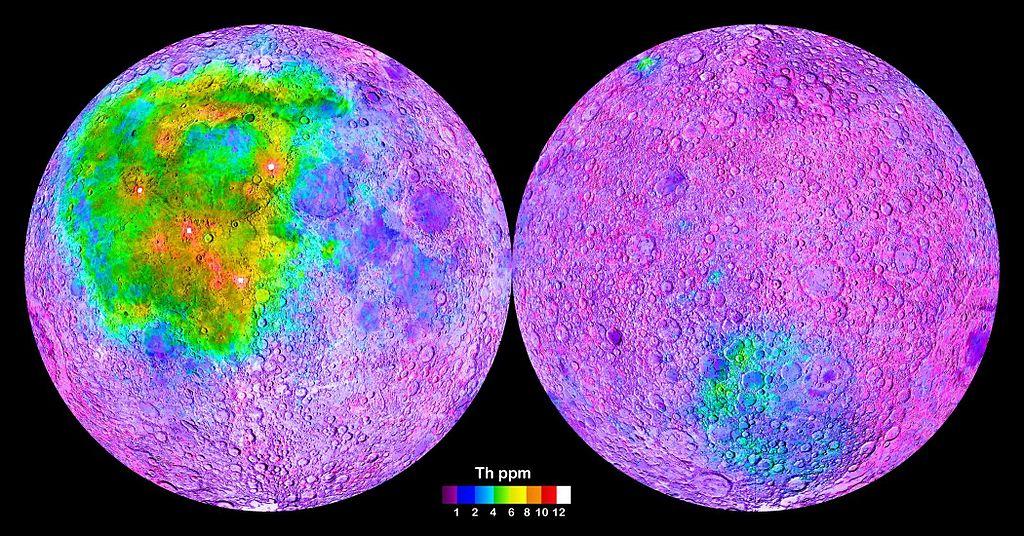 Map of the Moon (left: nearside; right: farside), generated from gamma-spectrometric data collected by the Lunar Prospector vessel. The map shows the global distribution of the element Thorium in surface rocks, with high Thorium concentrations indicating the occurence of the so-called KREEP rocks, which have high contents in Potassium, Rare Earth Elements and Phosphorus. The heterogeneous distribution of KREEP rocks at the moon’s surface implies fundamentally different geological histories of the individual lunar regions (terranes). For further information see Jolliff et al. (2000)1

The paper is long and excellent and goes into great detail, it may be particularly helpful for someone wanting to figure out where to start looking first to find Thorium and Uranium necessary to power their reactor after a heck of a lot of refinement.

Given the data in the other answers it would be easier to source thorium from Earth and send it into space.

The current resources of thorium on Earth are large,

The estimated grade of thorium resources in Australia is 7 percent.

The grades for lunar deposits, as per the answer by @uhoh, are given in parts per million, as is the grade of the SAU 169 meteorite. This is 10,000 times more dilute than what can be obtained from Earth.

Extracting thorium from such deposits would be possible, but it would be very expensive. Getting it from Earth would be much easier and cheaper.

Both Uranium and Thorium deposits on Earth are concentrated AFTER the emergence of the oxygen-producing photosyntesis. In general, it is the free oxygen in the water that makes these elements soluble, e.g. selectively transportable.

On a celestial body with no liquid water, water cycle and a free oxygen source, one cannot expect these elements to be concentrated to mineable amounts. Well, this is more or less true for almost any chemical element, except the most abundant ones.

What's more, most of the heavy elements (and U and Th are among the heaviest) are concentrated in the core of any body large enough to be molten at some point in the past (our Moon qualifies pretty much). You will have do dig a lot.

The only somewhat practical source of heavy elements are "iron" asteroids. Looks like they are the above mentioned cores, exposed by collisions in the past. There, you will get easilly-accessible metals and (probably) Thorium as a by-product of metal purification.

While I cannot improve on the previous answers in respect to the abundance of thorium. I would like to add that I find it doubtful that any inner solar system space habitat (perhaps baring the moon or L2 LaGrange points) would use any type of nuclear reactor. This is because solar panels are simply a far better source of power for these applications; they are far lower maintenance, have fewer issues with heat and don't have to deal with the transportation of fuel or disposal of waste.

Additionally, while space travel is going to necessitate the adoption of some form of nuclear propulsion in the long term, I suspect that a nuclear powered space station in orbit of earth (especially LEO) would be a tough sell politically.

Not the answer you're looking for? Browse other questions tagged asteroid thorium or ask your own question.

7
If there are Earth size bodies drifting in space could we identify them?
9
Would gold in space tend to collect in pockets like it does on Earth?
11
Does any space program / government have an official stance on a procedure for handling collision-trajectory comets?
11
What is the possibility of Voyager 1/2 colliding with matter (Asteroids or planetoids) present in space?
11
Would a 'space elevator'/sling on a rotating asteroid work?
9
If Oumuamua was alien space-junk, what would it look like, and would we be able tell?
2
Can small asteroids in the asteroid belt be detected on the fly and how much of a threat do they represent for a human manned space mission there?
18
Why do many comets & asteroids keep moving through the solar system, but space ships need fuel to do so?