For any state vector of a satellite at an arbitrary time T1, is there another state vector at a given time T2 that will result in the same orbit?

I recently found the question In a 3D space defined by semimajor axis, eccentricity and inclination, what would be the shape of the space where SDP4 works better than SGP4? and have become interested in trying to systematically explore the idea. However, given that, as explained in @uhoh's question, it would probably be at least a 6-dimensional problem, I was wondering if time (epoch) dimension could be ignored.

Is this indeed the case? Does it depend on how similar the two resulting trajectories would need to be in order to be considered "the same orbit"?

Intuitively, I'm inclined to think that it might also depend on the applied propagator. For example, if using a high-precision numerical propagator that considers the forces exerted by all other planets in the solar system, it would be almost impossible to find the same situation at two different time points.

Partial answer because this is a hard question and because clarifying some of the terms may require more than the exchange of a few comments in this particular case. Kudos for taking on a challenge!

What "same orbit" might mean is hard to pin down

The term "same orbit" is really hard to pin down, different people use it for different levels of "sameness". 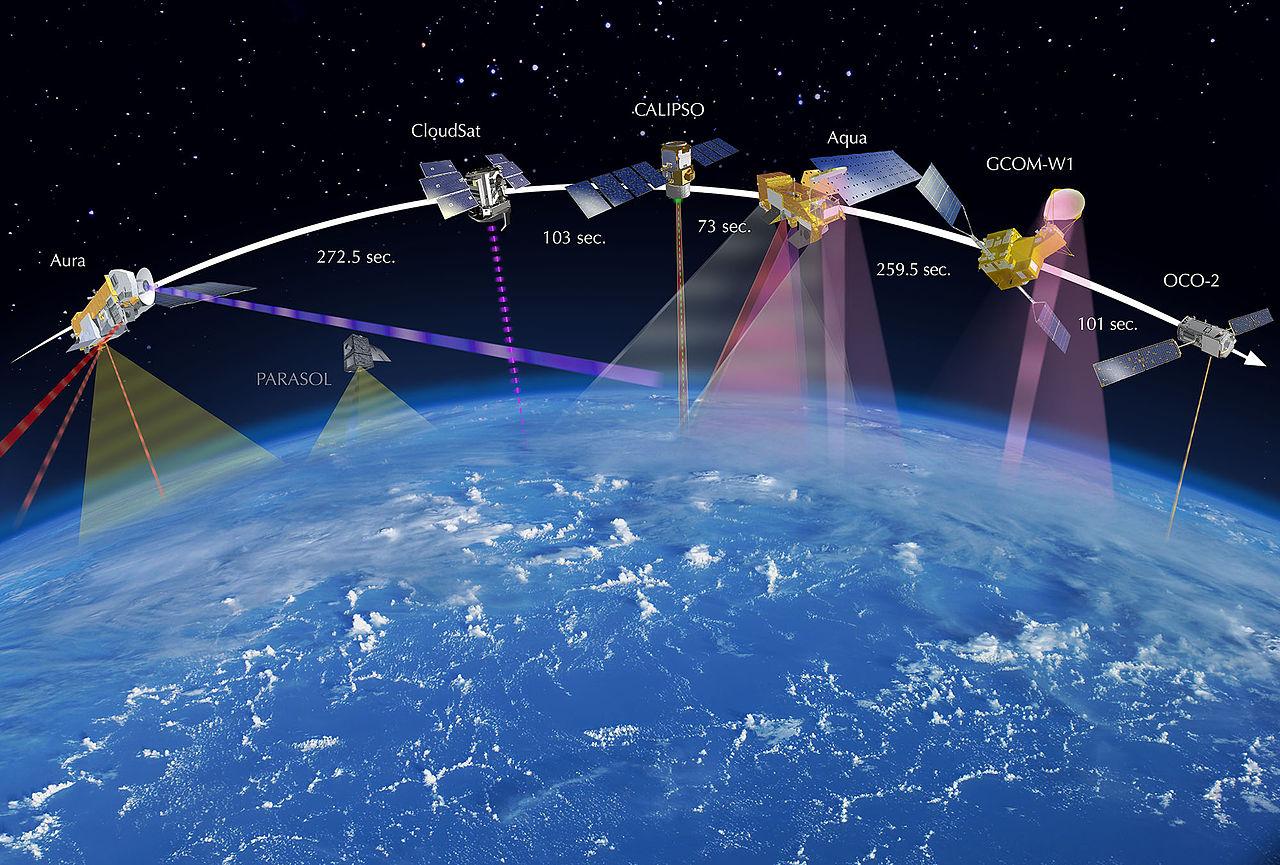 These satellites are basically in the "same orbit" in that they will remain fairly close to each other over weeks or longer without (much) station keeping. As the Earth turns beneath them each samples a slightly different part of Earths lumpy gravitational field, but for the most part their travel can be analogous to that of cars in a train, where one goes, so will the others behind it.

Satellite constellations like Planet's Doves, various GNSS systems and all the space-based messaging and internet systems stuff multiple satellites into each of several orbits, sometimes a dozen or more spread out around a full 360°. That's spread out over about 90 minutes, during which the Earth turns by about 22.5° underneath.

We can say satellites share the same orbital plane, but...

We can say they share the same orbital plane, and if someone said they're in the "same orbit" nobody would object. But due to the rotating Earth's lumpy gravity, their orbits won't be "exactly" in the same plane or have "exactly" the same shape or altitudes. Referenced to the center of mass of the Earth in a non-rotating frame, the orbits will differ by several kilometers up to 10 or more km in some cases.

"Same orbit"? It depends on the context of the conversation.

If your time frames T1 vs T2 are days apart or longer, then you have to keep track of where the Sun and Moon are, as their effect is important over long periods of time.

And also remember that inclined orbits slowly precess around Earth. For example the ISS precesses all the way around every 55 or 60 days or so.

About the linked question

Now about the linked question In a 3D space defined by semimajor axis, eccentricity and inclination, what would be the shape of the space where SDP4 works better than SGP4? The difference between "coke classic" SGP41 and SDP4 is that for high orbits SDP4 tries to include the long term effects of the tidal perturbations of the Sun and Moon's gravity on the orbit. It doesn't know exactly where they are at any given moment, it just tries to evolve the orbital elements gradually in a way that these effects might do it.

That said, how can we proceed to discuss what "same orbit" means or doesn't mean in this context?

I think this (and other) answer(s) can evolve as we try to pin this down.

1These days "SGP4" refers to packages that include SDP4 and automatically switch to that propagator when the period of the orbit is longer than 225 minutes.

I feel that I understand what you are trying to solve but there are many « loose ends » in your statement of problem that it is difficult to be affirmative. So, this is not really an answer, but rather a collection of observed « loose ends » and some discussions on how to get rid of them.

It is not clear whether, for you, they are synonyms. Take this quote from your question

This can be interpreted that orbit is a whole, while « trajectory propagated for 1 period » is just a part of that orbit.

Alternatively (and I believe this the right approach), we can say that the term « orbit » conveys the notion of something moving (hence, having a trajectory), but remaining in the vicinity of something else. Therefore, an orbit is a trajectory, but not all trajectories are orbits. I think, for example, we can’t talk about the "Voyagers’ orbits", at least not any more (I am eager to know if somebody can make a rejoinder).

An object has a closed trajectory when it returns to the same positions after some time. Do orbits need to be closed trajectories ? Real life tells us there is no such « closed orbits », or at least, they are extremely rare. If the orbital plane changes with time (and it has to because of Earth oblateness, among other things), it is difficult to have systematic closure.

The same quote above from your question seems to imply that a state vector (position, velocity) at a given epoch determines a closed trajectory in some judicious reference, so that you can define a period as the minimum time needed for an object to come back to its initial position. Hence, the rest of the trajectory is just a repeat of this part, ad-infinitum.

While this notion is correct in a 2-body situation of orbital-mechanic theory, in a judiciously chosen reference frame, it is easy to observe that it breaks down when there are other forces and also when the reference frame is changed.

You may get away with this difficulty by restating that : SV1 at epoch T1 defines a Keplerian orbit, with period P, in an ECI reference. The actual trajectory between T1 and T1+P and the Keplerian orbit are the objects of interest (but distinct).

Consider an object orbiting a celestial body and its actual trajectory. If we are given exactly a series of state-vectors SV1,SV2,SV3, … at sampling instant T1,T2=T1+P,T3=T2+P, … can we use the Keplerian orbits, which are determined uniquely by SV1, SV2, SV3, … to approximate the actual trajectory, to within a certain tolerance and within a certain finite time duration ? P needs not to be exactly the Kepler period and can be used to control the approximation errors.

Not the answer you're looking for? Browse other questions tagged orbital-mechanics propagation or ask your own question.

6
Differences between SGP8 and the standard SGP4? Is it ever used in practice?
5
In a 3D space defined by semimajor axis, eccentricity and inclination, what would be the shape of the space where SDP4 works better than SGP4?
5
How do SDP4's "Deep space" corrections to SGP4 account for the Sun's and Moon's gravity?
6
SGP 4 for Geostationary Satellite
7
Textbook or scholarly discussion of equations used by the SDP4 part of SGP4 TLE propagators beyond Space Track Report #1?
2
ISS nodal precession
1
Why can't custom-made TLEs for the DSCOVR launch booster in orbit around Earth work with SDP4?

8
How far in the future can SGP4 make accurate predictions?
9
Is SGP4 propagation necessarily more accurate near the epoch chosen for TLE generation?
0
How to find instantaneous positions of a central body of specified mass that results in an osculating orbit?
1
Point Ahead Angle Calculation between LEO-GEO Satellite (ISL Scenario)
7
Differences between numerical propagators