Has anyone explored using sound as a heat shield?

I edited original post to better reflect question. I was looking around to see if anyone had explored the idea of using (Ultrasonic or Hypersonic)sound to deflect heat from a ship. Specifically sound that is directed like a laser at a point about 4 meters ahead of the ship on re-entry. This could maybe create a plasma like shield that would create a cooler boundary layer between the ships body and the heat of re-entry.

TL;DR: No, but sortof yes

It's hard to prove a negative, but as PcMan's comment observes, this isn't worth pursuing since it falls apart on physical first principles.

The first, and obvious, problem is that "sound" is a compression wave. Gas molecules bump into other molecules, causing the wave to propagate. The informal "power" or "loudness" is how hard they do that. The wave propagates at a particular rate (the "speed of sound"), which varies with temperature/pressure/etc. but is quantifiable. In particular, if the air molecules are moving, in bulk, faster than this value, then the bulk motion of the air will carry the whole sound wave backward faster than the wave makes forward progress within the air itself.

The second problem is that sound waves don't actually move / deflect air beyond the extent of the vibration itself. This makes it useless for deflecting incoming hot air, per-se, for example.

In a twisted sort of way, a sound shield is kindof what actually already happens. Here are shadowgraphs showing testing of re-entry vehicle shapes: 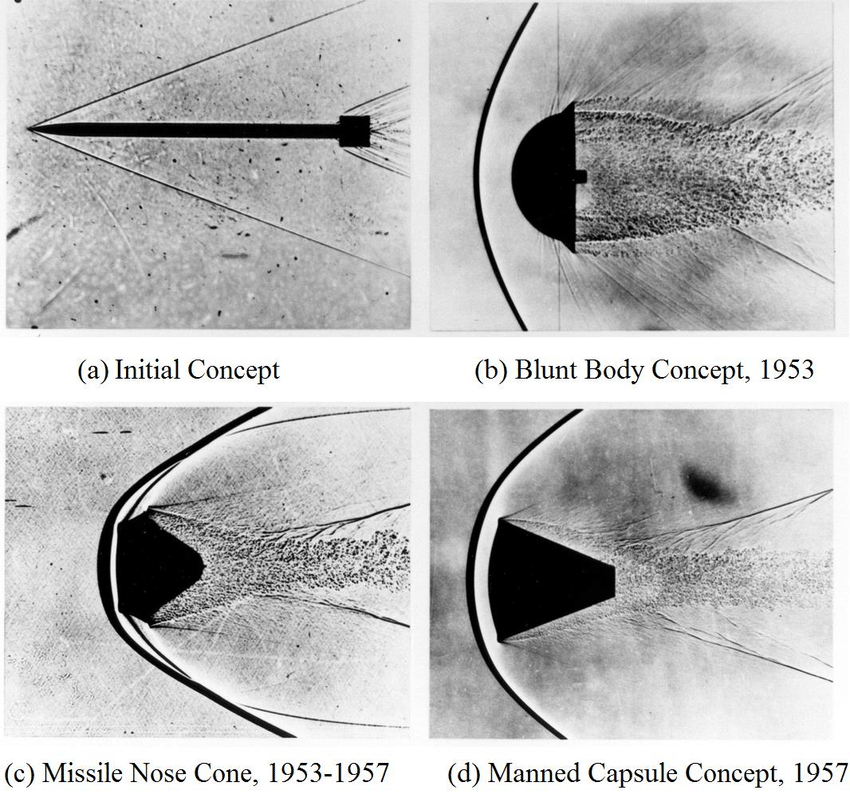 See the black lines? Those are shock fronts. To the left, the air is supersonic, and to the right it is subsonic.

To the left of the shock front, the air is approaching the spacecraft at supersonic speeds, and therefore "doesn't know" about the spacecraft yet, and is cold. However, when it hits the shock front, it is compressed. This concentrates the air's thermal energy within a smaller space (which is to say, it becomes a higher temperature).

With a blunt surface, there is a space between the shock front and the vehicle. The way this happens is that the air "piles up" in front because it can't get out of the way.

The heat flux that compressed air creates is related to the amount of air that gets compressed, so by letting some of the air pile up on the front of the spacecraft—and mostly stay there—less new air, and therefore less heat, is brought in to touch the spacecraft's hull. Therefore, the spacecraft's hull need withstand much less thermal power. Meanwhile, the shock front is very very hot because lots of supersonic air is being compressed and bringing lots of energy, but with a blunt design the subsonic air cushion makes this happen farther away from the hull.

So . . . in some sense, (the speed of) sound does play a role in protecting spacecraft during re-entry.

Not the answer you're looking for? Browse other questions tagged design-alternative heat-shield or ask your own question.