How do you test-fire vacuum engines in a vacuum chamber? Why doesn't it fill up almost instantly from the exhaust and spray (deluge) water?

How are vacuum optimized engines tested without disintegrating them? is an excellent question as it's attracted quite a number of informative and diverse answers.

@Uwe's answer informs us that there exist at least one or two low-pressure test chambers where engines can be fired for tens of seconds and the exhaust cleverly managed/diverted to maintain a pressure below 50 Torr for tens of seconds which is pretty amazing!

A test facility modification to enable small scale altitude propulsion testing at the NASA Glenn Research Center’s In-Space Propulsion (ISP) Facility was verified with a hot fire test campaign. As the facility’s primary steam supply system undergoes refurbishment, the alternate facility configuration, known as the “vacuum accumulator” mode, would enable rocket engine testing up to 10,000 lbf thrust. The NASA Johnson Space Center developed the vehicle for the verification test campaign: the Integrated Cryogenic Propulsion Test Article (ICPTA). Constructed primarily from assets of the former Morpheus Project, the ICPTA provided an integrated liquid oxygen (LOX) / liquid methane (LCH4) propulsion system including a 2,800 lbf thrust main engine. The ISP Facility’s vacuum accumulator configuration leveraged the large test volume of the facility and a diffuser insert to maintain altitude conditions. During hot fire, the ICPTA main engine “started” the diffuser insert constructed for the test campaign. As a result, the test chamber upstream of the diffuser insert remained at altitude conditions throughout the hot fire. Upon engine shut down, a backflow deflector mitigated blow back into the test chamber by restricting the mass flow and redirecting it away from the test article. The test campaign successfully characterized the performance of the vacuum accumulator configuration. In addition, it provided an opportunity to collect data for an integrated LOX / LCH4 propulsion system in an altitude and thermal vacuum environment.

I see “vacuum accumulator”, "diffuser" and "backflow deflector" but after a read through I still don't understand how this actually works.

Question: How do you test-fire vacuum engines in a vacuum chamber? Why doesn't it fill up almost instantly from the exhaust and spray (deluge) water? 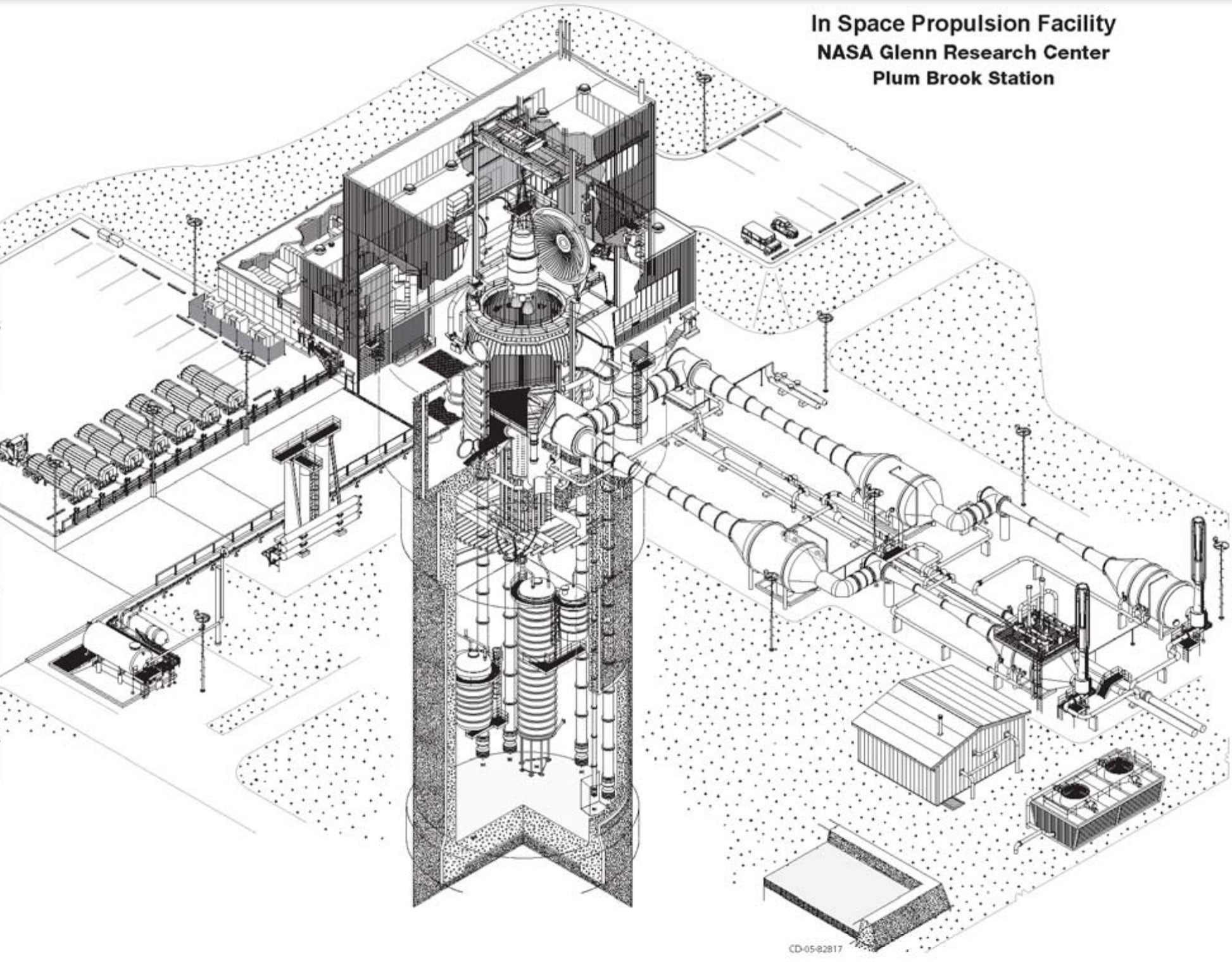 Figure 1. A cutaway view of the In-Space Propulsion Facility. In the center of the test chamber, the facility’s diffuser provides the interface between the test chamber and the spray chamber. The steam ejectors are located outside of the test building in the yard on the right. 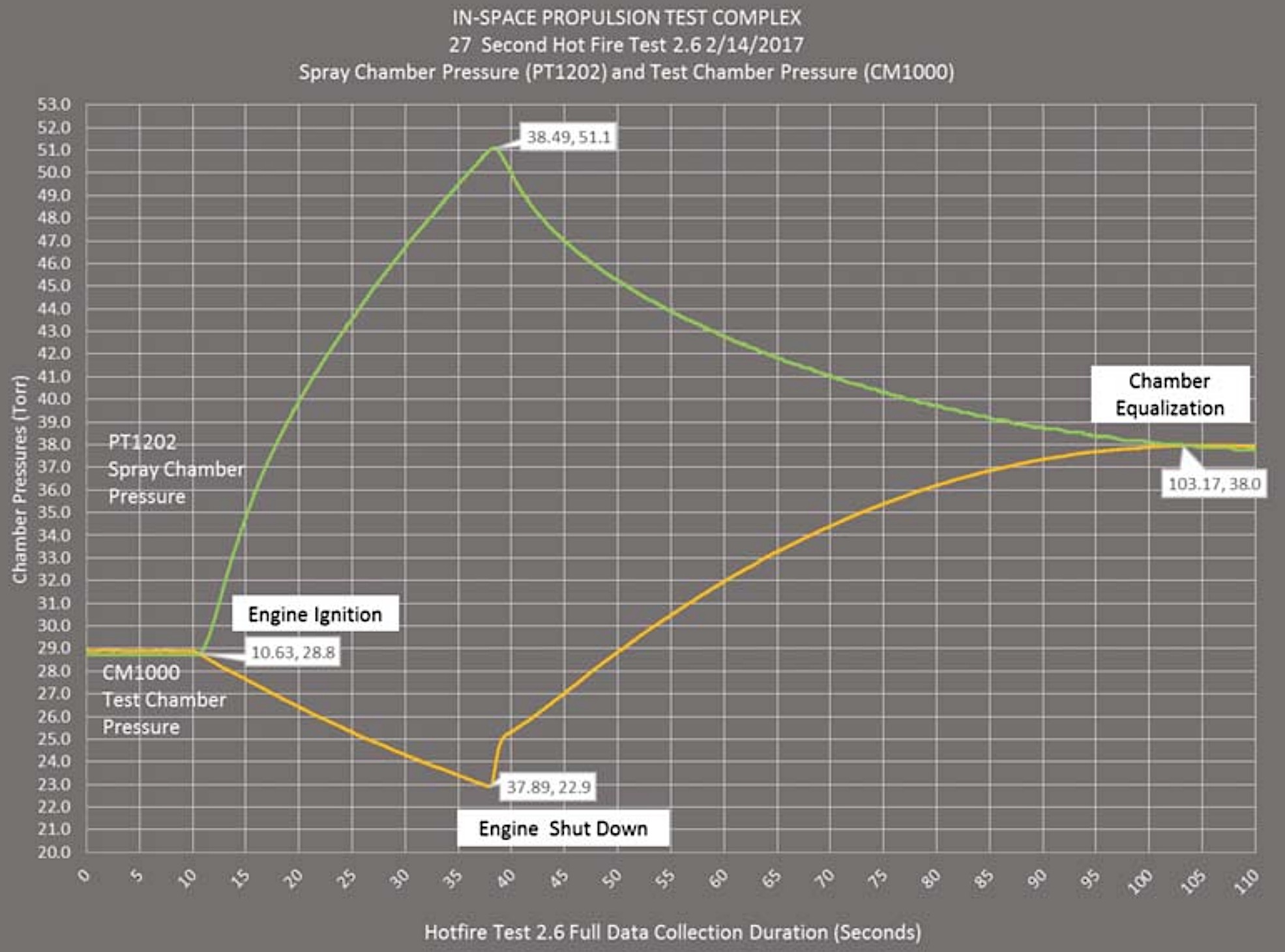 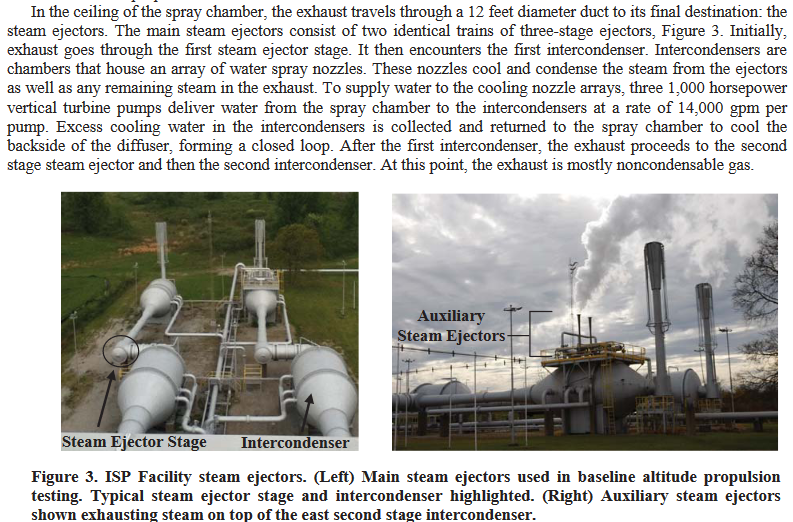 For a vacuum of about 1 kPa, a steam ejector with two or three stages will do. Using five stages, a vacuum pressure of 4 Pa is possible. But the upper stages should be much bigger than the lower stages, the volume flow rate increases eight- to tenfold for each step.

It is an application of the Bernoulli's principle and the Venturi effect, the vacuum ejector:

For an engine test stand you need very large steam ejectors to keep up with the engine. The hot steam is much colder than the engine exhaust and will absorb a lot of heat. Of course much more steam than the exhaust of the engine under test is needed.

A steam ejector is build without any moving parts. A large steam generator may hold enough hot water for an engine test for tens of seconds, but heating all that water before the test may take many hours.

Not the answer you're looking for? Browse other questions tagged engines testing vacuum or ask your own question.

7
How are vacuum optimized engines tested without disintegrating them?

33
Why do the exhaust flames from cryogenic stage engines appear to be separated from the nozzle?
7
Why doesn't this SpaceX rocket test fire use water sprays?
4
From what material and how are the Merlin engines and nozzles of it (sea level) manufactured?