Spin-stabilization of a NASA rover en route to Mars. What and why?

This NASA's site describes a launch sequence of a rover towards Mars, from which we can read:

Before the third stage's rocket is fired to get the spacecraft out of Earth orbit and on its way to Mars, it has to be "spun up". Small rockets are used to make the third stage spin about its long axis. Actually, the third stage will spin on a turntable attached to the second stage.

and then, before 3rd stage separation

Now, the third stage, with its solid rocket fuel exhausted, and with the spacecraft attached, are on their way to Mars. However, the spinning upper stage and the attached Mars Exploration Rover must now be despun so that the spacecraft can be separated and acquire its proper cruise orientation.

But on this NASA's animation explaining Perseverance's entry-descent-landing sequence, we also learn that the spacecraft has a spin stabilisation during its cruising journey. Before entering Mars atmosphere, it executes a de-spin by releasing 2 "balance masses" (on the video, about 90 seconds from separation of the cruise stage).

Can somebody give some enlightening explanations/links/calculations about the necessity of these "spin/de-spin" operations, the amount of energy spent, the rationale for the technologies chosen by NASA to spin and de-spin, the weights of the balance masses that were carried by Perseverance all along its journey from Earth?

You seem to have confused some of the events from your research so let's start by setting the record straight (elaborating on the useful insights from @Armadillo's answer):

Launched on an Atlas V 551 and did not require a third 'kick' stage. Before separation the launch vehicle imparted a spin* to the spacecraft which it later corrected, with thrusters, to a speed of 2 rpm (Mizukami, M. et al. "Mars Science Laboratory Cruise Propulsion Maneuvering Operations," 2013). Prior to entry, the linked animation states that "the spacecraft uses thrusters to stop its 2 RPM spin" i.e., it does not use the balance masses to de-spin. The next phase of the animation states, if viewed in full screen, the two balance masses are 70 kg each. Later in EDL, during the SUFR (straighten up and fly right) maneuver, 6 additional balance masses are ejected, massing 25 kg each.

*note that though it looks like the spacecraft begins to spin after separation, that is in reality the second stage de-spinning, like with MSL (Curiosity)

For spin stabilization & yo-yo de-spinning there are a few question & answers here that may help:

Calculating the weight of the balance masses:

M2020/MSL are unique missions where the location of the centre of gravity/mass (C.G.) of the aeroshell/entry vehicle changed multiple times during flight. It's easy to understand needing a C.G. located on the axis of revolution of the radially symmetric aeroshell/entry vehicle while spinning during cruise from Earth to Mars; everything is mounted, and therefore should ideally spin, axially.

From Schoenenberger, M. et al. "Assessment of the Reconstructed Aerodynamics of the Mars Science Laboratory Entry Vehicle," 2013 (NTRS ID: 20130010088), where the axis of revolution is the vertical dashed line cutting through the middle: 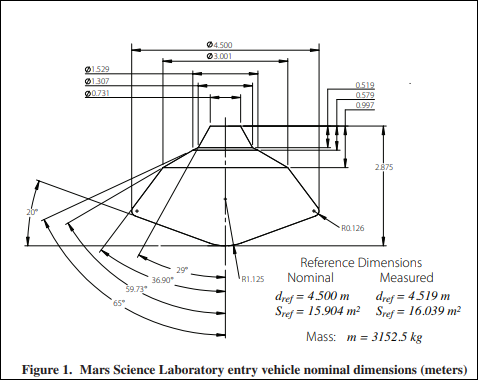 During entry, the aeroshell/entry vehicle generates lift by flying at an angle of attack. This angle of attack is generated by offsetting the C.G. from the axis of revolution, the x-axis in this figure (again from Schoenenberger, M. et al.): 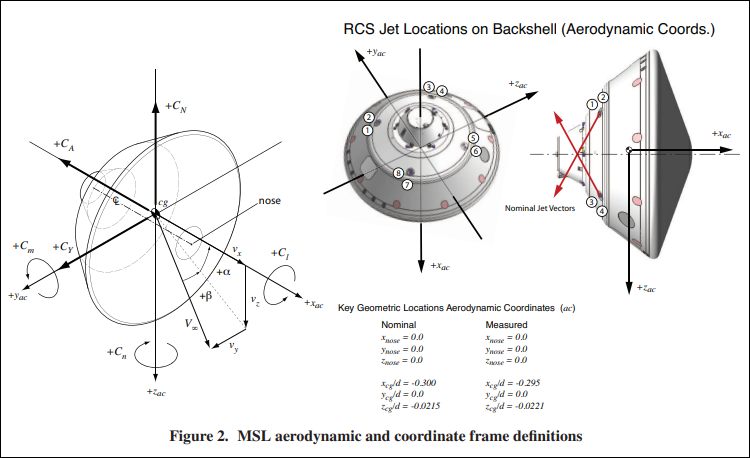 (you can also see the greenish/brownish regions where the balance masses are ejected from in the image above; 2 in the +z direction, 6 in the -z direction) 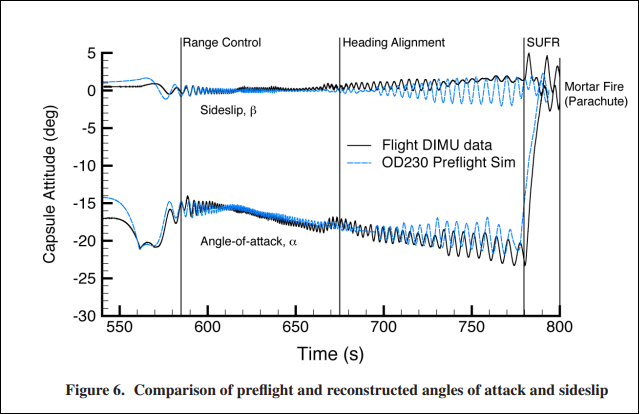 Using the design parameters shown, it is easy to determine a good estimate of the required mass for balance during cruise by performing a moment arm balance:

where $2.35$ meters is an estimated z-axis location of the cruise balance masses. This is very close to the total 140 kg (2 x 70 kg) actually used.

Also shown in 'Figure 6' is the SUFR (straighten up and fly right) maneuver which returns the vehicle back to a zero angle of attack attitude (ideal for parachute deployment) by returning the C.G. back to the aeroshell's/entry vehicle's axis of revolution. We can use the same method to calculate the required mass for this maneuver:

During the outbound cruise to Mars spinning the spacecraft at a constant low rate (~2 rpm) provides some added stability for the combined lander and cruise stage stack.

In the early phases of EDL, Perseverance used its reaction control system thrusters to bring this cruise spin rate to zero. Ballast masses were released at a slightly later time during EDL, but this is for a different purpose.

Both Perseverance and Curiosity used what's known as "Guided Entry" - when the ballast masses are released the center of gravity of the aeroshell is offset. This changes the lift-to-drag ratio of the entry vehicle and actually gives added control authority over the flight path to correct for errors. This is done to dramatically reduce the landing ellipse (i.e. increase landing accuracy).

You can read more about the EDL phases of Perseverance in this paper: https://trs.jpl.nasa.gov/handle/2014/50148

Not the answer you're looking for? Browse other questions tagged interplanetary perseverance spin-stabilisation or ask your own question.

9
Why does spinning help stabilisation?
12
How can a yo-yo de-spin maneuver reverse the rotation?
6
How does spin stabilization intuitively work?

3
What is the difference between dual-spin spacecraft and hybrid(attitude control) spacecraft?
9
Why does the Perseverance rover have such complicated shaped spokes in its wheels?
11
Why are spin-stabilized rockets stable?
6
How does spin stabilization intuitively work?
3
How did images taken by Perseverance's landing stage reach Earth despite its crash landing?
9
Why first 2 images of Perseverance (rover) are in black and white?
7
Did the rovers' cruise balance masses have a noticeable impact on Mars?
11
Why did NASA release Perseverance (rover) videos with a stop motion effect?
2
Perseverance's First Borehole looks like its particles of sand stuck together by something; composition of this material and source of adhesion?
2
Is Perseverance going to keep carrying those samples around or cache them? I don't really understand the plan