If you release a tool outside the ISS in space will it remain at the "same" place forever?

If an astronaut doing a repair outside the International Space Station (ISS) gently lets go of a tool into space, will it keep "flying" (orbiting) at the same spot relative to the ISS where it was left, forever? I'm not talking about throwing the tool in some direction, just gently letting go of it.

Since it was released from the same speed the ISS is circling Earth, and there is no air to cause friction and stop the tool, I wonder if it will remain at the very same position forever. If not forever, for how long, and why?

It will not. Once released, the object is in a very slightly different orbit from the space station.

If you put the object further out or further in from Earth than the space station it will be slightly further from, or slightly closer to Earth, while moving at the same velocity as the Space station, which will result in a slightly more, or less elliptical orbit, with a different semimajor axis and orbital period. As a result, it won't be able to remain stationary with respect to the space station

Any position you release the object will be a combination of the above cases.

As a result, unless the space station is in a perfect, circular orbit, there is no place on its orbit where you can release an object and have it forever remain at a constant distance from the space station, without orbital adjustments.

NO, even if both wrench and ISS are idealized point masses in the same circular orbit.

The mass of the ISS imposes a non-trivial gravitational acceleration on the wrench. If the wrench is dropped within EVA distance of the ISS, mutual gravitation will displace it on meter-scale distance within a few orbits. Surprise with such a small mass, but this is a 3body problem!

NO if the circular orbits are non-coplanpar since they would intersect.

NO, if coplanar eliptical orbits have the same period but different eccentricities. The pair would do a retrograde orbit around each other.

NO because of atmospheric drag. The ISS is in a slow spiral re-entry trajectory. The wrench, not so much due to its lower drag coefficient and higher sectional density.

The best you could do is place the wrench at the ISS center of mass (COM) which may be inside or outside the pressure hull. This would eliminate gravitational and tidal effects. Drag would still be an issue

A dated version of the COM location, for multiple conformations, is given in http://athena.ecs.csus.edu/~grandajj/ME296M/RevAB_Volume%20I%20Signed_updated.pdf. Too much information?

According to Scott Manly

If your tool has even the slightest relative movement to you, even just 1 mm/s, you can expect it to move away fairly quickly. 1 mm/s results in at least a 10 foot ellipse, also up to 50 feet per orbit drift. The figure below shows the orbit it will follow, relative to you, depending on the direction you send it. As there will likely be some "Posigrade"or retrograde component to it, it won't return directly to you.

It's an old picture I keep for reference because it's not simple to re-derive it. I'm sorry I don't know where it's from, probably screen shot from an old scanned NASA PDF. Google doesn't turn up any results. 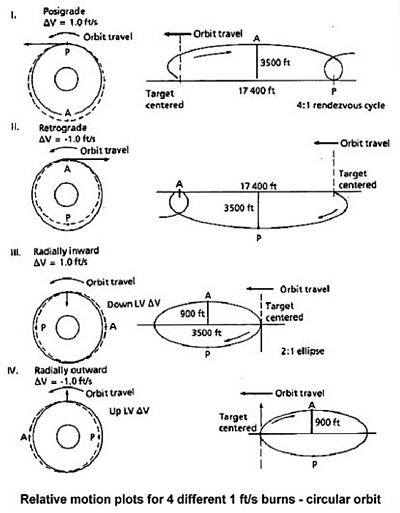 This is all for perfect orbital mechanics, then there's still air friction, radiation pressure, etc.

Not the answer you're looking for? Browse other questions tagged orbital-mechanics iss velocity in-space-repairs tools or ask your own question.

11
What kinds of things have been tossed out of the ISS?
7
What are the causes of these episodes of faster than average altitude loss by the ISS?

4
Why are low earth orbit satellites not visible from the same place all the time?
13
How do astronauts take pictures from outside the ISS?
12
If all people come home from the ISS for how long would it remain usable?
4
What is this object outside the ISS that looks like a loudspeaker?
11
If you throw a baseball from the space station, will it return to you in 90 minutes?
26
How hard do you have to throw something off the ISS to make it deorbit?
12
How was the Space Shuttle Orbiter used for ISS Reboost?
9
This ISS trash deployment looks more like 2 feet than 2 inches per second, was it too fast or are these articles incorrect?
3
What is the acceleration in an orbit decaying due to air resistance relative to one not decaying?