How to keep the phase angle with an Hohmann transfer?

I am studying the drag make up maneuver. In this maneuver, I need to go from point A to point B keeping the same phase angle as shown schematically in this picture 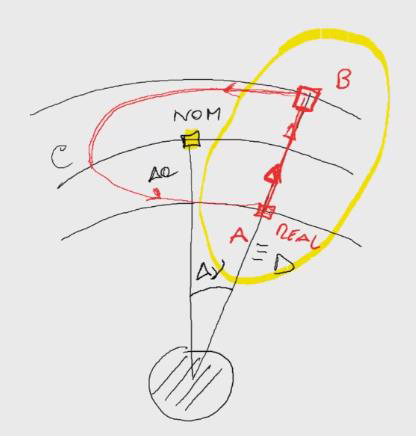 When I've approached this problem, I've thought about bi-elliptic transfers but my professor said that if we need to have a symmetric jump (from 𝑎−Δ𝑎 to 𝑎+Δ𝑎), while keeping the same phase, in ideal condition, also a Hohmann transfer would be the solution. I have made some math, but I've found that the only way to keep the phase with Hohmann is to keep the ratio between the perigee and the apogee equal to one...

Any solution will be appreciate. Thanks.

To see why a Hohmann transfer is applicable for a symmetric jump preserving phase angle, let's consider what the semi-major axis of the transfer ellipse is:

That is, the semi-major axis of the Hohmann transfer orbit is equal to the nominal orbit!

After the transfer half-orbit has been completed, the nominal orbit must also have completed half an orbit. With the same angle (180 degrees) covered in the same time, the phase angle is preserved.

Not the answer you're looking for? Browse other questions tagged orbital-mechanics orbital-maneuver hohmann-transfer rendezvous or ask your own question.