Using the times of injection and retrofire in this diagram: 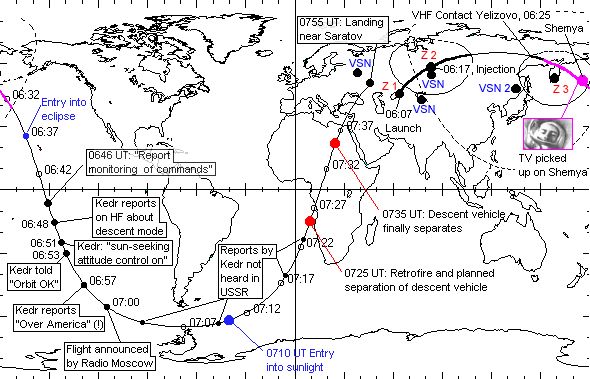 Ok, he didn't complete one full orbit. So what? He was in orbit every second of that 3/4ths of an orbit. So, yes, Yuri did indeed go orbital. He didn't need to go 360° to make that claim.

I will posit a definition that you are in orbit, even if only for a portion of an orbit, if your calculated orbital lifetime is at least one orbit. For typical ballistic coefficients, that would be about 150 km. Yuri's orbit was 315 km x 169 km, with a much longer lifetime than one orbit. I calculate about a 19-day lifetime for that orbit and the (relatively high) ballistic coefficient of a Vostok spacecraft pointed into the wind.

It certainly wasn't a sub-orbital flight, as were the flights of Alan Shepard and Gus Grissom which never got close to achieving the speeds required for orbit.

From Wikipedia's article on Vostok 1:

Path of Gagarin's complete orbit; the landing point is west of the takeoff point because of the eastward rotation of the Earth.

The flight was at least one orbit of the Earth (note the latitude of the landing is higher than the launch, see @DavidHammen's answer), and beyond that the mission involved firing retrorockets to leave orbit, so not only was it an orbit, the craft did attain orbital speed. Without retrorockets firing to reduce its orbital speed, it would complete many orbits around the Earth before its orbit would naturally decay due to atmospheric drag. The accomplishment of getting a human into orbit, round the Earth and back to the ground safely was there.

You are looking at the wrong parameter. The Earth rotated underneath the orbiting spacecraft during the 108 minute flight. A better parameter to look at is latitude. He launched to the northeast and landed 5.35 degrees north of the launch site. He passed the latitude of the launch site and then kept going for a bit. From launch to landing, his flight covered more than one orbit.

Per the rules for the first complete orbit at the time, Gagarin would have to land further east than his launch point, and land inside his launch vehicle.

He didn't. Part of his 'heroism' on the part of the USSR was that he agreed to go along with the lie.

After the lie was revealed, the Federation Aeronautique changed the rules.

Not the answer you're looking for? Browse other questions tagged crewed-spaceflight history sub-orbital orbital or ask your own question.

5
What is one full orbit?
8
How did Shepard's and Grissom's speeds compare with orbital velocity?

22
How did NASA Conclude that the General Theory of Relativity was not Needed for Earth-Moon Flight Path Computation?
19
Early high-inclination crewed flights
39
What are the most serious injuries that astronauts have suffered while in orbit?
3
Did TASS officially name the Baikonur Cosmodrome in 1950's instead of 1961?
84
What can the KSP game actually teach about spaceflight and orbital mechanics, and what are its limitations?
17
Why were the Sputniks launched to such high apogee?
35
How did the USSR track Gagarin's Vostok-1 orbital flight? Was tracking capability an issue in the choice of orbit?
15
What does the ATOLL programming language look like?
3
What's the highest latitude for a human spaceflight?