During orbital rendezvous, at what distance and approach velocity does the transition from orbital mechanics to “boating around” occur?

During the intercept (terminal) phase of orbital rendezvous, the intercepting spacecraft must use Proportional Navigation or Orbital Mechanics to develop an intercept course: all that counterintuative “back up to catch up” stuff. However, during braking and docking phase, the interceptor uses intuitive “boating around” maneuvering.

Question: During orbital rendezvous, at what distance and approach velocity does the transition from orbital mechanics to “boating around” occur?

Buzz Aldrin’s doctoral thesis on orbital rendezvous is available at https://dspace.mit.edu/handle/1721.1/12652 It has a general overview which is surprisingly readable.

The breakpoint between the two was defined in the Space Shuttle Flight Rules, Rule A2-116 (emphasis mine)

A. RNDZ OPS ARE DEFINED TO INCLUDE ALL ORBITER RNDZ MANEUVERS AND ASSOCIATED RNDZ ACTIVITIES TERMINATING WITH THE INITIATION OF PROX OPS.

B. PROX OPS BEGIN AT THE COMPLETION OF RNDZ OPS WHEN THE ORBITER RANGE TO THE TARGET IS <1000 FEET AND THE LVLH RELATIVE VELOCITY IS <1 FPS IN EACH AXIS. 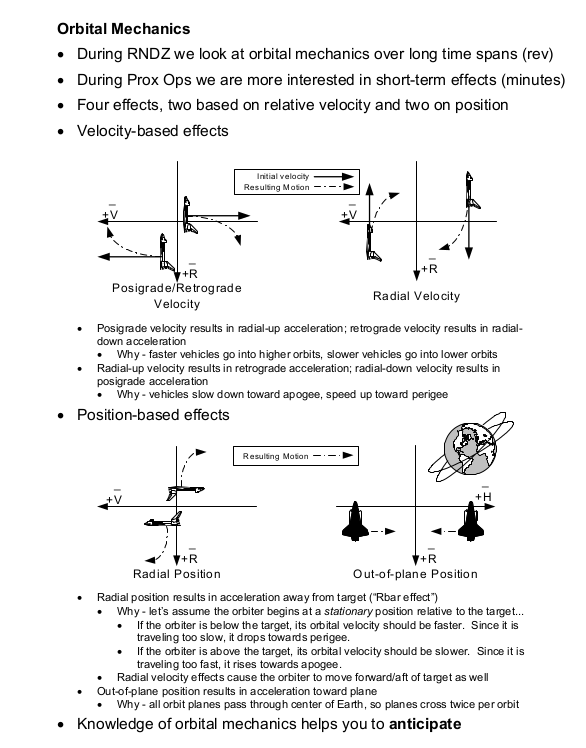 Captain Wally Schirra was the first person to ever successfully pull off a space rendezvous. Here is, more or less, how he would have answered the question (this is a quote from Capt. Schirra after Gemini 6A):

"Somebody said ... when you come to within three miles (5 km), you've rendezvoused. If anybody thinks they've pulled a rendezvous off at three miles (5 km), have fun! This is when we started doing our work. I don't think rendezvous is over until you are stopped – completely stopped – with no relative motion between the two vehicles, at a range of approximately 120 feet (37 m). That's rendezvous! From there on, it's stationkeeping. That's when you can go back and play the game of driving a car or driving an airplane or pushing a skateboard – it's about that simple."

Once the rendezvous has proceeded to the point where the range between the "chaser" and "target" vehicles is down to ~1000 ft or less, the chaser vehicle's pilot will find that, if all relative motion with respect the target vehicle is reduced to zero (or, almost zero), the task of maintaining a steady position (again with respect to the target vehicle), or stationkeeping, becomes quite simple - as Captain Schirra put it, "That's when you can go back and play the game of driving a car or driving an airplane or pushing a skateboard – it's about that simple."

In other words, once the chaser vehicle has attained the conditions necessary to set up stationkeeping, the effects of orbital mechanics become almost imperceptible - and get less noticeable the closer the two vehicles are to each other (relative motion being kept low)...

To put things into perspective, NASA's Rendezvous Crew Training Handbook (dated November 1998) states that, for the Space Shuttle Orbiter, stationkeeping, when on the Vbar at a range of 1000 feet and in a circular orbit of 160 nautical miles, should require no more than ~70 lbs. of propellant per orbit. That's pretty low. Alternatively, said reference also states that, if said stationkeeping is instead set up at 40 feet on the Rbar (with the same target vehicle orbital parameters), said prop consumption should be on the order of 100 lb/rev.

FYI, one can generally infer that, the simpler the piloting task, the lower the rate of prop consumption.

112
What are the choices today for orbital mechanics simulation software?
20
How did NASA determine the distance and velocity of voyager 1?
4
How does possible orbital eccentricity vary with distance from the Sun?
3
What is the escape velocity of Saturn at Enceladus distance?
84
What can the KSP game actually teach about spaceflight and orbital mechanics, and what are its limitations?
3
How to calculate position and velocity from given orbital elements?
5
Orbital Mechanics and Launching into the Sun