What do "initiate dragon safe haven" and "close all centerline hatches" and "next two crossings" mean?

CNN's video Hear warning to ISS after Russia's dangerous missile test plays an audio clip of a voice communication from NASA Houston ground control to the ISS crew, with the message:

...we will need to activate dragon safe haven and close centerline hatches for the next two crossings.

A reply from an ISS crew member includes:

Alright, station copies that the next time of closest approach is 07:06 and that we intend to active safe haven in dragon.

Question: What exactly do the following three expressions mean?

I understand that the astronauts grabbed critical items, perhaps put on some suits (or perhaps not) and got into some capsules, but "dragon" seems to refer to SpaceX capsules and aren't there also some Soyuz capsules involved?

Close all the doors between the centerline modules? They will be all locked and airtight?

Crossings of what? The Earth's equator? Do both northbound and southbound count? In other words is this a period of between one-half and one orbital period, that ends on a crossing? 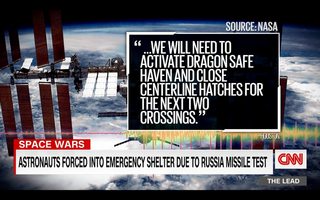 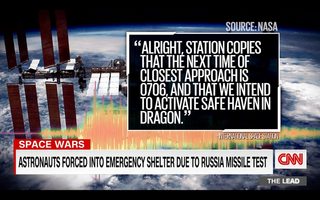 Okay Mark good morning, sorry for the early call. We were recently informed of a satellite breakup, and need you have you guys start reviewing the safe haven procedure. It's nine decimal two one. We are planning on performing through block eight, which will include closing the radial hatches. The time of concern is oh six hundred.

tl;dr this is the "normal" response to a debris encounter that pops up too late for the ISS to maneuver out of the way

If MCC-H is notified of a conjunction very late, there may not be enough time to execute a burn. As mentioned previously, MCC-H and MCC-M must be notified no later than 5.5 hours before the TCA to configure the systems (primarily solar arrays), start the burn sequence on board the Russian Segment, and actually perform the burn.

If insufficient time is available, “safe haven” procedures allow the ISS crew members to close hatches in the USOS, enter their respective Soyuz vehicles (which are used to transport crews to and from the ISS), and close the hatches in the Soyuz to be best set up for withstanding an impact and performing an emergency departure and deorbit, if required. Keeping hatches closed ensures that if a module is penetrated by an impact event, the loss of air is limited to that module and not the entire ISS volume. Keeping the crew members inside the Soyuz minimizes their exposure to an ISS depressurization that results from impact and has them prepositioned in the vehicle that can return them home if the ISS is significantly damaged.

Safe haven was executed on several occasions earlier in the life of the ISS before the advent of PDAM, when only the nominal DAM was available and required a 24-hour notice. PDAM was developed specifically to avoid the safe haven scenario and has been largely successful, since notification of a conjunction by JSpOC with less than 6 hours remaining is extremely unusual.

This document predates Crew Dragon ops, so read "Crew Dragon" for the appropriate crewmembers in the above description of safe haven.

The rest of this post is not an answer but speculation.

Not the answer you're looking for? Browse other questions tagged iss terminology dragon-v2 emergency or ask your own question.

32
Have any animals that have been studied onboard the ISS come back alive?
9
How much crew time is required for visiting craft, at the ISS?
22
Does the ISS team plan cargo flights when at half crew on purpose?
9
What is the ISS maximum altitude?
8
Where/how did the CRS-10 Dragon capsule "wait" before the 2nd, successful docking attempt?
9
What is the orbit and expected lifetime of Crew Dragon trunk?