What is the "recovery" helicopter for the Electron booster carrying?

While we won’t be attempting a mid-air capture today, for the first time a helicopter will be stationed in the recovery zone offshore to track and observe the descending stage. Today is about testing comms and tracking to refine operations for future Electron aerial captures.

and caries the image below. I've included a crop of the package carried by the helicopter and using image processing skills learned watching reruns of Star Trek and other 60's and 70's TV shows ("Enhance!") I've tried to make it easier to see.

Is this a sonar transducer used to track and map the location rocket body as it sinks to the likely shallow sea floor and to keep an eye on "prospectors" looking to salvage it? (looks like one)

Or a communications package used to track and communicate with the booster on its way from space to the ocean's surface?

Or something else entirely?

Question: What is the "recovery" helicopter for the Electron booster carrying? 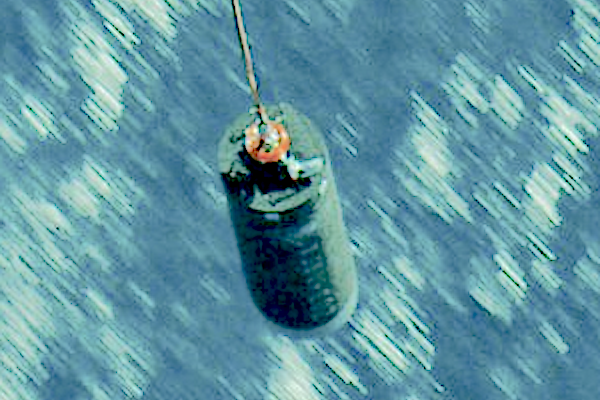 It is carrying a mock Electron first stage used to test recovery operations. I believe that image was taken from a ~March 2020 drop and catch test.

Here is a Rocket Lab video of that test (note the same yellow rotor helicopter and distinctive orange parachute hardware @ ~1:00):

Not the answer you're looking for? Browse other questions tagged identify-this-object recovery rocketlab electron or ask your own question.

39
What was ejected from RocketLab's Electron launch vehicle at T+6:25 during stage two burn?
3
What is the thickness of the Falcon 9 - Electron outer casing (outer shell)?
2
Is it coincidence that the Electron has very similar dimensions to the Pegasus?
8
Why does the Electron rocket throw sparks; especially at SECO?
4
Could the Electron launch a cubesat to Mars
5
Were the "frogmen" who performed ocean recovery Navy SEALs?
22
What is "anti-geysering" and why would you turn it off 70 seconds before launch?