How many watts of electricity are available for systems during a Mars transit?

The Curiosity Rover's Multi-Mission RTG (MMRTG) and was used during its spacecraft's transit to Mars. The MMRTG produces 2000 watts of thermal energy or 125W-100W of electrical energy.

Is a Mars bound spacecraft limited to ~100 watts of electric power for onboard systems during its 200+ day transit? That does not sound like much, although it would run a current laptop.

There is not a theoretical limit on the amount of power that can be available during Mars transit.

Power generation systems are normally sized for the operational case which requires the greatest demand over the entire mission. For most robotic Mars missions to the surface, this can be expected to occur during the surface operations phases. The power consumption during cruise is typically low since the majority of the spacecraft systems will usually be off or in a standby mode.

If the mission uses an RTG for power generation on the surface, it makes sense to also use the power it generates to keep the spacecraft alive during the cruise. If you wanted to increase the power generated during cruise this could be done by carrying additional RTGs onboard. Of course, there is a cost associated with this (both financial and in terms of mass/volume resources available).

However, not all surface missions carry RTGs. In this case, solar arrays can be used to generate power for the cruise stage during transit to Mars.

RTGs will provide a constant power output that will gradually decrease with time. The power generated by solar arrays will vary during the transit as the distance from the sun increases. We can estimate this since we know that a). the solar flux at Earth is about 1360 W/m2 b). the inverse square law tells us roughly how much the solar flux will decrease with distance from the sun and c). space based solar arrays can be assumed to have a conversion efficiency of ~28%. Taking this into account we can approximate how much power our cruise stage could generate for every m^2 of solar array area it carries: 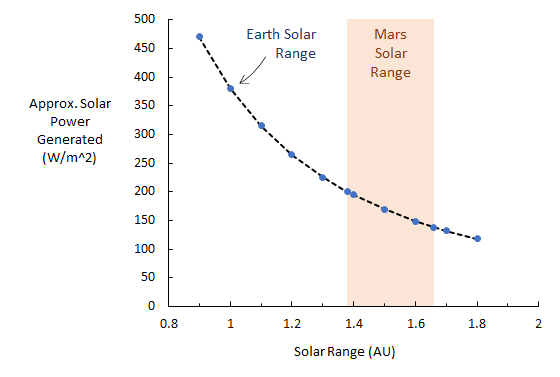 Note how the power available at Mars orbit will vary due to the eccentricity of its orbit around the sun (varying between ~1.38 AU and ~1.66 AU).

As mentioned, for most missions the power demand during cruise is not especially high. This might not the case however if electrical propulsion (EP) is used for the transit to Mars, since power is needed to continuously thrust.

As an example, consider ESA's Earth Return Orbiter (ERO) being developed for the Mars Sample Return campaign with NASA. It is planning to use a highly capable EP system for the transit to Mars and back. This link from Airbus (the mission's prime contractor) states that ERO is being designed with a 144 m^2 solar array. Using the chart above we can estimate that this must be able to produce around 50 kW at Earth solar range and about 20 kW at farthest Mars solar range. A fair bit more power than in the examples cited in your question!

No, you are not subject to such limits. At Mars orbit, you can expect about 600 W/m^2 of solar radiation. While solar panels are less effective, they are still significantly more efficient in terms of W/KG while in orbit or free flying.

The real question is... how much power do you actually need while free flying, and can you afford the mass required?

Not the answer you're looking for? Browse other questions tagged mars voyager curiosity power rtg or ask your own question.

23
What factors limit the lifetime of an unmanned spacecraft?
18
What powers New Horizons?

4
How does Curiosity analyse Mars' rocks for finding signs of life?
9
Are the Mars elevation data publicly available?
15
How does the launch risk for a plutonium RTG and a uranium fission reactor compare?
7
Are there "rover-friendly region maps" for Mars?
0
Are there studies on human Mars missions available?
5
Electricity for magnetic shield at Mars L1 Lagrange point
1
Does the Dragonfly project (quadcopters on Titan) envision attached RTG's or would they be static and revisited for charging?
3
How many "main" batteries does the ISS have? How many are still nickel-hydrogen?
3
Does curiosity's RTG generate neutrons as this NASA CheMin X-ray detection system webpage suggests? If so, how?