How will the LICIACube cubesat transmit DART impact images back to Earth? What kind of antenna and radio will it use?

The Mars Cube Ones or MarCOs were 6U cubesats that were deployed in deep space during the InSight mission to observe it during a critical, dynamic period of its mission, in this case the N minutes of terror during reentry, and then convey data back to Earth.

To do this they were equipped with giant phased reflector surfaces to simulate an off-axis parabolic reflector for high gain and reasonable data rate.

For more on the antenna see answers to

LICIACube is an Italian 6U cubesat to be deployed in deep space during the Dart mission to observe it during a critical, dynamic period of its mission, in this case the N minutes after DART impacts "DidyMoon (Dimorphos)", and then convey data back to Earth. (hat tip to Scott Manley for the nickname)

In this case the data will be primarily images from its two cameras; LUKE and LEIA.

Question: How will the LICIACube cubesat transmit DART impact images back to Earth? What kind of antenna and radio will it use?

How will its antenna, distance and data rates compare to MarCO?

below: Both MarCO cubesats, from here (now here). 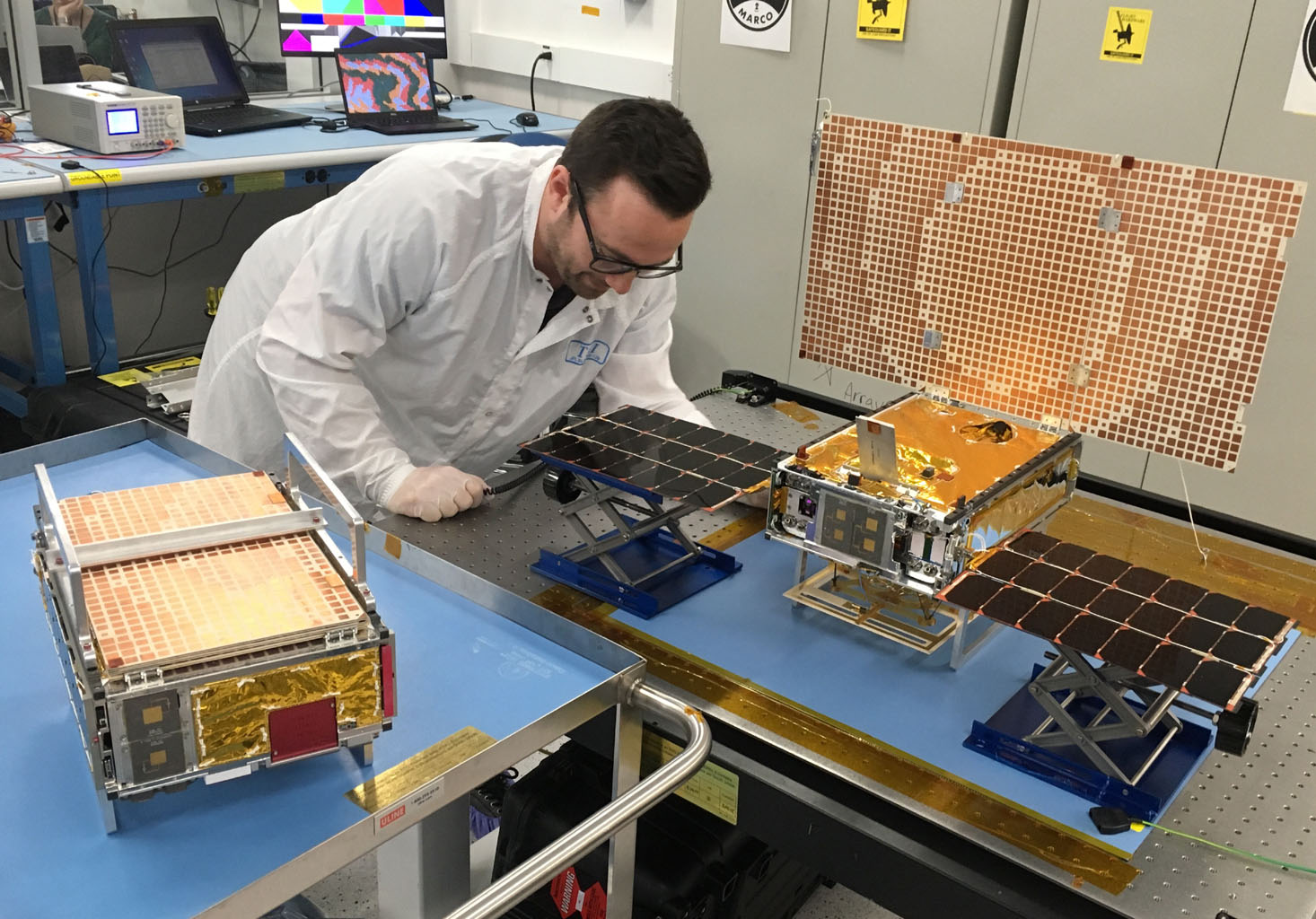 I think it's all about distance.

Let's make the reasonable assumptions that: (1) LICIAcube uses also X-band to beam data back to Earth; (2) the available transmit power is the same as that on MarCO; and (3) the receive antenna on Earth is the same.

MarCO has to close the link-budget at ~300 millions Km from Earth, while LICIAcube needs to do so at only 11 millions Km (DART impact). Space loss being proportional to the square of distance, that's an advantage of 29dB for LICIAcube.

On the photo of MarCO (given in OP's question), we can see a low-gain 2x2 patch array antenna (same orientation as the high-gain reflectarray, but "sticked" on the front side of the spacecraft body). Such antenna has a gain of 12+ dBi, as can be read on Enduro. Compare this to the 29dBi gain of the reflectarray (see Hodges [1]).

Hence the net link-budget gain for LICIAcube vs MarCO is 12dB (if it uses the Enduro's 2x2 patch array antenna, as I suspect it does, and if everything else are kept identical).

The [communication] subsystem includes an X-Band transponder that manages downlink and uplink communications and is connected to four X-Band patch antennas.

Hence, the X-band is confirmed. Further,

The set of antennas consists of:

Not clear yet why they need so many antennas and why are these antennas positioned on opposite sides of the box. But if they intend to use the 22dBi antenna then the bitrate they can achieve will be much higher than 128Kbps, although not 10 times more. Because higher gain induces more stringent pointing accuracy. Note that for MarCO, a 3 dB pointing margin is taken (see Hodges [1]).

The paper does not give the storage capacity, but it mentions the Argotec HAWK platform (the same used by MarCO by-the-way). According to Argotec data HAWK-6 can have up to 32GB of storage. At 128Kbps download (using the 12dBi antenna as worst scenario), this would require 2 Millions seconds (~560 hours) of connection with a Deep Space Antenna on Earth. From this we can deduce that, at a rate of 4-hour connection per day (rough estimate), we need 140 days to beam back 32GB of data.

Not the answer you're looking for? Browse other questions tagged communication cubesat antenna dart liciacube or ask your own question.

10
How does the pattern on the MarCo cubesat's antenna boost data-transmission?
1
How does a 22 dBi X-band "patch" antenna get so much gain and how well behaved is its high-gain radiation pattern?

5
How can the two MarCO cubesats remain reliably close to InSight during their six month trip to Mars?
4
MarCo, Polo? Any further news, or images, or transmissions from the MarCo deep space cubesats?
1
Is the prompt relay of landing telemetry by the MarCo cubesats to Earth really a "first"?
2
UHF transceiver for cubesats network
1
Did the MarCo cubesats photograph each other or the Centaur stage from which they were deployed?
9
What is the pop-up circular disk with spiral pattern in this NASA animation of the Dragonfly helicopter for Titan? Antenna? Kind, band, target?
1
How does a 22 dBi X-band "patch" antenna get so much gain and how well behaved is its high-gain radiation pattern?
1
Deep space marksmanship; will DART's intercept and impact trajectory represent the best ever if successful? If so, by how much?
26
How will DART be able to hit a 170 meter rock dead-center at over 6000 m/s? What technologies will be use and how will they work together?