Thermal batteries rather than battery-powered heaters for small craft on Mars; how much mass would it add, how much would it replace?

As an example, the Ingenuity helicopter on Mars charges its batteries each sunny day (which is every day except when it isn't) and discharges them substantially each cold night (which is all of them) to keep themselves from freezing damage and to keep other critical goodies from getting too cold. Solar powered Mars rovers and landers on Mars do the same, which is all of them except for MMRTG-equipped Curiosity and Perseverance that use heated fluid circulation.

A thermal battery is:

...in general something that can store thermal energy and while an electrical battery can serve this purpose, a pot of water, wax, or any other material that undergoes some kind phase change within a useful temperature range with a sufficient enthalpy of change can potentially be used as a thermal battery.

A thermal energy battery is a physical structure used for the purpose of storing and releasing thermal energy—see also thermal energy storage. Such a thermal battery (a.k.a. TBat) allows energy available at one time to be temporarily stored and then released at another time. The basic principles involved in a thermal battery occur at the atomic level of matter, with energy being added to or taken from either a solid mass or a liquid volume which causes the substance's temperature to change. Some thermal batteries also involve causing a substance to transition thermally through a phase transition which causes even more energy to be stored and released due to the delta enthalpy of fusion or delta enthalpy of vaporization.

But in that case it was called a "thermal capacitor" rather than "thermal battery" for some reason.

The nice things about a thermal battery include

Question: What would a solar thermal battery system look like for an aircraft on Mars? Roughly how much mass would it add? How much would it replace?

Remember that Ingenuity's battery's mass and energy capacity are driven by the need to both have a usefully long and satisfying flight and still have enough energy to stay warm overnight along with a good margin for safety.

Adding a thermal battery may substantially reduce the required energy capacity and therefore mass of the electrical battery, so adding the thermal battery is not all "doom and gloom."

Question: What would a solar thermal battery system look like ?

Answer: It would look the same as Ingenuity ! 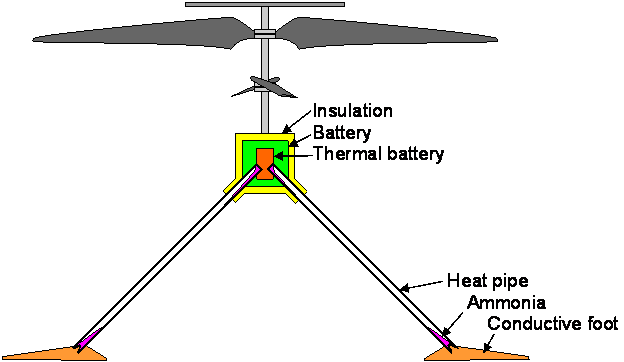 Well, it might look a bit different since the PV panels could be smaller. Less power for night time heating would be needed. The battery capacity would be lower, but the reduced battery volume would be (at least partially) replaced by thermal battery volume.

If the four landing legs were replaced with heat pipes, and the central core of the battery with a phase-transition thermal battery, there would be very little change in the look of the helicopter.

Heat pipes transfer heat by using absorbed heat at one end for phase change of the working fluid from liquid to gas. Gas diffuses along the tube until it condenses at the other end, releasing the stored latent heat. The condensed working fluid returns by gravity. Heat pipes have no moving parts and work forever, or until they leak, whichever comes first. They operate over a large temperature range (which must be above the triple point of the working fluid). For instance, ammonia-filled heat pipes function well from 200K-350K https://llis.nasa.gov/lesson/698

Heat pipes are common on spacecraft (usually using ammonia as the working fluid). In our application, design is simplified because the spacecraft is operating in a gravity environment. Gravity makes it easy for heat pipes to act as a heat diode: heat is conducted “up”, but not “down” the pipe, preventing stored heat from being wasted back down to the feet.

The working fluid would be chosen to optimize for the temperature difference between daytime “foot” temperature and maximum tolerated battery temperature. Viking measured regolith temperatures from -107C to -17.2C. The triple point temperature of the working fluid must be below heat source temperature while heat is being transferred. There is no problem if the fluid freezes in the feet at night. Mars atmospheric temperatures may get up to 20*C in summer, but heat transfer from the tenuous atmosphere would be minimal compared to regolith.

Material choice for the heat pipe tubes would need some thought. Mechanical requirements for landing stress would need to be considered. Heat transfer at both ends of the heat pipe would be maximized by aluminum extrusions with internal fins, as is used in spacecraft heat pipes. The mid-section could be made of composite to minimize weight and thermal conductance.

There are many materials available for thermal battery latent heat storage. In a pinch, linseed oil (MP -24*C) might work but there is likely something more suitable commercially available https://www.dynalene.com/heat-transfer-fluids/?gclid=EAIaIQobChMIyO61la_n9AIVQ0FyCh3o7AO9EAEYASAAEgLj7vD_BwE

Not the answer you're looking for? Browse other questions tagged mars solar-power thermal-control ingenuity helicopter or ask your own question.

10
How cold are the Voyagers now? Colder than LOX? Colder than SOX?
14
Opportunity's last tau was 10.8; what does that mean and how is tau defined and measured?
10
For how long could the Mars helicopter Ingenuity keep up with the Perseverance rover if it wanted to?
5
How much wax is on the Moon? (Lunar Roving Vehicles)
8
How would the Voyagers finally die if allowed to transmit to the bitter end?
2
How Ingenuity ensures it does not fly away from the range of connection from Perseverance?
3
In their first 100 sols which NASA Mars rover drove the furthest and which one the least?
7
What kind of insulation is used in the Ingenuity helicopter?
4
Could Ingenuity stay warmer at night by landing on (or near) Perseverance's RTG?
3
Which is currently further from their landing site: Ingenuity or Perseverance? How far away are they from each now?
See more linked questions

5
Does freezing carbon dioxide present a "temperature obstacle" on Mars?
1
How does fuel requirement change with mass when traveling from cislunar orbit to Mars?
3
Why not a landing platform with solar cells on the Mars 2020 rover for the helicopter scout?
3
What was NASA's “LUROVA” Operational Thermal Computer Model analog or digital? How were capacitors used?
1
Does the Dragonfly project (quadcopters on Titan) envision attached RTG's or would they be static and revisited for charging?
8
When is the last time that a battery-powered spacecraft was launched without an RTG or solar-electric power?
5
Why does ISS uses liquid ammonia in the Active Thermal Control System?
4
Just how preferable are afternoons for flying Ingenuity? Why?