How does a 22 dBi X-band "patch" antenna get so much gain and how well behaved is its high-gain radiation pattern?

@NgPh's answer to How will the LICIACube cubesat transmit DART impact images back to Earth? What kind of antenna and radio will it use? quotes LICIACube on DART mission: an asteroid impact captured by Italian small satellite technology (SSC20-WKIII-06 from the 34th Annual Small Satellite Conference):

The [communication] subsystem includes an X-Band transponder that manages downlink and uplink communications and is connected to four X-Band patch antennas.

Hence, the X-band is confirmed. Further,

The set of antennas consists of:

In this answer I find that an X-band downlink (space to Earth) frequency may be about 8.4 GHz. For a circular aperture which approximates a flat patch antenna array as well as a sphere approximates a cow, a wavelength of 3.56 cm would need a "dish" diameter of

Dart is a 6U cubesat so one 10 x 30 cm side could easily support a patch antenna of a similar area, so the numbers work.

But the radiation pattern of the patch array could be complicated and lumpy and offer maximum gain in an awkwardly shaped pattern constraining the spacecraft attitude during transmit modes.

Recall that a patch array will likely be some planar arrangement of individual flat radiators in such a way that their amplitudes add in-phase in a given direction, mostly likely normal to the surface. Such a planar, passive like the single user Starling ground terminals. where the elements have different and variable phases so as to steer the beam.

That's opposed to a phased array where the elements are phased in groups or individually in order to steer the beam electronically.

Question: How does a 22 dBi X-band "patch" antenna get so much gain and how well behaved is its high-gain radiation pattern?

Being non-expert in patch array antennas, I can't answer the "how".

Nevertheless, X-band antennas in this range of gain and compatible in form factor to 6U Cubesats are commercially available.

Of course, the beam pattern cannot be symmetrical, but it doesn't look "ill-behaved" (whatever this means). This simply implies that LICIACube must maintain a better pointing in one direction ("X-cut") than in the orthogonal one ("Y-cut"). The Half-Power Beamwidth is 10° for X-cut and 18° for Y-cut (see datasheet). I can't see any big constraint from this.

From the above linked "High-Gain X-Band Microstrip Patch Array for CubeSat Systems" example and PDF datasheet: 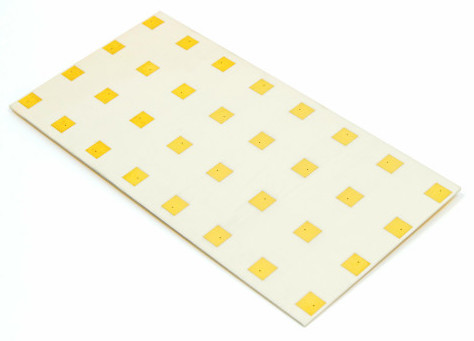 9
When is a phased array antenna not a phased array?
3
How will the LICIACube cubesat transmit DART impact images back to Earth? What kind of antenna and radio will it use?
1
What is the highest non-optical frequency used or tested for use in deep space communication?
2
How should we point our SpaceX Starlink ground transceiver antennas?

5
How is GAIA's phased array configured, mechanically and electrically?
9
How does Curiosity know how to point and move it's high gain antenna in real time?
10
How does the pattern on the MarCo cubesat's antenna boost data-transmission?
3
How exactly were the signals from quad dishes of Apollo Deep Space High-Gain Antenna or Russian B-529 processed for local control of tracking?
3
How would I determine the power usage for a X-Band High Gain Antenna?
9
What is the pop-up circular disk with spiral pattern in this NASA animation of the Dragonfly helicopter for Titan? Antenna? Kind, band, target?
13
Is it possible for LEO satellites to detect a usable signal from regular mobile phones on the ground?
3
How will the LICIACube cubesat transmit DART impact images back to Earth? What kind of antenna and radio will it use?
2
Antenna wrap material suitable for lunar & cis-lunar environment