Could Apollo's Sextant navigation use similar geometry as Marine Navigation?

My grandfather would be familiar with the instrument in this astronaut’s hands, although he would be puzzled by the view out the window. 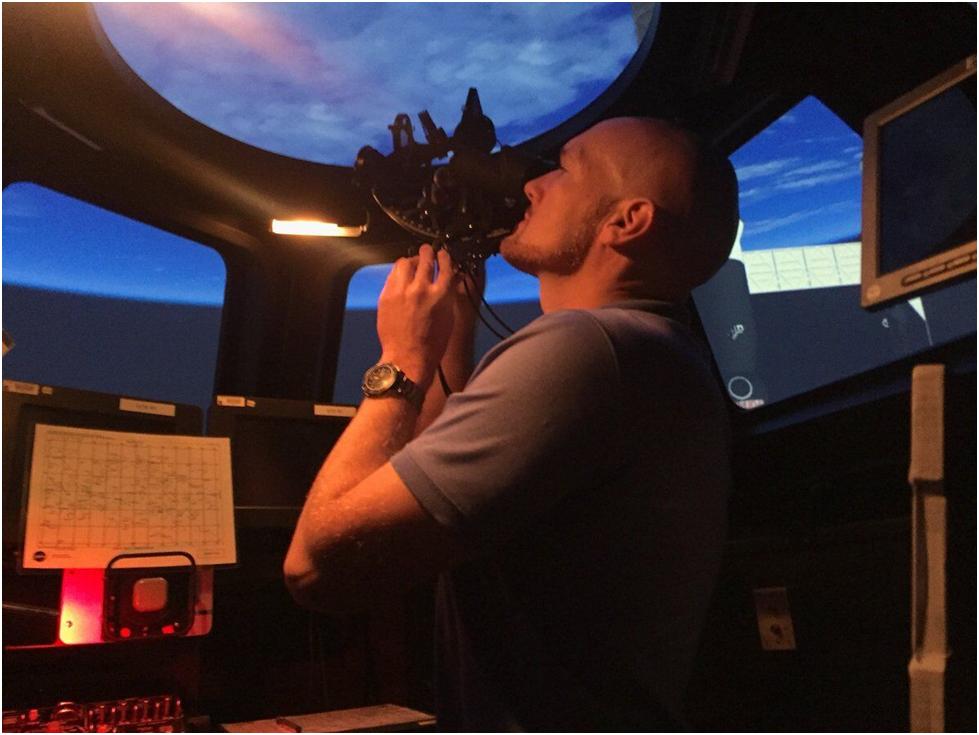 There are numerous internet references to Apollo spacecraft using a sextant for cislunar celestial position fixes but I’m unable to find an explanation of the geometric method used.

The sextant on Apollo had 3 functions:

Offshore Marine Celestial Navigation uses the horizon as a horizontal reference plane with which to measure the angular altitude of a celestial body. This provides a circle of position on the Earth (and celestial sphere). Three or more circles from different celestial bodies will provide intersecting circles of position, giving a fix. 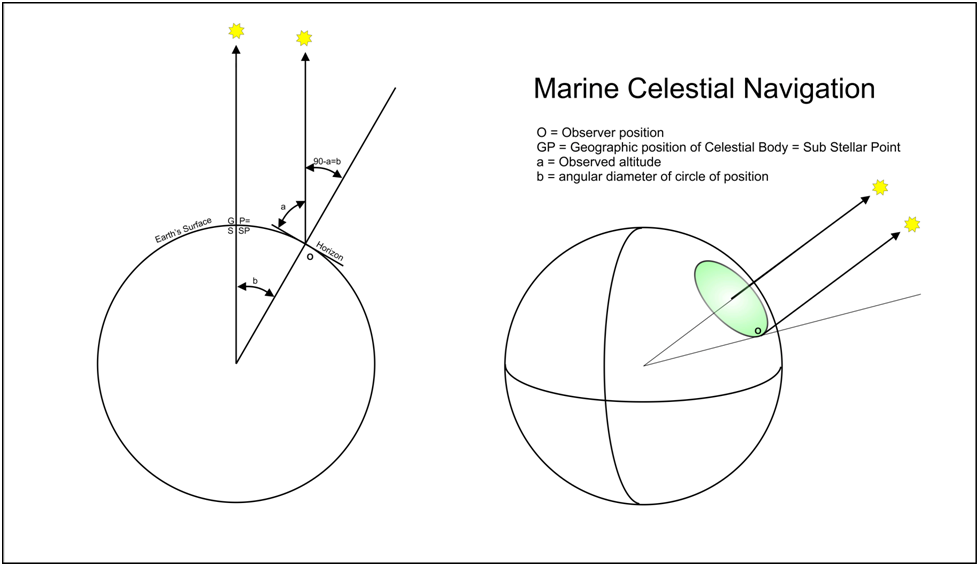 Sighting on the visible horizon from space provides a “cone of position”. The apex of the cone is at an unknown altitude. Three such cones from observation of three different celestial bodies could give a 3D fix if you have computer program clever enough to figure out the conic intersections. 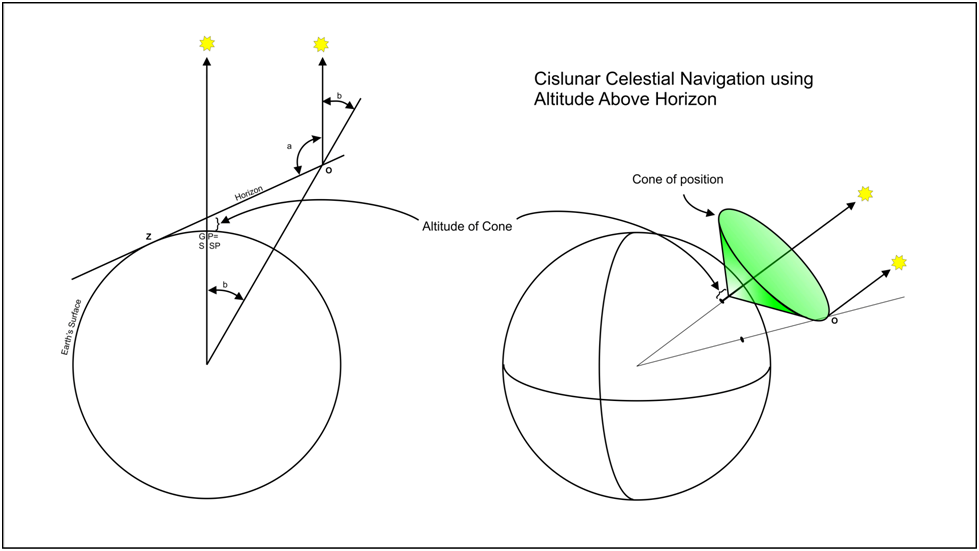 Another possible method is to go back to traditional marine celestial navigation by obtaining three circles of position. A sight on the Earth’s diameter would give the altitude of the observer. It would also allow the apparent angular altitude of the celestial body “a” to derive “b”. 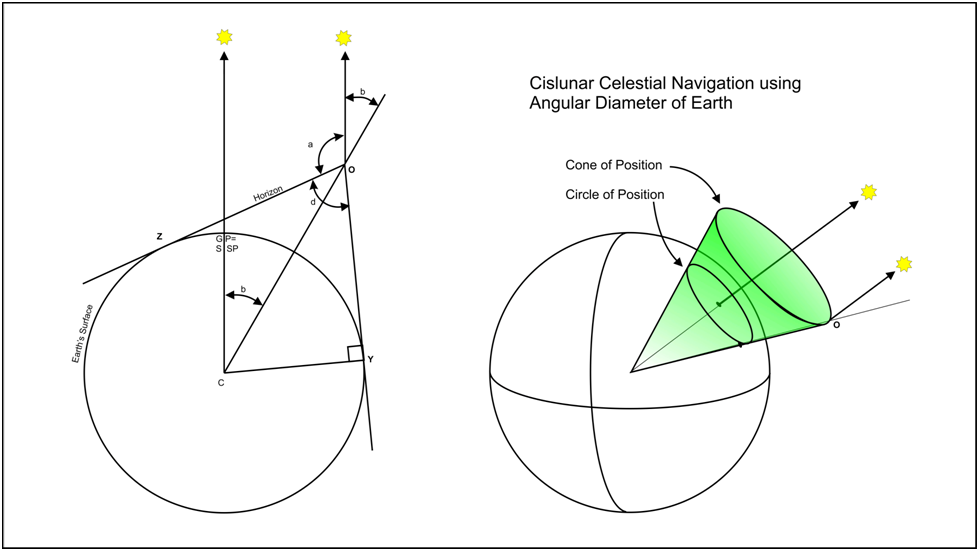 In the sketch, “a” and “d” would be measured. Since the radius of the earth and all angles are known, the observer’s altitude can be calculated. Three celestial observations give three intersecting circles of position on the celestial sphere. This can be translated into geographic position if desired.

Sextants (including the ones on Apollo) are calibrated to 10 seconds of arc. Lunar diameter measurements could approach this accuracy, but Earth diameter measurements would be hampered by the “fuzzy edge” of the atmosphere. In Apollo 8, Jim Lovell was “remarkably consistent” in his choice of apparent horizon altitude. But he was using a single sunlit horizon and a star, not one sunlit and one night time horizon (which would often be necessary to measure earth diameter).

Since I didn't have 50 rep points yet I've posted this as a partial answer. My research came up with the following from (for example) GIS Wiki's Sextant (similar wording in Celestial Navitagion Information Network's How to use a Sextant and also here):

Held horizontally, the sextant can be used to measure the angle between any two objects, such as between two lighthouses, which will, similarly, allow for calculation of a line of position on a chart. Celestial navigation continues to be used by private yachtsmen, and particularly by long-distance cruising yachts around the world.

Question “What geometric method was used for Apollo Cislunar navigation? Answer: There was not a single geometric method. Sextant sights were reduced to lines of position, not discrete position fixes. Multiple navigational inputs were numerically integrated by the Flight Computer (FC) to continuously update the State Vector.

Question: “Could traditional Marine Celestial Navigation be used for Cislunar navigation?” Answer: Maybe. But hand calculations would be so tedious the answers would likely be irrelevant by the time they appeared. Calculations could be sped up with a computer, but it would still provide only a position fix, not a vector. The State Vector could be derived from multiple fixes, but once again the information would be stale before it arrived.

Cislunar navigation on Apollo was dependent on either the Command Module’s FC or ground based computing. It could not have been accomplished by hand calculations and ephemeris.

“The originally stated premise that a single failure should leave the system with enough capability to return safely should now be examined... If ground tracking navigation data are unavailable because of a loss of communications, then the onboard system can perform all the necessary navigation. If the onboard navigation capability fails, the ground can provide the necessary data. This applies to the failure of either the optics system or the onboard computer.”

A computer is always in the loop. It can do a better, faster job than traditional methods.

The input navigation information listed above does not include an absolute position fix, but each piece of information can update a portion of the State Vector coordinates. For instance, radar may provide z-axis data and velocity. Horizon/star sights may provide x-axis and y-axis data but no velocity data.

A value for the 6-dimensional State Vector is maintained in the FC. It uses an Earth- or Moon-centered equatorial coordinate system (depending on the sphere of influence). The computer uses equations of motion to continuously update the State Vector using numerical integration of the inertial sensor data. As other navigational inputs become available, they, too, are used to update the State Vector.

During cislunar flight, navigation observations could potentially keep astronauts busy 24/7 … too busy to perform other tasks. To optimize the workload, the flight plan limits navigation observations to those which will increase navigational accuracy. Accuracy was defined as reduced RMS error at the next transit endpoint, such as Lunar orbital insertion.

Not the answer you're looking for? Browse other questions tagged apollo-program navigation cislunar or ask your own question.

11
Is it possible to navigate space travel with no computer?
5
Was the Apollo sextant used (or tested) to determine position while in Earth orbit?
6
Which instrument did astronauts use to measure their position?
4
How did the automatic sextant on the late-1950's MIT Mars Probe work?
1
How could a sextant be used to help in a docking procedure, hypothetically?
2
What is the nature of the sextant tests on the ISS for Orion cis-lunar emergency navigation?

6
Could the Orion or Apollo command module safely land on land in an emergency due to a navigation error?
6
Is NICER/SEXTANT the first civilian "spacecraft" to determine it's own position in space without GPS or uplinked data?
5
Was the Apollo sextant used (or tested) to determine position while in Earth orbit?
10
How would the state vector be updated in the Apollo Guidance Computer during coasting to/from the moon if communication with Earth was lost entirely?
2
Could Ingenuity use the shadow of its legs for navigation to fly autonomously to the sample cache depot location?