What is different between Hill frame and LVLH frame in satellite?

What is different between Hill frame and local-vertical, local-horizontal (LVLH) frame in satellite? I add one figure to show this two frame. 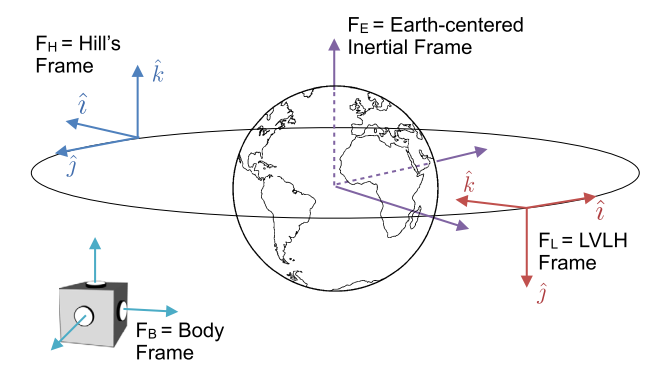 The terminology is unclear, so the correct answer varies depending on which book you read. For example, Curtis, Orbital Mechanics for Engineering Students, says they are the same, but Vallado, Fundamentals of Astrodynamics and Applications, negates the $x$ and $z$ axes of his LVLH. Neither of these matches the definition shown in the picture you posted, so at least for the purpose of reading that paper, follow its definitions, not anyone else's! Then, when you read the next paper, expect its choices to be somewhat different.

There are several reasons for this muddle. For example, in the term "LVLH", "vertical" is a vector, but "horizontal" is a plane. Therefore, any rotation of an LVLH system about its V axis has the same local horizontal, though the basis vectors chosen may differ widely. Also, when you're in space, what exactly does "vertical" mean? With respect to what?

Different authors make different choices. I described this in more detail here. David Hammen gave instructions here on various ways to make your own LVLH, with much the same warning about needing to adapt to the idiosyncrasies of whatever you're reading. The one Organic Marble's comment linked is very interesting because it shows yet another danger: the satellite in question is in orbit around the Sun, but the example LVLH frames are around the Earth. There are times when this sort of mixture of reference bodies is exactly the relationship you want for your frames, particularly if you need to adjust the attitude of an Earth-orbiting satellite in order to make its solar panels face the Sun, but it adds an additional layer of complexity that can hide nasty surprises.

Not the answer you're looking for? Browse other questions tagged artificial-satellite frames or ask your own question.

4
Are ECI and ECEF both frames and/or coordinate systems? Is there a difference?
10
Are LVLH and RSW coordinate systems the same thing?
4
ECI to LVLH conversion
1
Diagram of Hayabusa 2 in "Hill Coordinate System"; what is that exactly? How to convert it to inertial?

5
What is the correlation between the cost of a satellite and its lifetime?
8
What is the difference between GCRS and J2000 frames?
8
Building the ISS LVLH frame in ECEF/ITRF coordinates
2
Local observer coordinate system at satellite panel (LVLH coordinate system)
5
LVLH frame based on inertial velocity or relative (ground) velocity?
1
Space shuttle Initial ADI frame Before Switch to LVLH?
5
Difference between rotated frame and rotating frame
3
Why does targeting in the VNB frame lead to a different maneuver magnitude than targeting in an inertial frame?