Which S-Band ISS antenna stopped transmitting to TDRS and was replaced during the recent 2021-12-02 EVA?

Marshburn and Barron began their spacewalk at 6:15 a.m. ET, and it's expected to last for about six and a half hours. The team will replace a malfunctioning communications antenna.

Live coverage of the spacewalk will stream on NASA TV and the agency's website. The astronauts will replace an S-band Antenna Subassembly by using a spare that is already attached outside of the space station. The S-band radio frequencies are used to transmit low-rate voice and data from the space station more than 220 miles (354 kilometers) to flight controllers on the ground, according to NASA.

"That timing allowed us to have Tom and Kayla go into our neutral buoyancy laboratory, or big pool where we practice spacewalks, and practice our exact spacewalk," LaCourt said.

Overall, the loss of this antenna has a low impact on space station operations. However, maintaining antennas like this one allows for a redundancy in communications. Installing the spare, which has existed outside the station since 2010, will allow that system of backups to continue. The station has other low-rate S-band systems and high-rate KU-band systems that relay videos back and forth.

Since I ask a lot of antenna questions, I'm going to take a guess. The article says the communications it to TDRS satellites which are generally located in three clusters spaced out by about 120° in GEO and so will be

So I'm guessing that we're looking for a medium gain antenna that is articulated, i.e. it constantly changes the direction that it's pointing.

It's obviously not this, from @MarkAdler's answer to What is the purpose of the rotating dish antenna on the ISS since it's moving at a way faster angular rate than the ISS orbits:

Here's a dish antenna that according to @OrganicMarble's answer is in storage on the outside of the ISS, ready to be retrieved during an EVA:

and here are the active dish antennas that can (be seen to) move (in the video) to maintain a link with TDRS satellites in GEO.

But these are Ku-band, higher frequency and so likely higher gain and bandwidth than an S-band antenna described in the article.

Question: Which S-Band ISS antenna stopped transmitting to TDRS and was replaced during the recent 2021-12-02 EVA?

The ISS has 2 S-band antenna support assemblies (SASAs). There is one on each of the S1 (Starboard 1) and P1 (Port 1) truss segments.

This EVA replaced the one on the P1 truss.

Source: Downloaded the official visualization package from https://vrlab.jsc.nasa.gov/doug/flight_packages/: It's called "US_EVA_P1_SASA_RR_v5.exe" which is a big clue right there. Load it up in official NASA visualization software DOUG and you can see cool animations of the whole EVA. Here's the start of the actual antenna installation - after all the prep and movement has been done. 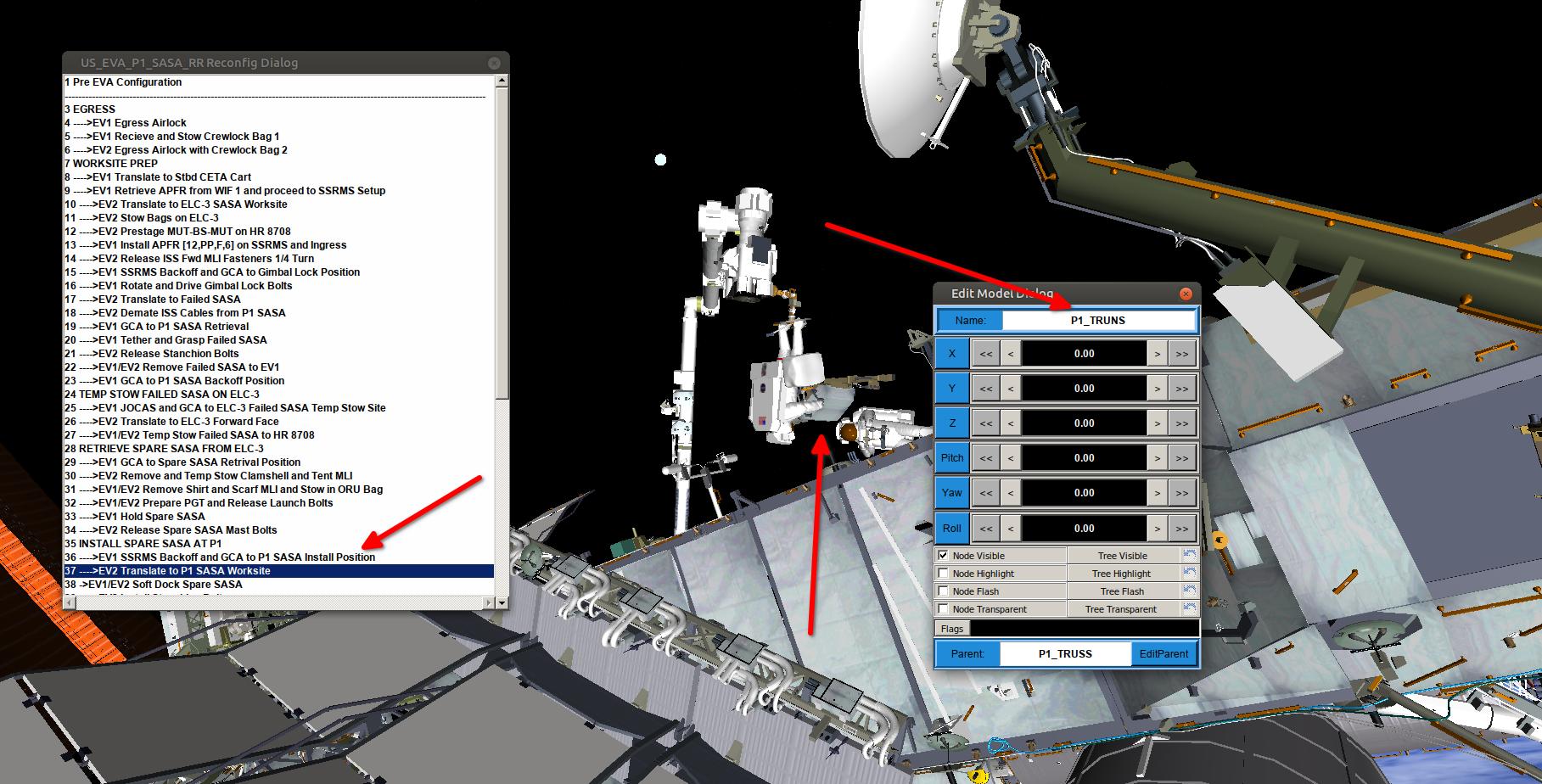 At the left of the image you can see the dialog box with all the EVA tasks / steps in order.

Confirmed as the P1 SASA by NASASpaceflight.com (emphasis mine)

In September, a routine check of the String-2 SASA on the P1 Truss – which has been operating for the past 20 years – revealed that the return link had degraded, meaning the SASA could not provide any downlink to the ground. The uplink, however, continued to operate normally.

Since the String-1 SASA continued to function, and with the Ku-band system providing a backup command and control capability, replacing the unit was not considered a priority.

However, a high beta-angle period coming up in December could cause the fully operable String-1 SASA to reach its temperature limits and cease functioning, which would leave the ISS without any S-band downlink capability due to the degraded String-2 SASA.

For this reason, ISS program managers decided to remove and replace the degraded SASA in order to restore redundancy prior to the high-beta period.

Read more about ISS comm antennas here: Do antennae on the ISS have to constantly move to maintain data links?

27
What is the purpose of the rotating dish antenna on the ISS
25
What is the function of this (apparently) fixed dish on the ISS?
11
Do antennae on the ISS have to constantly move to maintain data links?

5
What kind of condition do Orbital Replacement Units (ORUs) keep while mounted on the outside of the ISS?
4
Was this large pieces of "space junk" just released from the ISS in the "nadir and retrograde" direction?
9
How does Curiosity know how to point and move it's high gain antenna in real time?
2
What GEO relay satellite will the ISS use for end-to-end optical communication with a ground station?
3
Does this electronics box, or any other non-spacecraft released by astronauts have a TLE?
3
Will Optical communications be possible between Columbus' Ka-band (COLKa) Terminal at the ISS and EDRS?
1
X-Band range and data
3
What is a Beam Waveguide dish and why do deep space communications stations use them?
7
Why are modern satellite ground station and deep space communications dishes with secondary mirrors almost always Cassegrain?
1
How does a 22 dBi X-band "patch" antenna get so much gain and how well behaved is its high-gain radiation pattern?