Why are all trajectories in space a conic sections?

All trajectories available in space: circle, ellipse, parabola, hyperbola, straight line are parts of cone. Why? Does the spacetime have a conic shape?

The question of which force laws allow what kinds of orbits received considerable attention in classical mechanics, some of it very recent. The strongest result dates to 1873, when Joseph Bertrand proved that of all possible laws where the attractive force scales as some power of the distance, the only two such forces for which all orbits are closed are $r^{-2}$ and $r^{+1}$ --- the inverse square law and the simple harmonic oscillator.

The constraints under which this holds are

There are also two weaker related results which can be discovered along the way as part of some derivations. First, $f(r)=ar^{-X}$ has stable circular closed orbits for any $X<3$. Second, for $X=3-Q^2$, where $Q$ is any rational number, it has stable closed orbits that look like this.

These are standing waves on a circle, as found in electron orbitals in the Bohr model, the jet stream, and the allowed pitch harmonics if you bent an organ pipe into a torus.

The ripples shown in the image are in general greatly exaggerated for the central force problem, where such orbits are only truly closed at first order in the Taylor series approximation of $f(r)$. [However, the wiggles in the atmosphere which we call the jet stream really are that big, as a high-altitude weather map of a sufficiently large region shows.] Of course, the reason physicists are so in love with the simple harmonic oscillator is that $f(r)=-kr$ equals its own one-term Taylor expansion, so one-term Taylor approximation turns everything into a simple harmonic oscillator. That means the ripples can indeed get that large, but only in the other Bertrand-allowed case, that is if the two point masses were joined by an ideal spring (Hooke's law).

As Michael Seifert mentioned in a comment, trajectories should be concave with respect to a center of attractive force, or convex towards the center of a repulsive one. What's going on here with these wiggles, then? The derivation I learned from Goldstein (1980) makes use of the "equivalent one-dimensional problem", which looks solely at the radial component of the motion, but accounts for the conserved angular momentum, and the kinetic energy of rotation it carries, by changing the form of the potential energy function. That is, although for the full three-dimensional Kepler problem, the potential $V(r) = -k/r$, bookkeeping the angular momentum $L$ means that to match the same behavior in the equivalent one-dimensional problem, we have to add an extra term, resulting in $V(r)=-k/r + L^2/2mr^2$. This means that for large enough $r$ (for any given $k$, $m$, and $L$), the potential is attractive, and for small enough $r$, the potential is repulsive. Motion that is precisely circular in 3D here must be translated to the 1D constant point solution $r(t)=r_0$. This $r_0$ is the value at which $V(r)$ takes its minimum, and where it changes from attractive to repulsive. Trajectories which do not escape this transformed equivalent potential are bounded between two circles, and swing back and forth between them while going around with constant $L$.

What this truly looks like in the Kepler problem is what happens when you draw a precessing ellipse: it either slightly undershoots or slightly overshoots the point where it would close, by the same amount every orbit, leading its path to gradually form a figure like this, which has the correct concavity: 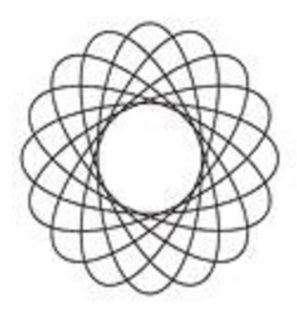 The names we give to these two special radii, at least for orbiting the Earth, are the familiar "apogee" and "perigee". Eventually, for most potentials, the whole space will be filled in (in the asymptotic sense of arbitrarily close approach to any point within a computable time); for rational exponents ($X=3-Q^2$) such patterns can theoretically repeat, but aren't stable to any perturbation.

There are at least a dozen alternate derivations, counting just those cited in "A truly elementary proof of Bertrand's theorem", Chin (2014), plus "An Even Simpler “Truly Elementary” Proof of Bertrand’s Theorem", Galbraith and Williams (2019).

The existing answers here are either wrong (making it sound like the conic section orbits are easily deduced by simple algebra from the inverse square law of gravity) or overly extensive and technical for what OP asked.

The conic orbits are indeed a remarkable fact. To Kepler they suggested a mysterious cosmic harmony. Newton found that they are merely a contingent and approximate outcome of a deeper principle -- the $1/r^2$ force law. To show this, Newton had to invent calculus -- no small feat.

In a broader sense, if we imagine possible universes with different dimensionalities and force laws, the anthropic principle argues that life would arise in a universe where planetary orbits can be stable. Our actual universe is such that this holds -- not that orbits are exactly conic sections (they aren't, due to multi-body perturbations, relativistic effects, etc.), but that they're close enough to be stable. Other force laws tend not to produce stable orbits at all.

So arguably, we may owe our very existence to some quite subtle and lucky math regarding the dynamical consequences of $1/r^2$ forces. For me this inspires awe.

Conic sections tend to happen when you have $r^2$ terms, as they have such terms in the equations that define them. Here are the equations for some of these shapes. They are conic sections because gravity is the dominate force in space travel, which falls away as $r^2$

Essentially for gravitational problems that result in a single body being the dominate force, and a secondary body (Called 2 body problems), the second body, when not accelerating, will have to be accelerating as some form of a conic section, because gravity is the only force, operating from a single point, and it is defined by falling away as the square of the distance.

The answer from Uwe above is almost "there", but not very accessible. The two-body equation describes the motion of a small mass orbiting a larger body. There is an elegant derivation in Vallado, p.27 starting with crossing the specific angular momentum vector with the two body equation. You do a couple of pages of cool substitutions, exercising your vector identities, and end up with the polar form of a conic section (p.29). That's the expansion of Uwe's comment.

When you get the moon involved you have to restrict the problem to be able to analytically solve it, this is most famously the Circular Restricted 3-Body Problem (CR3BP), see Vallado figure 12-13, p.968. That equation does not result in the polar form, you get stable and unstable gravitational "manifolds" to mess around with, "Highways in Cis-Lunar Space."

Include the Sun and Jupiter and well, have a good day.

Not the answer you're looking for? Browse other questions tagged orbit trajectory patched-conic or ask your own question.

7
What plane will DSCOVR’s orbit be in?
9
Optimal trajectory for solar electric propulsion?
5
How to best patch my conics?
4
Why don't spacecraft get left behind once in deep space?
23
Do you need 0 km/s velocity to crash into the sun?
10
Is this plot of deep space trajectories correct? Did most launch retrograde from Earth? Why do some change direction between planets?
3
Patched conics Earth to Mars transfer, find Vinf at arrival at Mars
6
How can I calculate the future position of a satellite orbiting a central body as a function of time using known orbital elements?