Why does JWST have such a big Blind Spot?

The JWST’s field of regard excludes a significant portion of the celestial sphere in the anti-sun direction. See JWST field of regard (FOR) (source of the image below) Also see How much of the sky can the JWST see? 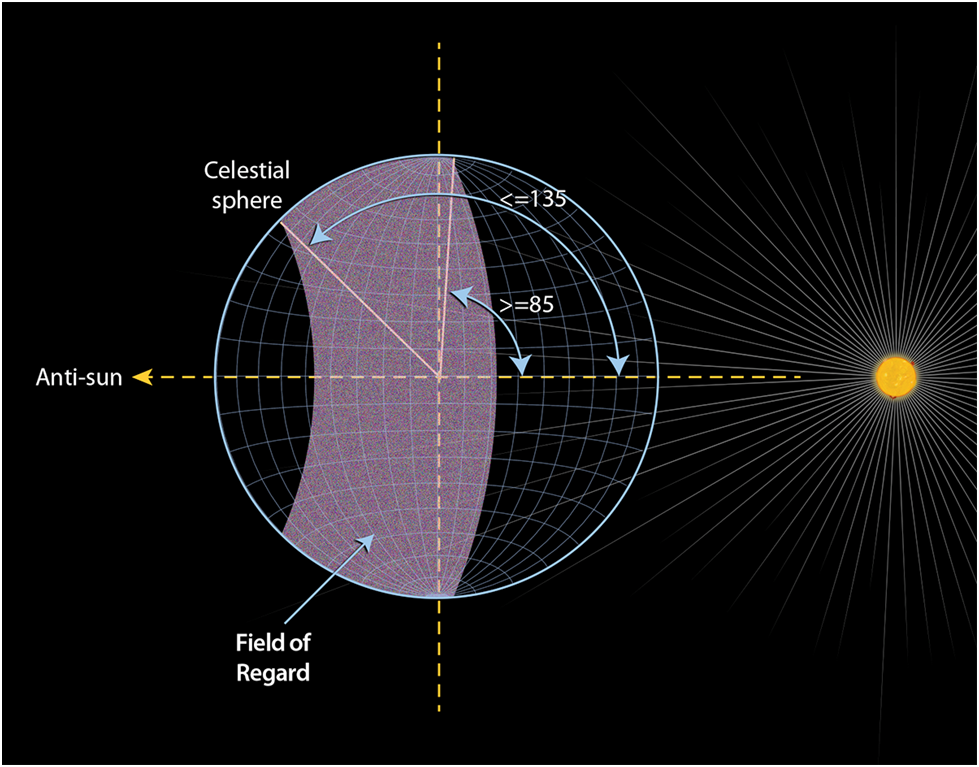 The spacecraft can’t pitch up to align the telescope boresight to within 45* of the anti-sun direction because the telescope would move out from behind the fixed sunshields. 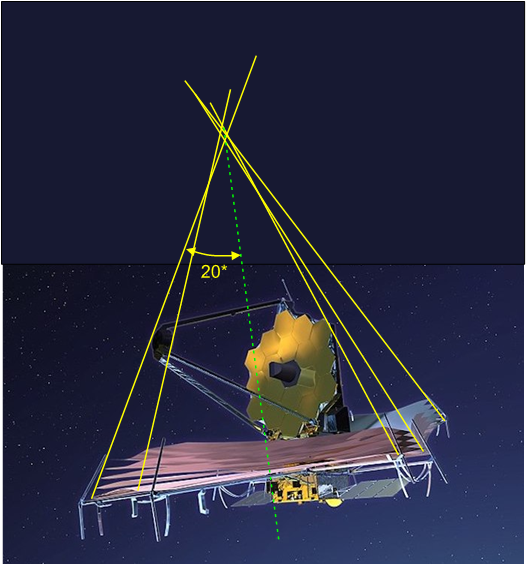 Observatory within “Penumbra” of sunshield

Over a 6 month half-orbit of the sun, the entire sky is observable. But what happens if an interesting event occurs in the “blind spot”? Like Shoemaker-Levy or the arrival of Rama? A gravitational wave event?

If the observatory and sunshield were articulated to move 22.5* with respect to each other, the entire celestial hemisphere would be included in the field of regard.

It is not necessary to violate the single, rigid structure of the observatory to point it in a different direction. It is only necessary to ensure it is shaded in the new direction. This could be done by re-designing the sun shield to provide more coverage. The increased coverage need not be in all axes. Adding another 25* of rotation in the V2 axis would extend the field of regard to the entire celestial hemisphere. This would have no effect on reaction wheels, fuel consumption, failure risk or lifespan

Was this capability not seen as a design priority? I can’t imagine it would be a technical challenge.

Why does JWST have such a big Blind Spot?

For near-all-sky performance behind that big sunshield, you'd need a much more complicated articulation mechanism.

Hubble gave us thirty years of science primarily between 100 and 800 nm (near UV to very near IR) and the new telescope will now cover a totally different wavelength range red to thermal IR (about 600 nm to 28 microns?) for a totally different set of astronomical observations.

The new telescope will look back in time by observing very distant and very strongly red-shifted objects from early in the universe's history.

It will also look at infrared light from closer objects at wavelengths we can't observe through Earth's atmosphere, including exoplanet phenomena among others.

None of these generally fall into the category of time-domain-astronomy. It's already worth every bit of its \$500 million \$9,700 million price tag.

Why that would be hard and expensive:

The infrared telescope needs constant, stable exposure to the "cold of space" to keep all its optics and instruments at a stable cold temperature.

That means it needs constant, stable and reliable complete shielding from the Sun.

The current observatory is a single rigid body. The telescope and sunshield move together. The sunshield is large enough to allow +/- 25° tilting with respect to the Sun-telescope axis (thus the 85° to 135°) and can rotate anywhere around that axis without any moving parts except its spinning internal reaction wheels and occasional use of its thrusters. It does this in part by literally leveraging the photon pressure from the Sun.

Once operational, it doesn't have to use any major moving parts. There is no telescope mount.

A design that could point to a much larger fraction of 4π would have to have some degree of mechanical separation between the shield part and the telescope part, so that they could be pointed independently.

But they couldn't be completely separated, the way that the observatory conserves precious fuel is by taking full advantage of the Sun's photon pressure on the sunshield to maintain its orbit and adjust its attitude and to do momentum unloading of its reaction wheels.

Adding a new articulation feature like this would have taken extra years and added substantially to its \$500 million \$9,700 million price tag.

It also may have been much harder to fit in the payload fairing of the rocket capable of holding this already-huge-when-folded observatory.

It also adds to the risk of failure or shorter life.

The obvious answer is: because it is not required.

The relevant requirements are given in the official Mission Requirement Document JWST-RQMT-00634, Oct 2007

Note that in a complex system engineering, a guiding principle called KISS (Keep It Stupid & Simple) is often used. This is because if a feature is added while it is not required by the mission, analyzing it for possible adverse interactions with other functions and documenting it, both take time (and money). Recall that the documentations must cover not only the design and implementation phases but also the future operational phases.

A valid and interesting question is in fact why this is not required by the scientific goals. @uhoh questions in Astronomy SE may provide useful insightful answers.

Not the answer you're looking for? Browse other questions tagged nasa observation james-webb-telescope or ask your own question.

9
How much of the sky can the JWST see?
8
Question: By design, JWST cannot observe in the anti-sun direction. Is this due to Gegenschein backscatter?
9
Is there any more information available on JWST's "aft momentum flap"
2
How can the proposed LUVOIR space telescope slew to different directions while keeping the sunshade in a fixed orientation? What compensates?

28
Does the JWST have a camera to monitor its deployment progress?
9
How much of the sky can the JWST see?
8
Why have JWST in a Sun-Earth L2 halo orbit?
4
Would it have been cheaper and/or faster to put a James Webb-like Space Telescope on a balloon instead of a rocket?
8
Question: By design, JWST cannot observe in the anti-sun direction. Is this due to Gegenschein backscatter?
13
Why is NASA choosing such a large “halo” orbit at L2 for JWST?
27
Is there any point in space that the James Webb Space Telescope would be unable to image?
10
Is JWST Halo orbit prograde or retrograde and why?
21
JWST - Why unfurl before reaching L2?