Why do rockets have multiple stages?

I guess, almost all the rockets have multiple stages. But, I was wondering, why do they have multiple stages? Couldn't they have just 1 stage? With more stages, they would require more engines (meaning more weight, which leads to slower acceleration). Instead, if there was only 1 stage, only 1 engine would be required, meaning less weight, leading to faster acceleration. Then why not use only 1 stage?

The basic reason: tossing an extra stage can be far, far, more of a mass-savings than trying to make one stage that can do everything.

There's a handful of reasons for this:

In short, it's more efficient to essentially build two different vehicles: an upper stage, which is optimized to fly in space as it accelerates the payload to the speed needed to stay in orbit, and a lower stage, which is optimized to throw the upper stage into a high suborbital orbit. With this philosophy, the weight savings from discarding the lower stage are always worth it.

Then why not use only 1 stage?

Because we don't know how to do that.

For a typical launch vehicle that initially is around 90% propellant by mass, this results in a maximum $\Delta v$ of about 2.3 times the exhaust velocity. Given that $\Delta v$ to low Earth orbit is about 11 km/sec (about 9.4 km/sec ignore drag and gravity losses, plus another 1.6 km/sec after accounting for this effects), a single stage to orbit rocket would need to have an exhaust velocity of about 4790 meters per second. There are no chemical rocket engines that have this high of an exhaust velocity.

There are some tricks to get around this limit. One is to do what jet airplanes do: Get the oxidizer from the atmosphere. This has been a pipe dream for many decades. Nobody knows how to do it. Another is to use side boosters that are discarded upon depletion. Some called the Space Shuttle a "one and a half" stages to orbit vehicle. This wasn't strictly true as the main engine cutoff occurred just below orbital velocity.

Yet another trick is to use a multistage vehicle. The first stage gets the vehicle most of the way toward the desired $\Delta v$ and altitude, the second stage either finishes the job or at least does a bit more. A side benefit of using a multistage approach is that the upper stages can use engines optimized for vacuum operations. A vacuum engine used at sea level most likely would tear itself apart. Given two nearly identical engines except that one is safe at sea level while the other is optimized for vacuum operations, the vacuum-optimized engine will inevitably have a higher exhaust velocity.

An extreme example a multistage vehicle was the Saturn V launch stack, which essentially was a six stage vehicle. Throwing away pieces of the vehicle after they're no longer needed is a way to partially escape the tyranny of the rocket equation.

Other answers address the core construct of the rocket equation with words and equations, but here it is visually:

Where the Y-axis is the $\Delta V$ and the X-axis is the propellant mass. $b$ is a slider variable for when to stage. The dry mass change at staging is scaled linearly with the amount of $\Delta V$ remaining until orbit (~$9500$ $m/s$), though it should be noted that real launch vehicles do better than this ratio.

You can play around with the interactive Desmos graph here.

Both 'stages' in this example have the same $I_{sp}$ but the ability of the two stage launcher to throw away some no longer needed dry mass is how the propellant (and thus mass) savings is realized.

Without getting deep into the weeds, it's because engines don't weigh much. A Falcon 9 rocket has 10 Merlin engines weighing a total of about 4.7 metric tons, with the full weight of the rocket being about 550 tons. So altogether less than 1% of the total rocket weight. The reason you might want to try and avoid more than 1 stage is because it adds on engineering complexity, additional failure points, and production cost considerations. From a weight perspective alone, however, the choice is pretty clear.

As @ChristopherJamesHuff points out in the comments, the second stage only adds on 1 additional engine. So for a very rough estimate we can just compare the weight of the engine to the weight we lose by ditching the empty first stage. The single engine weighs ~0.5 tons, and the empty 1st stage is ~25.5 tons, therefor it's a clearly beneficial tradeoff from that perspective alone.

The case for staging gets even better for >1 stage because engines can be optimized for where it is being used, which in practice means optimizing for the thick atmosphere found at sea level, or the near vacuum of space. A single stage rocket will always have at least some of its engines operating in non-optimal conditions.

Now, it is true that there are additional considerations and complexity that a multi-stage rocket brings, but they don't change the picture -- a single stage orbital rocket will always be made better by adding at least 1 stage absent a complete revolution in rocket design. The exact numbers will vary, but the weight added (additional engines, connecting parts, etc) will always be significantly less than the weight you dropped by letting the first stage go once the fuel is used up.

Finally, you might wonder why SpaceX stopped at 2 instead of a >3 stage rocket. That is because there are diminishing marginal returns from staging. Going from 1 stage to 2 gives you giant gains in efficiency and payload capacity that clearly outweigh the added engineering and production challenges, but the situation gets more murky as you add more stages.

The important point to consider here is the orbital height you want to reach and the payload mass. For LEO you can do with 1 stage (although not efficient) but for interplanetary missions (or even moon) you cannot have just 1 stage since you require a lot of fuel to go from ground all the way to the moon. This would greatly reduce the payload capacity, which is the main focus of any launch. You don't want to send just a rocket anywhere but also include some useful science experiments. And everything is built around this in rockets. The more payload it can carry, the better !

Also, single stage would not necessarily mean a single engine but would depend on the specific impulse of the engine and the structural index. The engines are also optimised for only one altitude and are not efficient when operating outside of this range, since the atmosphere is always changing during the ascent phase of the launch. When you have these two parameters, you can then go through iterations to find the best possible combination of specific impulse and structural index of each stage. 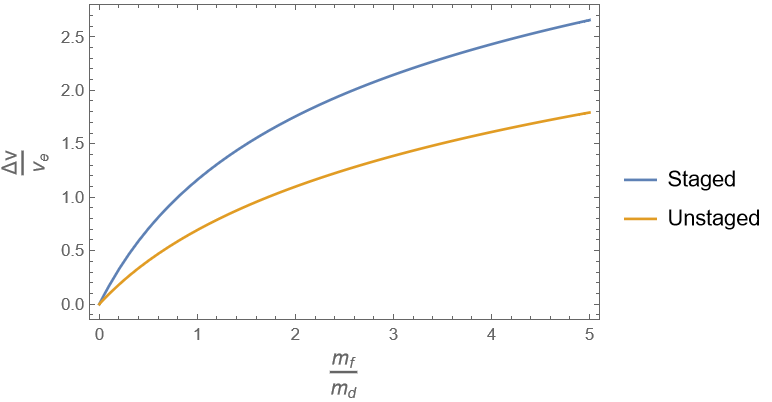 The big takeaway: a staged rocket can shed more dry mass and because $\Delta v$ greatly depends on final mass a staged rocket will have a fundamental advantage over a single stage rocket. It is important that as much time is spend thrusting with low mass because if you first burn $3m_f$ of fuel and then ditch $2m_d$ of staging you will not get a boost in fuel efficiency. There are also other factors that benefit staged rockets as mentioned in the other answers but this is still an important aspect

Not the answer you're looking for? Browse other questions tagged rockets stages acceleration or ask your own question.

26
Why do some rockets not ignite all their engines during liftoff? (GSLV MK3 LV)
17
Why is (conventional) ramjet not used for 2nd stage of rocket propulsion?
53
What technological breakthroughs were required to land booster stages?
4
Why haven’t upper stages used the RL-60 engine?
21
What would be necessary in order for us to achieve a single stage to orbit, reusable rocket?
4
Would there be any advantages for a rocket with two "half stages"?
1
Why use thrust control systems rather than fins?
10
Why aren’t rocket stages modular and interchangeable?
3
What size and shape is an SL-16 R/B and for how long will they orbit Earth?