Why does the moon’s transit appear so inclined in this STEREO-B video?

Question: Why does the moon’s transit appear so inclined in this STEREO-B video?

This video of the Moon transiting the Sun on Feb 25 2007 is from STEREO-B during its solar orbital insertion.

5.14+7.25 is a long way from 24. I assume the discrepancy is because the point of view is moving, but I can’t picture the relative motion.

By the Sun’s rotation, North is up. The waxing gibbous Moon is moving to the right. STEREO-B is moving to the left. Wouldn’t Stereo-B’s motion make the transit appear less inclined, rather than more?

We're looking at two moving objects from a moving platform. Over the timespan from 2007-Feb-25 7:30 to 2007-Feb-25 18:00, the Moon's ecliptic latitude is changing faster than its ecliptic longitude. But we also need to subtract the Sun's movement to account for the effect shown in those video frames.

Here are a couple of diagrams produced using JPL Horizons, using a 30 minute time step. The Sun is red, the Moon is blue. The small dots show the positions, the large circles show the positions and apparent angular sizes of the bodies at the start and end of the time period. 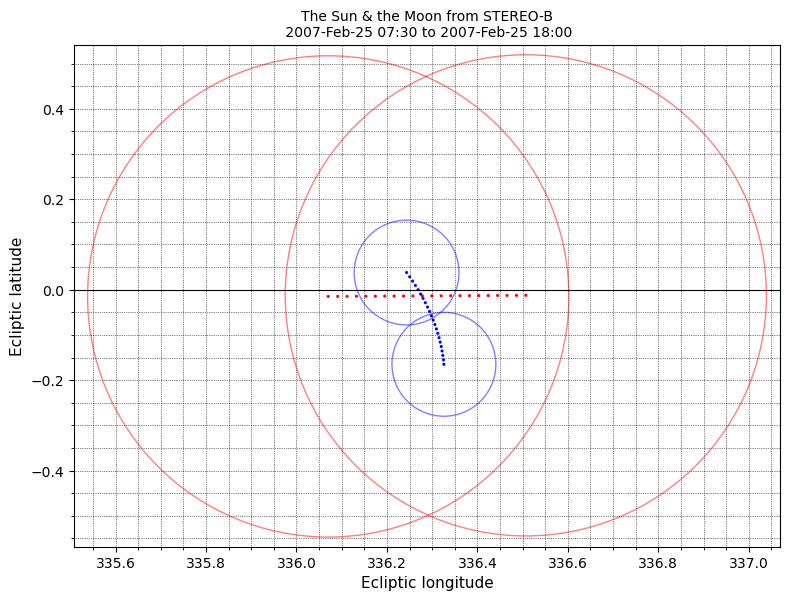 The Moon is moving up & to the left, the Sun is moving to the right. Note that the Moon's path is even steeper than what the video shows. We're using an equirectangular projection of the celestial sphere, but the angular size of the viewing region is small, so the inevitable distortion is small.

If we subtract the Sun's motion, we get this: 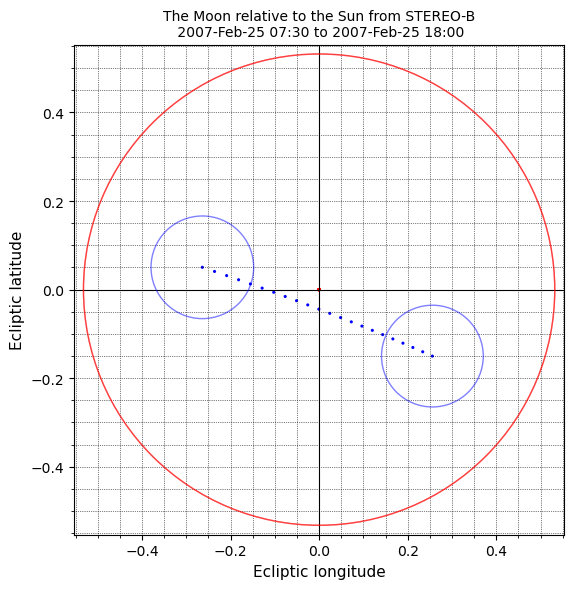 The changes in ecliptic longitude and latitude, in arc-minutes, are:

Incidentally, the Moon was moving on a fairly curved trajectory (relative to STEREO-B) around that time. 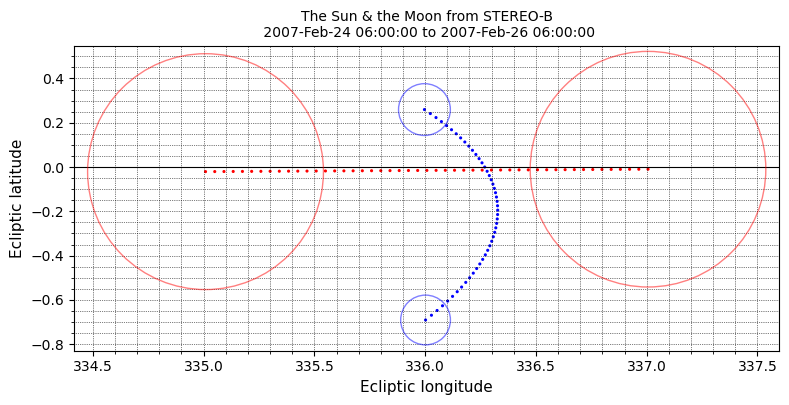 Here's a link to the Sage / Python script I used to make the static plots.

Not the answer you're looking for? Browse other questions tagged orbital-mechanics solar-eclipse stereo-mission or ask your own question.

0
Does the arrow in this STEREO trajectory animation point heliocentric prograde, or towards the Sun?

26
Why does the ISS track appear to be sinusoidal?
9
Why do the LRO's orbital elements appear to constantly oscillate - except recently?
8
What are the "Moon L, B, C" angles shown in this solar eclipse simulation?
33
Why does this plot show Starman's speed relative to the Sun fluctuating so often?
2
Why does Earth not appear to be at the focus of TESS' elliptical orbit in this video?
10
How does the ISS Transit Finder website get the position of the ISS so accurately?
0
Does the arrow in this STEREO trajectory animation point heliocentric prograde, or towards the Sun?
1
Why does this satellite collision debris field look like a big "X"?
8
Why does Himawari-8 have problems with the Sun from 19th February to 19th April?
12
Why did a solar eclipse of the sun as seen from Apollo 11 appear to have an elliptical corona?