What antennas does JAXA use to communicate with its deep space spacecraft? Does it have a deep space network of its own?

@BrendanLuke's answer to Are there currently any spacecraft in orbit around Venus that might (or might not) be at risk of meteoric dust from comet Leonard C/2021 A? alludes to the exciting story of Akatsuki's near complete loss of mission and amazing recovery.

Following the initial failure, communication with the safe-moded spacecraft was via it's low gain antenna, which would have required a substantial antenna on Earth.

Question: What antennas does JAXA use to communicate with its deep space spacecraft? Does it have a deep space network of its own? Does it use a mix of domestic dishes and those of other space agencies?

Note 1: Akatsuki's story is background only, I'm asking about all of JAXA's wide-ranging deep space program. There's a short and not guarnanteed-to-be-complete list here.

This section is empty. You can help by adding to it. (January 2020)

Question: What antennas does JAXA use to communicate with its deep space spacecraft?

(and mentioned in the comments to the question above)

Usuda Deep Space Center was founded to transmit operation commands to deep-space explorers and to receive observation data from explorers.

The location was chosen for its environment to receive faint signals from explorers at great distances with less jamming such as city noise.

The center has been in operation since October 1984.

The large parabolic antenna, the core component of the facility, has a 64m-diameter reflector and weighs 1,980 tons in total.

The center also has a 10m-diameter antenna and a transmitting/receiving system to retrieve VLBI (Very Long Baseline Interferometry) observation data.

Question: Does it have a deep space network of its own?

The Center conducts command transmission operations to deep space probes and receives observation data from them as they fly closer to satellites, planets, comets, and the moon.

X-band and S-band radio waves are used for communicating with space probes. K-band will also be used in the future.

Usada.. was used to communicate with Japan’s first two interplanetary space probes, Sakigake and Suisei, which were launched to study Halley’s Comet in 1985.

The antenna has since handled communications with the asteroid probe Hayabusa and other deep-space probes.

It is now being used to communicate with the Venus probe Akatsuki and the asteroid probe Hayabusa 2.

Similar huge antennas are used by the deep space networks of the USA, China, Russia, Europe, and India.

As also mentioned in the comments:

Because the 64 meter antenna is aging, JAXA is building a new antenna nearby. This new antenna, called GREAT (Ground Station for Deep Space Exploration and Telecommunication), also known as Misasa Deep Space Station will be slightly smaller (54 meters in diameter) but have better surface accuracy and hence be capable of working at the higher Ka-band frequencies.

To secure operational capacity for JAXA to independently achieve innovative results from deep space exploration by newly enabling the receiving of Ka-band while continuing to cope with X-band communication, which has been used for a long time for deep space missions. 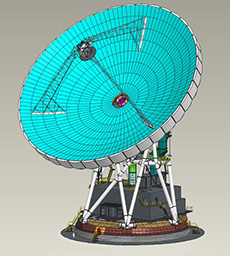 (The other tracking stations: Okinawa, Masuda, and Katsuura are for satellite tracking and control)

Question: Does it use a mix of domestic dishes and those of other space agencies?

In addition to the Center, a similar large antenna for tracking and controlling space probes is possessed by other overseas space organizations including NASA of the U.S.A. and ESA of Europe.

The Deep Space Network provided communication and tracking services to Akatsuki through its 34 meter antennas. 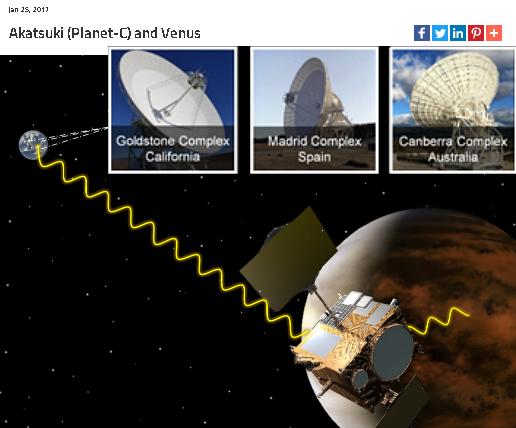 Like other outstandingly successful deep-space missions before and after, the Voyager Mission to Jupiter, Saturn, Uranus, and Neptune and their moons and rings depended on the unique capabilities of the DSN, including the capability of arraying with non-DSN facilities at Parkes (Australia), the VLA (New Mexico), and Usuda (Japan).

Misasa Deep Space Station (MDSS)... will operate at X-band (8.4 GHz) and Ka- band (32 GHz). As part of ongoing joint support of deep space missions amongst JAXA, ESA, and NASA, ...are developing a united multi-agency effort to improve the X/Ka celestial reference frame as well as a unified X/Ka terrestrial frame to be shared by the three agencies.

The Misasa 54-m antenna enhances X/Ka sensitivity by virtue of having an aperture area 2.5 times larger than the NASA and ESA antennas in the network.

Misasa improves the network geometry by providing four new baselines including the first direct north-south baseline (Japan-Australia) in the X/Ka VLBI network which will provide optimal geometry for improving declinations. 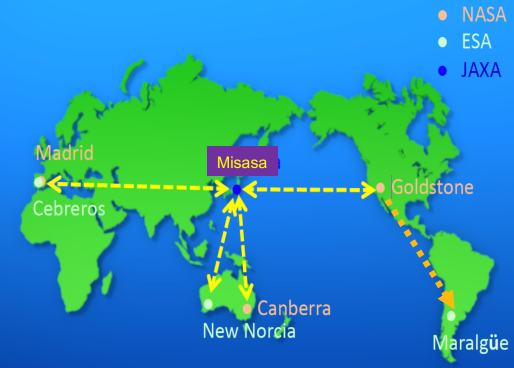 Not the answer you're looking for? Browse other questions tagged radio-communication deep-space antenna ground-station jaxa or ask your own question.

1
Are there currently any spacecraft in orbit around Venus that might (or might not) be at risk of meteoric dust from comet Leonard C/2021 A?

21
How precise must be the antenna orientation to communicate with a deep space probe?
2
Will there be "Near Space" Ka-band allocations for TESS?
1
What is the highest non-optical frequency used or tested for use in deep space communication?
7
Deep Space Network time budgets per spacecraft - is such statistics available?
1
If a MarCO-type CubeSat were in orbit around Bennu, what kind of power would it need to communicate with the Deep Space Network?
1
Does a deep space network benefit by having a diversity of latitudes?
3
Which deep space spacecraft had main dish antennas that were perforated or made from mesh?
3
What is a Beam Waveguide dish and why do deep space communications stations use them?
3
When the Mars 2020 and Mars Science Laboratory missions were in deep space, what antennas did they have available to communicate with Earth?
5
Have solid dish antennas on deep space spacecraft (as opposed to meshes) ever provided any other helpful function? As meteor shields perhaps?