Why doesn't James Webb have a larger supply of thruster propellant?

Reading Wikipedia's article on the James Webb telescope, I'm struck by the following information. I don't understand how it arose as an optimal and/or preferred mission choice.

So,JW is in an unstable orbit at Lagrange L2. Unlike many other missions, which can last decades longer than planned because their main need is low level electrical power, JW also needs thruster fuel to regularly ensure it stays in its designated position.

The telescope's nominal mission time is five years, with a goal of ten years .... after a 6-month commissioning phase. JWST needs to use propellant to maintain its halo orbit around L2, which provides an upper limit to its designed lifetime, and it is being designed to carry enough for ten years.

Other flagship missions have spectacularly outlived their planned missions.

Even allowing that some of these past "planned" missions may have been durations for primary mission only, with an extension expected, the overall impression is that missions can outlast and outperform their original planned duration, and be repeatedly extended thereafter, because of their value once deployed.

But JW was deployed with a single and absolute limitation point - its thruster fuel supply, which means that however successful, its duration is limited to apparently 10 years. Not long at all, for NASA's current flagship project, and one that judging by Hubble could still be valuable and quite possibly still working fine, in 20 or 30 years.

Assuming that halo orbit corrections occur at a relatively constant rate, it would have only taken another 274kg to build in capacity for an entire second decade. Around 4.2% total payload increase, for a doubling of viable mission time - and many missions have been valuable after 10 years, one may assume JW would also be. Also new or successor $10bn projects are not readily flicked into space on whim, or on short timescales, and are subject to political uncertainty, so there's a time, opportunity, and cost incentive, to make as much as possible from this one.

I don't imagine the current launch strains Ariane 5 so much that an extra 100 - 300kg was completely non viable.

Even if it did, the payoff of any extra months or years must surely be huge and I'd expect it to have been preferable to find a telescope mass, or launch fuel, saving in some other area - a small reduction in some other component, in exchange for doubling of mission outside time.

But despite all this, they decided not to.

I suspect that the culprit is the MIRI instrument.

Of all the scientific instruments of JWST, this is the only one for which passive cooling is not enough. Active cooling requires equipment with moving parts. AFAIK, it was one of the key technological risks and challenges encountered in the program, and correspondingly, if overcome satisfactorily, one that contributes to make the JWST unique as a space telescope, one that arguably allows JWST to look further than any past telescope into the past of the Universe.

The question then is, if they lose the MIRI after 10 years (10.5 years after launch) would it be worth to add some fuel for future possible extensions for the remainder of the scientific goals?

This is not easy to answer for me, but looking at the required man-power projected in the latest GAO's report (Fig. 5) 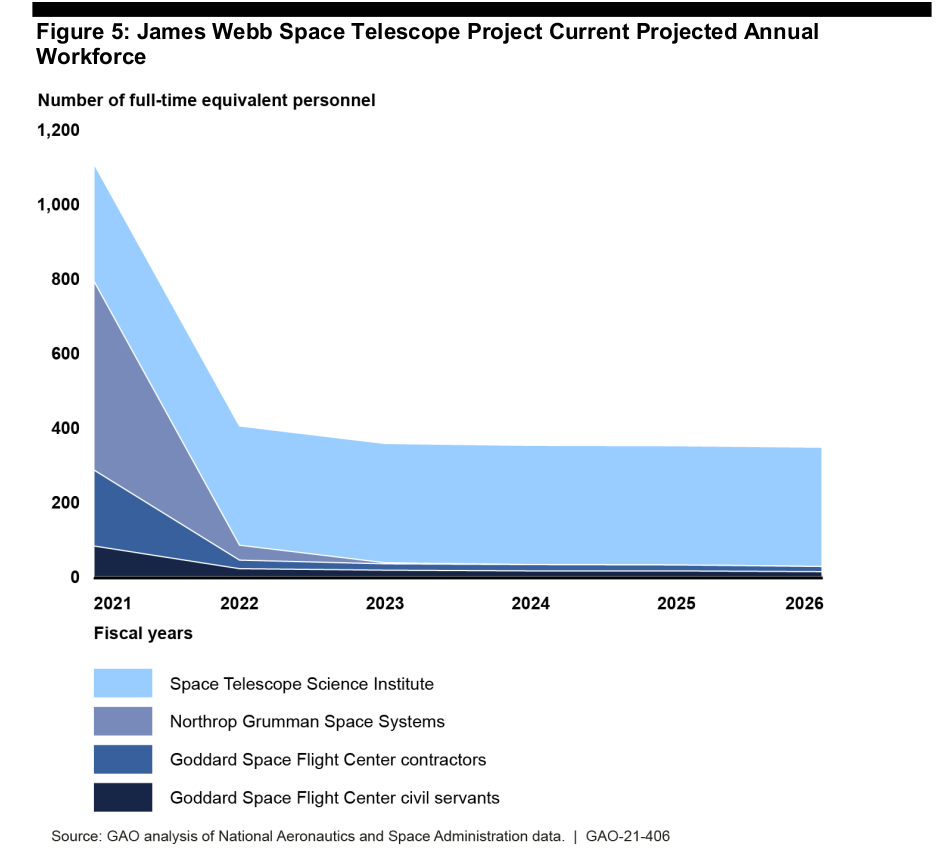 I would say that, it would be more clever, politically, to "hide the margin" than to publicize right now (e.g. by proposing to add more fuel) the possibility of "extended use". Let's not forget that, of these 274 Kg of fuel, the budgeted annual in-orbit consumption can be as little as 1.3% (2m/s of Delta-v out of the 150 m/s total). For details see Dichmann et. al. (2014) Station-keeping Monte-Carlo simulation for JWST

There's already great answers on the technical side, but it might also be useful to note what the JWST was supposed to be, as the original designs were much different than what we ended up with. The 90's were a period where NASA's goal was to be "faster, better, cheaper", which is extremely ironic given that many have lamented the development of it as a never ending series of disasters which "ate astronomy" (https://www.nature.com/news/2010/101027/pdf/4671028a.pdf).

The project was conceived in 1996, estimated at $500 million USD, and was initially planned for a 2007 launch. It ended up costing ~19x more than estimated and took ~2.3x longer than expected (assuming it launches at the end of '21). (https://en.wikipedia.org/wiki/James_Webb_Space_Telescope#History)

In that light, even though 10 years seems like a short life-span, it makes a lot more sense when viewed from the perspective of the initial planners. Again, this was when they thought it would be fast and cheap; it doesn't need to last like the Hubble because it was thought we'd be tossing equivalent sorts of projects up left and right. You might compare the initial conception of JWST to the Spitzer (5 year planned primary mission). Do a job well and quickly move onto the next thing.

Now, if the initial designers knew in advance what the project would become, obviously things would have been different. And of course there were modifications to the plans made along the way. But as other answers point out, to extend the life would require many different changes and prolong the project even longer. At some point you need to go ahead with a plan. There will always be seemingly good justifications for changing something but then you don't end up with anything.

Finally, it should be said that while there were many, many hiccups along the way, if all goes to plan it will be an amazing piece of science!

3
How to convert bi-propellant fuel into Delta-v (for ex., for JWST)
7
How much does JWST actually weigh?

22
Is it possible to refuel the James Webb Space Telescope?
5
Will WFIRST and JWST be able to resolve each other?
19
James Webb telescope; limits to propellant lifetime?
9
The design of the halo orbit of the James Webb Space Telescope
41
If we can get people to the moon and back, why are we so adamant that it's impossible to service James Webb at 4x that with a one way robotic vehicle?
6
What will happen to JWST after its 10 year mission?
5
How much fuel did JWST save due to an accurate launch, and how much will remain after L2 orbit?
6
Question: Does JWST have hardware that could be used as a docking fixture by repair spacecraft?