Could Curiosity dig itself a burrow?

Could Curiosity dig itself a burrow? 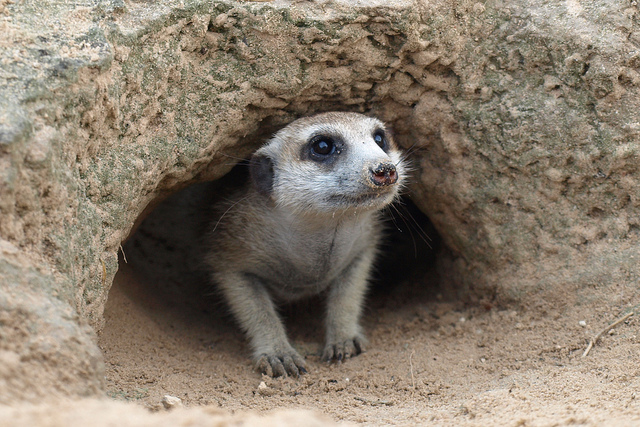 How long would that take? What would be the technique for that? Has it already seen a soil good for that?

Curiosity doesn't do anything with speed. By my timing, it takes Curiosity one or two minutes just to scoop up one scoop of fine Martian regolith. After scooping this tiny bit of material, Curiosity would then have to move a bit, call it two meters, to dump the contents away from the burrow. At 30 meters per hour, the Curiosity rover is not a race horse. The process per scoop would take five to ten minutes. At a 365/247/7 pace, a million scoops would mean Curiosity would need at least a decade or two to accomplish this task. Since the Curiosity rover doesn't have lights, so that means doubling the time, call it two decades, minimum. Curiosity's generator will die in fourteen years or so. It can't be done.

It probably could, but with its wheels, not with the drill on its robotic arm. But why would it do that? The Curiosity rover has independent drive on all six of its wheels so technically all it would have to do is find a soft enough ground, lock the rest of its wheels and dig a hole with one or two of its front or rear wheels that also have individual steering motors. Check e.g. Five Things About NASA's Mars Curiosity Rover article in Mars Science Laboratory Mission News:

Big Wheels: Each of Curiosity's six wheels has an independent drive motor. The two front and two rear wheels also have individual steering motors. This steering allows the rover to make 360-degree turns in-place on the Mars surface. The wheels' diameter is double the wheel diameter on Spirit and Opportunity, which will help Curiosity roll over obstacles up to 75 centimeters (30 inches) high.

With its drill it would probably take ages though since we're talking of a few inches deep holes at a time, and you'd lose ability to drill precisely enough anyway since the MAHLI (Mars Hand Lens Imager) cam couldn't see what the rover is doing with its robotic arm until the hole drilled would be wide enough. So I'd rule that option out as infeasible.

As far as digging with wheels is concerned though, similar has actually happened to the Spirit rover (aka MER-A, Mars Exploration Rover A) as it unwittingly locked its wheels into the sandy pit but managed to break free after many attempts during what was then nicknamed the Free Spirit campaign:

So yes, I think Curiosity could dig itself a burrow if its mission planners really wanted it to. It would have to find some terrain with locked dry ice and/or water ice in it first so the soil it would dig into would have some adhesive properties yet still be soft enough to allow some progress in digging without constant caving in and the walls around the burrow collapsing, and it would have to run over excavated materials back and forth to compact them with its weight, but it's not out of the realm of possibility, if a bit on the vivid imagination side of it.

It would probably be a lot easier simply finding a naturally occurring burrow, like perhaps a collapsed lava tube, wind eroded part of a soft rock or a hole that used to be occupied by dry ice that became surface exposed and evaporated, sometimes explosively so in what are known as dry ice fans and become seasonally active during the Martian springs.

No. It can scoop up only 1 to 30 cubic centimeters of soil at a time. It has done so only few times during its two years on Mars. By locking some of the wheels while driving it can make some marks on the ground. It's not really a caterpillar.

Not the answer you're looking for? Browse other questions tagged mars curiosity construction habitat or ask your own question.