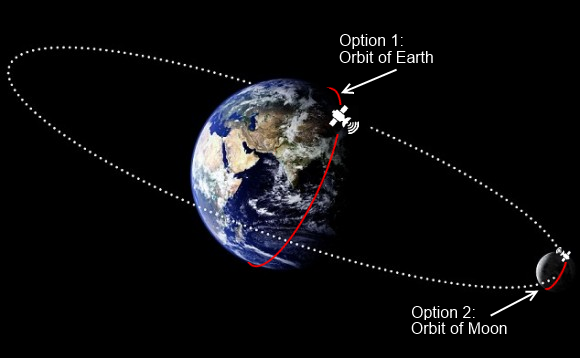 14
Why would Sun-synchronous orbits be impossible around perfectly spherical bodies?

16
Can communication satellites be used in lunar orbit?
10
Is a lunar Sun-synchronous orbit possible at the "frozen" inclination of 86°?
3
How do polar satellites disrupt communications between GEO satellites and ground control?
6
Could a (differently) inclined orbit remain above a Lunar pole half of every revolution?
31
What does the Sun-Earth-Moon system look like from the Sun-Earth L-2 point?
11
What (actually) makes Iridium "the world's only truly global mobile satellite communications company"?
4
Could a radio telescope orbit Earth-Moon L2 so that it is in the Moon's radio shadow?
7
How could a satellite follow earth around the sun while staying outside of earth's orbit?
2
Understanding line of sight between two satellite with oblate Earth using "scaling k-component"
4
Why are the poles of the Moon in Google Earth so different from other regions?