Did the tail of Siding Spring distort communication between Mars, and Earth?

This article writes to say

There was an hour’s communication blackout during the comet’s fly-by ...

What happened here? Did the tail of Siding Spring serve to block/distort communication between Mars, and Earth?

Communications blackout was because they phased orbits of Mars orbiters to be "behind Mars" when at greatest risk of cometary dust impacts. MOM phased its orbit too and so did NASA's / ESA's Mars orbiters. Depending on their orbit, this communications blackout should last roughly 40 minutes. With MOM's highly elliptical and over three Earth days long (nearly 3 Martian days) orbit, I wouldn't be too surprised if its time "behind Mars" was a bit longer than that.

The comet's nucleus will miss Mars by about 82,000 miles (132,000 kilometers), shedding material hurtling at about 35 miles (56 kilometers) per second, relative to Mars and Mars-orbiting spacecraft. At that velocity, even the smallest particle -- estimated to be about one-fiftieth of an inch (half a millimeter) across -- could cause significant damage to a spacecraft.

So that's over Solar system's escape velocity at Martian orbital altitude and adding particles' velocity to orbiters' own orbital speed even the tiniest particles would carry huge kinetic potential ($E_\text{k} =\tfrac{1}{2} mv^2$, notice the square of velocity $v$) and it was simply more prudent to employ a few simple and affordable measures than risk it. Phasing orbits was one of threat mitigation options and they took it.

A slide on spacecraft mitigation plans shared during the CIOC (Coordinated Investigations Of Comets) Comet Siding Spring and Its Close Approach to Mars: Observer's Workshop, August 15, 2014, during the Session 1: Setting the Stage; Spacecraft Observations

NASA dubbed this "Duck & Cover" on social media, but it's just one of the risk management options really. 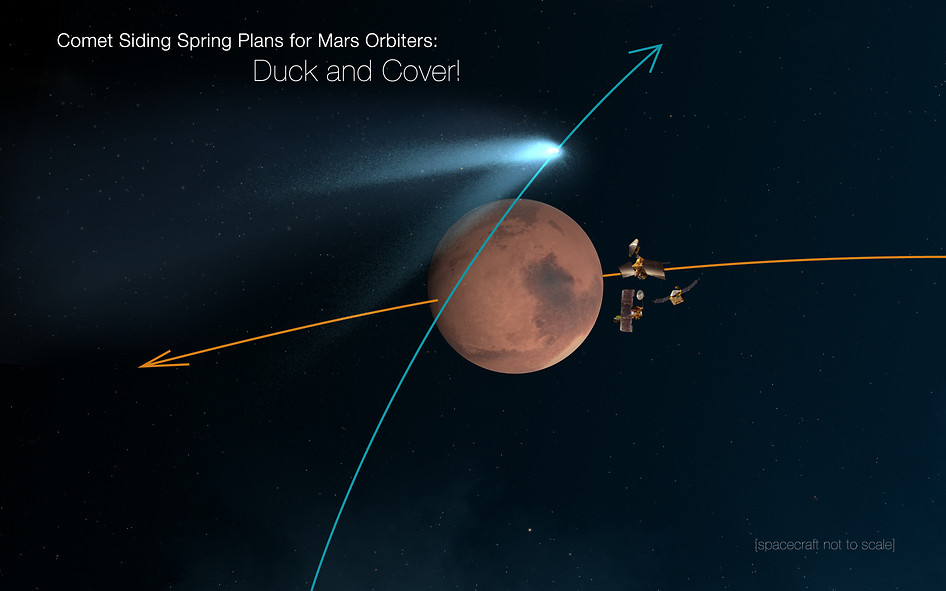 You can read a bit more in a related thread What risk management options are available for Mars orbiters and rovers to mitigate threat of impacting with Siding Spring cometary debris?

Not the answer you're looking for? Browse other questions tagged communication comet mars-orbiter-mission risk-management maven or ask your own question.

12
What risk management options are available for Mars orbiters and rovers to mitigate threat of impacting with Siding Spring cometary debris?
2
Just how huge is Mars' cloud of hydrogen?

7
Approximately how much fuel will ISRO Mars Orbiter have available when it enter Mars' orbit?
6
Was the ISRO Mars mission really scaled down?
12
What risk management options are available for Mars orbiters and rovers to mitigate threat of impacting with Siding Spring cometary debris?
8
Is long range radio communication possible on the lunar surface?
4
Do meteor showers from 209P/LINEAR cometary debris pose a threat to the ISS and other Earth-orbiting satellites?
8
Is there a means to communicate with robots on/around Mars whilst the Sun is between Mars & Earth?
3
Earth-Mars Radio Blackout: Is it possible to define an extended solar radius to solve this as a geometric problem?
17
How hard is it to fly through the tail of a comet? Has it been done?