What would determine the interior temperature of a large space station?

If one calculates the black-body temperature of an object in space, it turns out that it would be at room temperature somewhere between the orbits of Earth and Venus. But due to the greenhouse effect, Earth is warmer than expected from the calculated black-body value, which is around the freezing point of water.

But what heating would a hypothetical large space station get for free from the sun? The space-station-within an asteroid design or even one based on a dark metal hull would seem to bow to the black-body law. But how about e.g. the O'Neill cylinder pictured below? It must receive most of its heating from the sun, yet I somehow don't expect the math for "greenhouse earth" to work here. 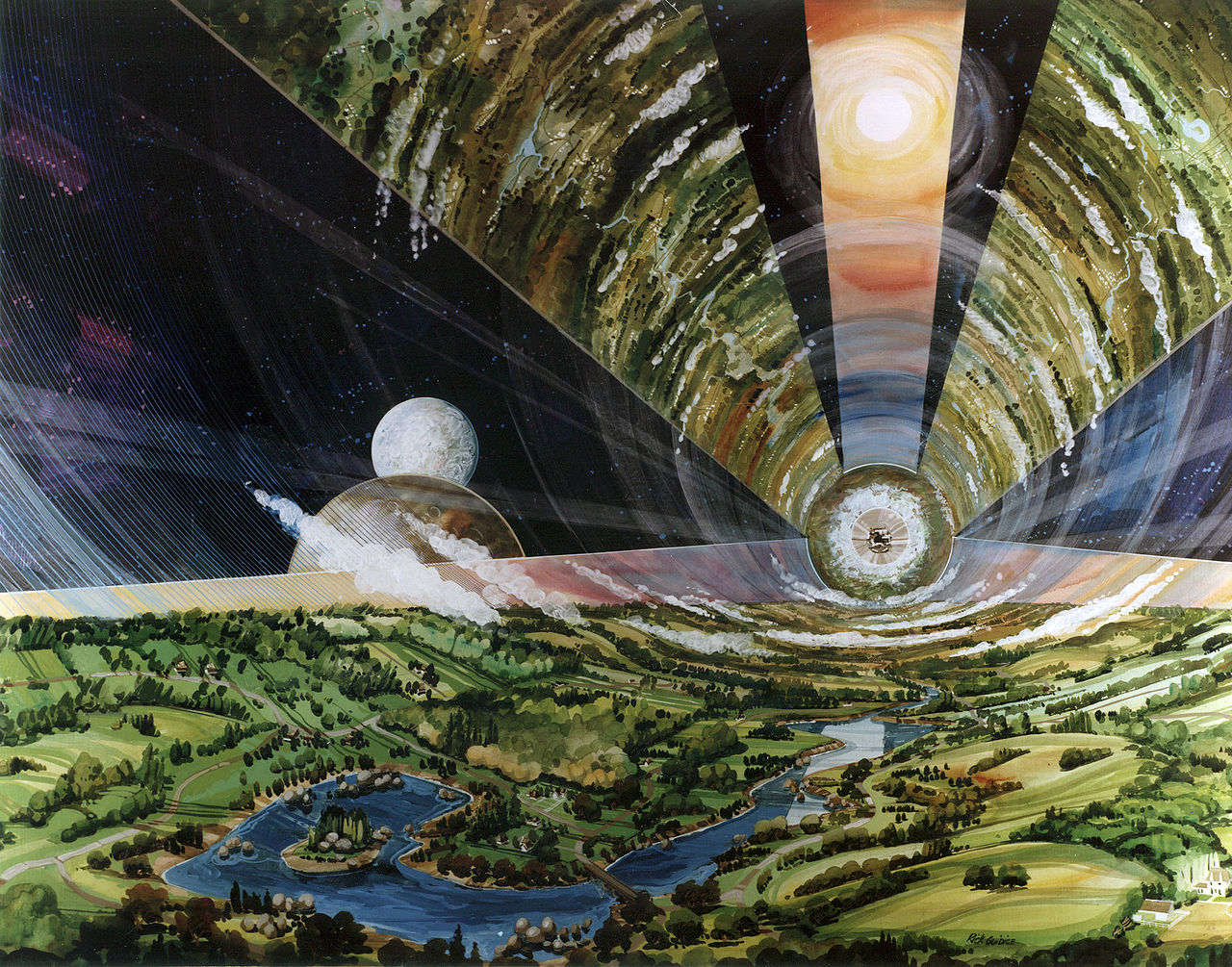 As with any satellite, the problem is more one of overheating than of freezing. A black body takes up a lot of heat, but it also radiates a lot. Other materials, like solar panels, radiate a lot less.

This phenomenon is called gray body radiation, and I have explained it here:

In order to keep the station at bearable temperatures, the exterior will have to use radiating surfaces like the ones of the ISS. These can be directed to the sun or perpendicular to its rays depending on the current need for cooling.

As with all technology, the simpler, the better. If possible, one would stick to such passive methods. If not, there are also means like coolant circulations, that would give a designer much more control over the temperatures in different parts of the station. However, it also adds a lot of components that may fail, which is something you want to avoid.

Edit: In your comment, you added that the station would be 50/50 "glass" and "metal", and asked for an equilibrium temperature "somewhere outside the orbit of Venus".

All of these are problematic definitions. But even if they weren't that is not how spacecraft design works. You don't pick some materials and see what temperature comes out, and declare the spacecraft impossible if it didn't match your expectations.

You decide on a temperature and then select materials accordingly. Somewhere around earth's orbit you have 1370 W/m² of thermal energy at your disposal. With that you can generate any temperature from freezing cold to scorching hot, depending on your heat management.

Black body radiation cannot be used in modelling this because the station is not going to be in thermal equilibrium. Something that size is going to have complex heat dynamics within it. What applies is non-equilibrium thermodynamics, which is so messy many natural systems are still beyond our capacity to analyze. Fortunately, space stations are floating in a vacuum far from other objects, and thus are receiving heat purely as radiation from one direction - the sun - and not losing it by conduction or convection.

If the sun's radiation on the surface of the station was immediately distributed evenly throughout its entire mass as heat, then black body calculations would apply. But that is not what will happen. The radiation that falls on it will partly be absorbed as heat, and that heat will slowly be conducted through the materials of the station, at different rates depending on the materials involved, and once it meets a gas or a fluid, also by convection. At the same time, heat is also being radiated by the station's surface. The key thing here is that conduction and convection happen at a snail's pace compared to radiation. The closest comparison that can be made between the speed of radiation (the speed of light) and the speed of conduction, is thermal diffusivity, which is measured in m2/s. The fastest rate for a natural material is that of graphite (or any of its carbon lattice cousins, such as diamond or graphene), at a rate of 1.22 x 10-3 m2/s.

Let's leave aside convection and consider just conduction, since most mass will be solid and it is easier to think about. Let's imagine the cylindrical space station pictured above with its long axis at right angles to the sun. Conduction occurs in all directions throughout a material, and its rate increases with difference in temperature across a given distance. So, near the surface of the side of the station in the sun, heat is passing both inward and outward faster than it is a meter from the surface. But throughout the volume, half of all heat is passing in a net direction towards the sun-ward surface, and half is passing in a net direction inwards, away from it. Of the half that is moving towards the surface, the farther it is away from that surface, the longer it takes to get there. Thus heat is being delivered to the station surface by the sun much faster than it is being delivered by conduction from the station interior, and the net heat flow is emphatically inwards.

On the other side of the station, out of the sun, heat is arriving by conduction and being radiated away, but because the rate at which it arrives by conduction is slow, the radiation is slow. If it were to conduct heat away as quickly as the sun is delivering heat on the other side, it would need to be as bright over its whole radiative area in the infra-red spectrum as the sun is over its area at that distance. It will not be. In fact, as it cools down because it is radiating heat away, it will radiate heat more slowly than it did when it first rotated out of the sun's rays. The heat gradient across the volume of the material there will decrease as it cools and heat will therefore pass across it more slowly.

Consider an example to get a sense of how much difference this makes. The heat that is conducted and convected from the interior of the Earth to its surface is still partly composed of the heat generated during its formation, 4.5 billion years ago.

To simplify your calculation you can consider the entire opaque mass of your hypothetical space station to be one material, for instance material from a stony asteroid. It might take some doing, but you can probably find the figures for the thermal conductivity and specific heat capacity of such material. You will need these properties for glass too.

You will need to know how much of it, in mass and volume, will be on the side facing the sun, on average. Basically it is a tube with half of its surface taken up by glass, and half by the stony material, so on average half of the side facing the sun will be the one material, and half the other. So figure what the volume, surface area, and mass would be of a quarter-tube of each material with the length, arc, and thickness you envision.

Then you need to consider how much of the incident light on the station's sun-ward face will be absorbed as heat, so you'll need to know the albedo of the stony material, and the reflectivity of the glass. And with the configuration shown in the example image, some light is going to enter the station and heat the air and the opaque solid masses it falls on, and some is going to pass right through the glass on the other side, so there's another confounding factor.

This is why when complex engineering is done, scale models and prototypes are made and tested. It would take quite a bit of doing to properly test a small scale model of such a station in order to approximately determine its thermal characteristics, and the result would be of limited usefulness. My guess is if a large space station were under construction, the builders would simply put in more radiative cooling capacity than they thought they would ever need, and then deploy it however worked best to get the desired temperature.

Assuming the long axis of the station is perpendicular to the sun, take the area of its cross section and multiply this by the W/m² of solar energy at the distance of its orbit. Presumably this is near Earth orbit, so it would be about 1370 W/m². Then apply half that energy to the stony material. The glass is problematic because of all the different places light hitting it ends up, you are going to need to estimate a percentage that is absorbed. It becomes a big fudge factor. But really, the result of all this calculation is something engineers might use to place some parameters on working designs, and can be taken in that spirit. Knowing the thermal properties of the materials you can determine how much of the incident radiation will be absorbed as heat over a given unit of time, and how much this will change the temperature of the mass overall. You will need to know the temperature on the outside surface of the material when it enters shade, and what the gradient across the thickness of the material will be, being the difference between the temperature on the inside of the station (posit a comfortable living temperature) and the temperature on the outside after its time in the sun. That will let you calculate how quickly it will lose heat. But compared to the rate at which it will be absorbing heat, this will be slow enough that it is not a big factor - until the station gets hot enough the two radiative figures balance, at a temperature far too hot for life.

Now you can start to consider how much extra heat radiating capacity will be needed to keep the station at a comfortable temperature.

53
Why is gold used in space technology to protect from heat radiation?
12
Radial variation of atmospheric pressure in rotating O'Neill cylinder-like ship? (Rendezvous with Rama)

17
Feasibility: self-sustaining colony on Mars vs. Space Station
17
How much temperature control would an EVA suit on Mars need?
4
How would one go about plumbing in a large space outpost?
4
What's the average temperature on the surface of ISS (International Space Station)
4
How can I determine if a rotating space station is stable
8
Practicalities of docking with a large spinning space station
9
How do space blankets (thermal blankets) work?