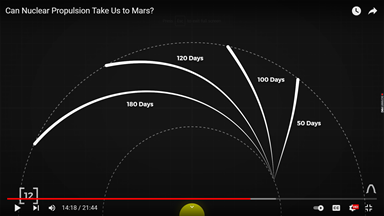 I was watching a video that displayed how the time to get to Mars varied with the production of varying delta-v and was looking for the mathematics behind such a calculation. Here is the link to the video:

Can Nuclear propulsion take us to Mars?

We can make some high-level assumptions to understand the approximate time taken to reach Mars orbit as a function of the delta-v applied at Earth.

First, we will assume that the orbits of Earth and Mars are both perfectly circular and co-planar. The assumed properties of each orbit is given in the table below: 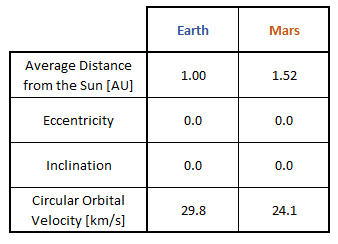 We can then consider a simple model since we are interested in approximate numbers: A purely impulsive delta-v is applied at some point from the Earth orbit in the velocity direction which will put our spacecraft on a Mars crossing trajectory. We then want to obtain the time taken following the application of the impulsive delta-v to cross Mars' orbit around the sun. 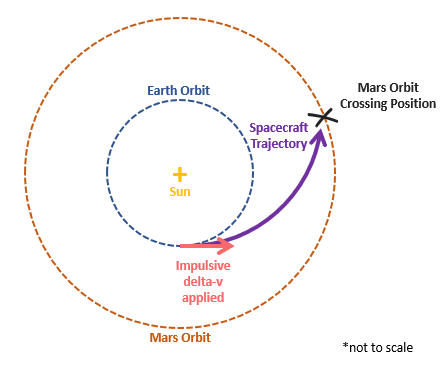 Note that for this simple model we will forget about the phasing of the Earth departure and Mars arrival and will assume that the timing of the transfer will be selected to ensure Mars is at the crossing point at the same time as the spacecraft.

We then need to calculate the time to reach the crossing position as a function of delta-v applied. The steps to do this are roughly as follows:

Using these steps you can create a plot showing time of flight as a function of delta-v applied. 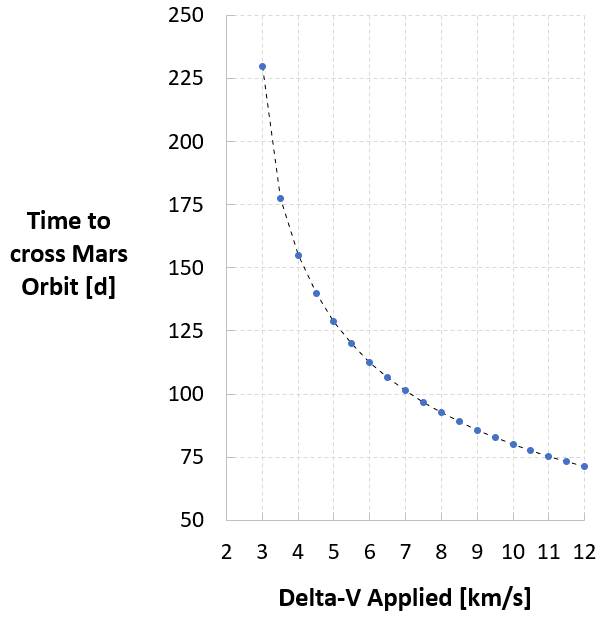 Again, this is only a simple analysis to get some rough numbers. The scenario described is not realistic since the orbits of Earth and Mars are not perfectly spherical and co-planar. However, hopefully this helps enough to give some approximate values and some insight into how these numbers can be analytically obtained.

To get more accurate picture you can look into obtaining real ephemeris data for Earth and Mars coupled with a Lambert Solver. If you know a little python I highly recommend this video series on YouTube to get an idea of how this can be done:

Not the answer you're looking for? Browse other questions tagged orbital-mechanics rockets propulsion mathematics hohmann-transfer or ask your own question.

25
Delta-V chart mathematics
10
To what extent could a single Triton flyby slow down a direct Hohmann transfer to Neptune for NOI?
6
Question about the Hohmann Transfer: why does delta-v go down when transferring to a higher orbit?
4
Deriving the changes in Keplerian Elements induced by small impulses
2
What orbits are Starlink satellites now deployed into? How low to do they go on their first perigee?
2
Calculating total burn time for a rocket under constant acceleration with two propellant consumption rates
20
Why can't you travel to Mars in a straight line?
2
How a continuous thrust orbit transfer can be compared with Hohmann transfer?
1
Formula for Determining Time to Perform Delta-V Burn Given Propulsion System Parameters