During the Apollo program, checkout tests of launch vehicle and spacecraft systems were gradually being automated, moving away from the manual processes during the early years of the space program to (almost) fully automated tests by the time of Apollo 11.

In the evolution of automatic checkout equipment, one of the most interesting problems centered on the creation of a new language. The language tapes incorporated in the computer programs had to be functional for the designer of the vehicle as well as the test engineer. Readouts on malfunctions had to make sense to persons reworking the piece of hardware that failed or had not performed properly. [...]

Test engineers were putting new demands on the computers, and these new demands as well as the style of language had to be communicated to the programmer. To arrive at an appropriate language, either the test engineer had to learn more about programming, or the programmer had to learn more about test engineering. The solution to this dilemma was ATOLL, an acronym for Acceptance Test or Launch Language, designed to bridge many of the gaps between the test engineer, the designer of the stage, and the computer programmer. Originating in late 1963, ATOLL eased confusion and helped to normalize the many functions of automatic test and checkout encountered at the manufacturer's plant, during static firing, and during operations at the launch site.

Given the important role ATOLL played in the success of the Saturns, I'm curious to know what it looked like, and how much "high level" it actually was. However, I'm unable to find any information on it. This is the Wikipedia article on ATOLL in its entirety:

Acceptance, Test Or Launch Language (ATOLL) was the programming language used for automating the checking and launch of Saturn rockets.

This report is not available on NTRS, and putting this reference into e.g. Google just yields and endless list of mirrors of Wikipedia (?).

I found one reference to ATOLL in Appendix 3 on GOAL of "Computers in Spaceflight: The NASA Experience":

GOAL is a high-level language that uses the terminology of test engineers to write tests and procedures to certify that a Shuttle vehicle is ready for launch. When the first automated preflight checkout programs were written in the mid-1960s, Marshall Space Flight Center originated ATOLL, a special high-level language for use in preparing test procedures. GOAL superseded that language in the early 1970s.

This appendix has a snippet of GOAL code and I'm guessing that GOAL resembles ATOLL, but that is no more than a hunch.

Question: what does ATOLL code look like? Are there listings or a reference manual available?

The documentation for the Ground Operations Aerospace Language is much more available - search at ntrs.nasa.gov and a variety of reports come up.

An ACM publication (which apparently is not a journal article, since Web Of Science does not find it - perhaps a conference proceedings not indexed - indeed, from DAC '73: Proceedings of the 10th Design Automation Workshop June 1973, pp 87–96) by Terry R. Mitchell in the Launch Vehicle Checkout Automation and Programming Office at KSC, is titled

It mainly discusses GOAL, but touches on ATOLL. This includes several figures with comparisons between GOAL and ATOLL to do the same thing. This is done in Figure 3, shown here: 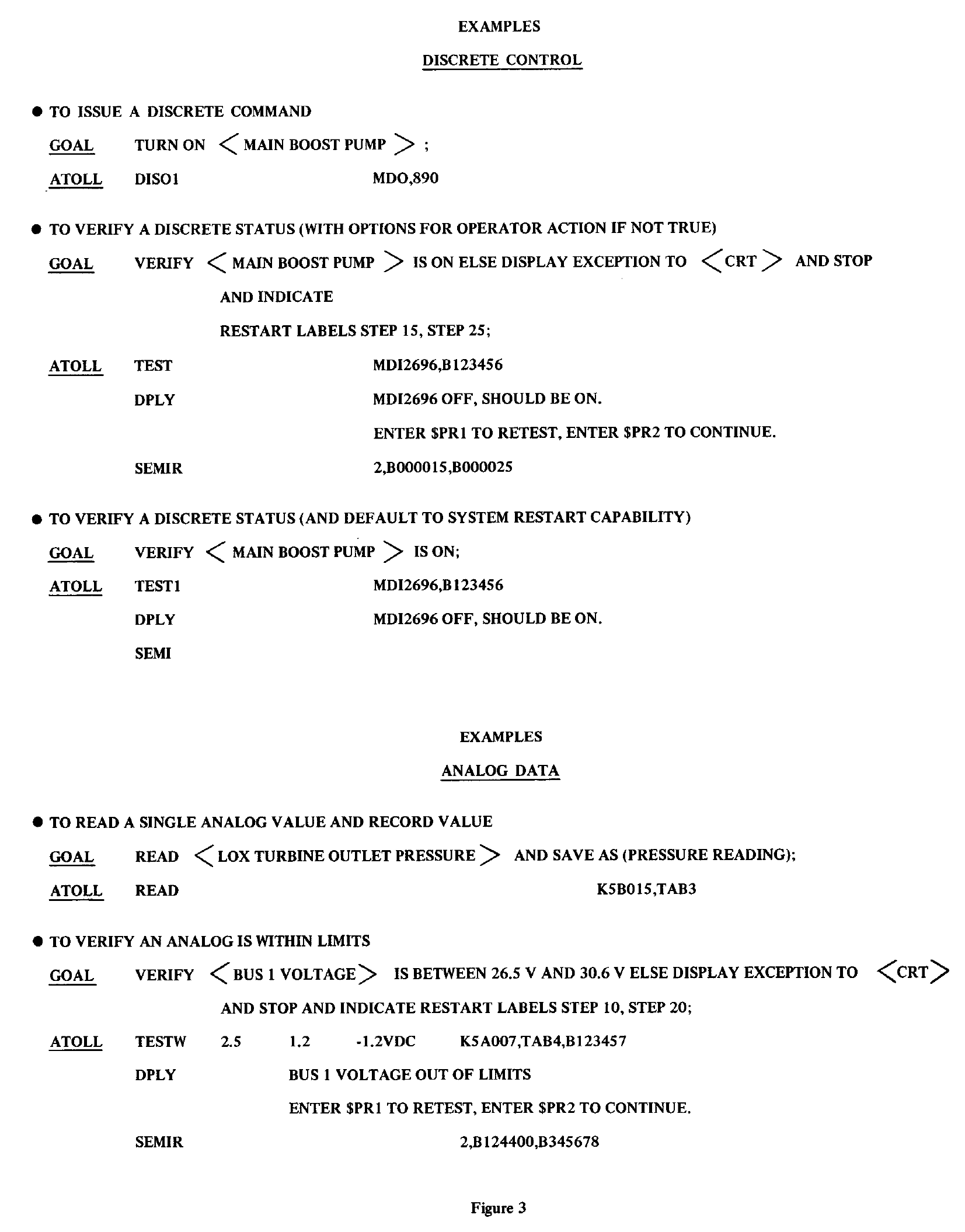 Further search has found an article in the April 1965 issue of Datamation (pages 33-35) which appears to lay out the language op codes completely, separated into Stimulation, Response, Control, and Utility commands. For example, Table 1 (Simulation Operators) looks like: 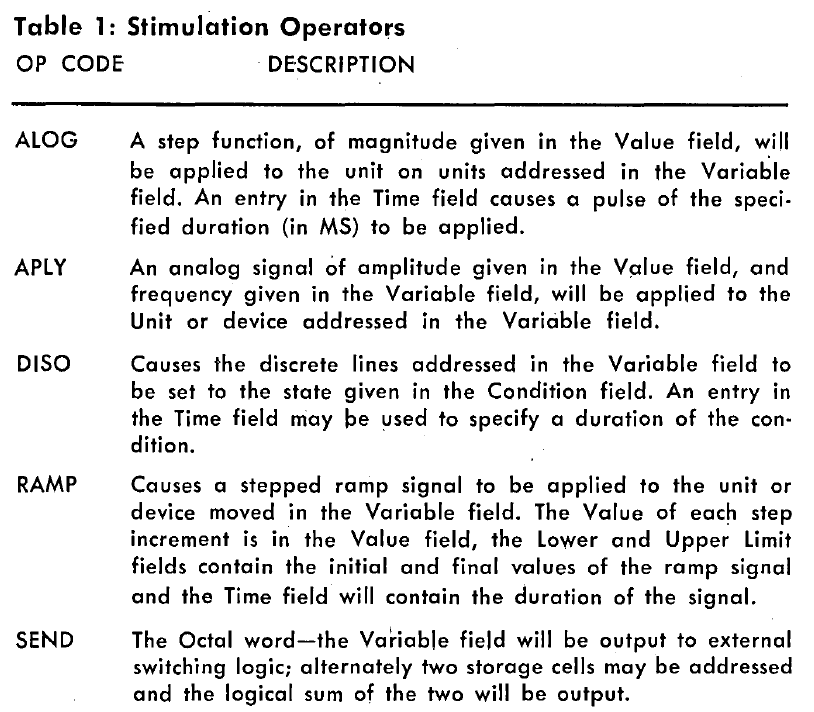 As an aside, the June 1965 issue (the 196506.pdf from the bitsavers archive) has a letter from B.L Ryle with some credits to various folks for the development of ATOLL.

Not the answer you're looking for? Browse other questions tagged apollo-program history saturn-v testing saturn-i or ask your own question.

33
Why didn't the Apollo 11 lander blow the dust away? (or why does it look like it didn't)
21
What was the first programming language in space?
5
Apollo Command Module's impact attenuation system, what did the inner part look like?
10
What did Karman's original "Karman line" calculations look like?
15
Why was the Saturn V considered to be human-rated after Apollo 6?
2
Saturn I's four outer engines' gas generator exhaust, why not vent to the side like the four inner engines?
4
What did the Apollo 12 multispectral Four-Camera system look like?
5
Is the acoustic horn at Stennis Space Center still there? Is it used?
12
What does it mean to tune the Saturn F-1 engine to a frequency, and how is the tuning done?