How can the proposed LUVOIR space telescope slew to different directions while keeping the sunshade in a fixed orientation? What compensates?

In this answer to Why does JWST have such a big Blind Spot? I mention that it moves as a rigid body; in order to change the direction the telescope is pointing the whole spacecraft slews, including the sunshade.

At 20:25 in the Launch Pad Astronomy video 4 Future Space Telescopes NASA wants to build linked below the narrator says of the proposed Large Ultraviolet Optical Infrared Surveyor telescope or LUVOIR:

Both architectures keep the sunshade facing the Sun while the telescope is free to point in any direction on the leeward side.

It shows a rock-solid sunshade connected to an articulating and likely heavy telescope.

Conservation laws dictate that there must be some other mass of some kind moving somewhere that's not shown in the video, or some more exotic way of exchanging angular momentum.

How do they do it?

How can the proposed LUVOIR space telescope slew to different directions while keeping the sunshade in a fixed orientation? What compensates?

Question: How can the proposed LUVOIR space telescope slew to different directions while keeping the sunshade in a fixed orientation? What compensates?

Question: How can the proposed LUVOIR space telescope slew to different directions while keeping the sunshade in a fixed orientation? What compensates?

I mention that it moves as a rigid body; in order to change the direction the telescope is pointing the whole spacecraft slews, including the sunshade.

In layman terms i think you are asking what is the big difference between JWST and LUVOIR, in terms of how each slews to observe its target.

As you say, JWST moves as a rigid body, ie. as one. LUVOIR does not.

LUVOIR is composed of two elements - the spacecraft and the payload:

payload is the telescope and the part that needs to be vibration free and it is this that slews around.

spacecraft is the support structure that houses avionics, fuel, sun shield, and the 4 CMG's, and everything else that generates vibration as well as providing attitude control of the entire system. The payload element determines the spacecrafts attitude.

The key element of this concept is VIPPS, which allows it to have a disturbance free payload (telescope):

The highest possible degree of isolation of a sensitive payload structure from spacecraft disturbances is realized through no physical contact between the two bodies.

Lockheed Martin Space Disturbance Free Payload technology, in development since 1999, has resulted in the basis for the non-contact Vibration Isolation and Precision Pointing System (VIPPS) for LUVOIR.

Technology readiness level 6, demonstrating this technology, is proposed for a CubeSat launched sometime before 2025. 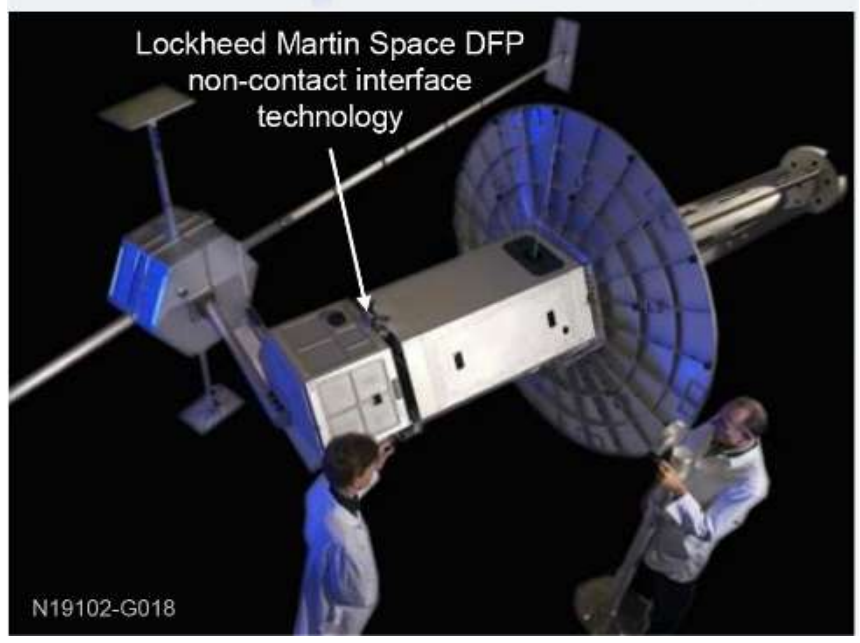 To control its attitude, the telescope pushes against the supporting spacecraft using a set of six noncontact linear-motion, electro-mechanical Lorentz force actuators.

Attitude of the telescope is determined using a Fine Guidance Sensor or other LOS sensor on the payload, and the error signal garnered from six non-contact position sensors is used to drive reaction wheels and thrusters on the supporting spacecraft.

The spacecraft controls its inertial attitude such that interface stroke and gap are maintained. Since the telescope is physically separated, the disturbances and structural excitation of the spacecraft and sunshield do not propagate to the telescope. 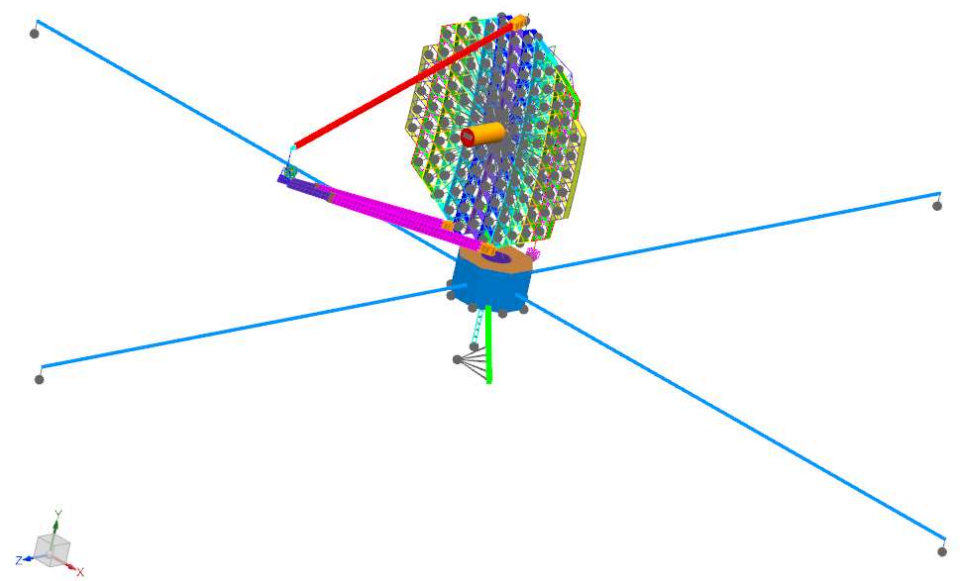 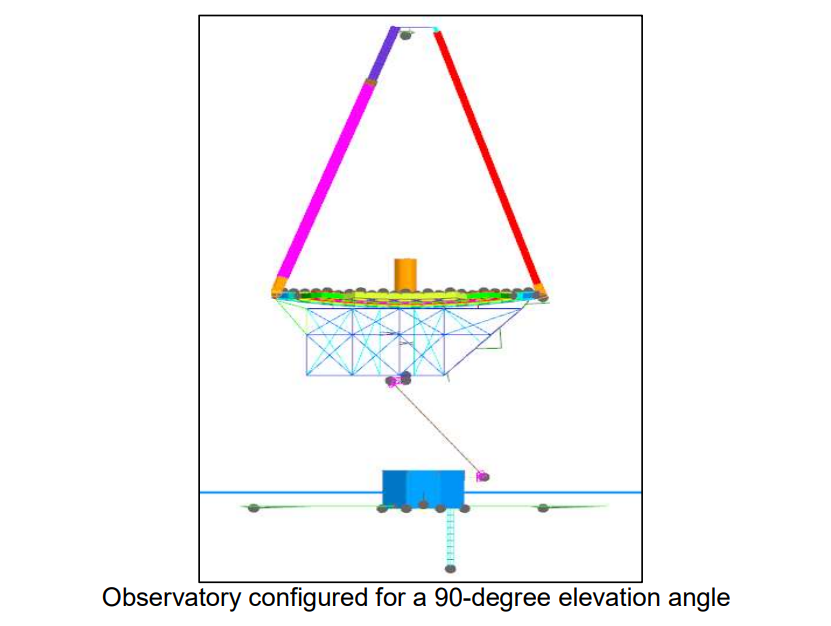 In these examples, the lateral position of the telescope center-of-gravity remains constant. This constraint requires both ends of the boom be articulated as illustrated above. The vertical distance between the observatory and spacecraft centers-of-gravity do change because the VIIPS boom is of fixed length.

For large-angle slewing, the 4 CMGs located on the supporting spacecraft body are used.

The mechanical interface between the telescope and the supporting spacecraft houses 6 vcm and associated sensors located between the gimbal and backplane support frame.

The payload section itself has vcms and associated sensors for the telescope itself. 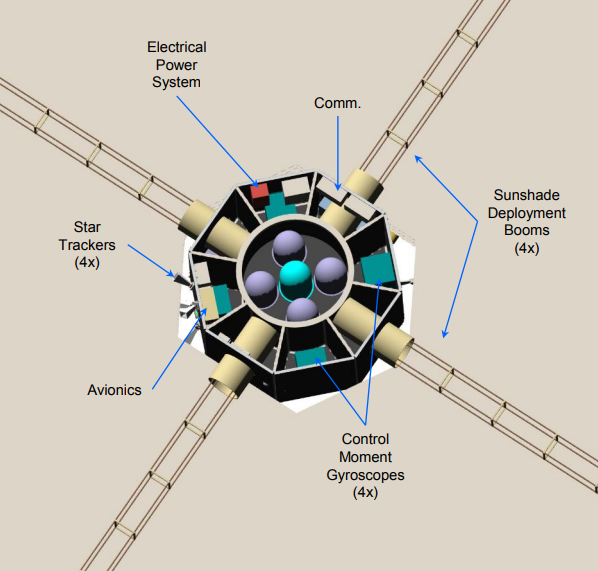 The gimbal and boom can be seen on the back here: 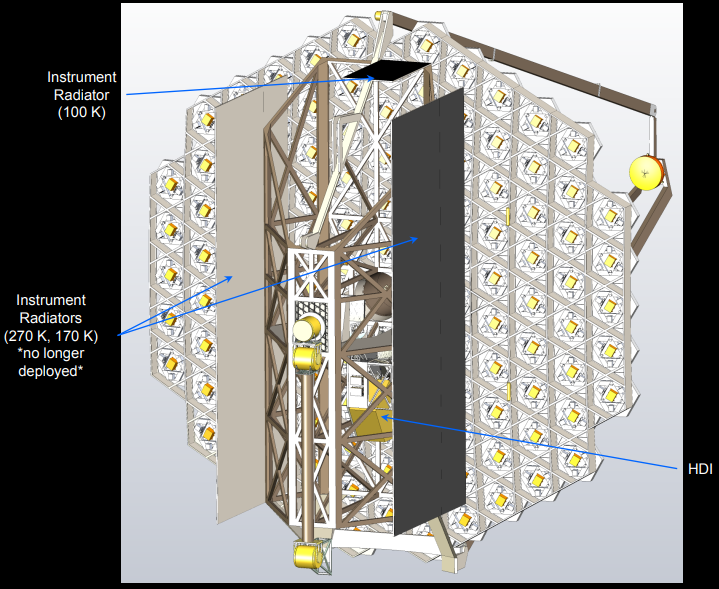 Both LUVOIR-A and LUVOIR-B designs are intended to be supported at the end of an articulated arm as shown schematically in the figures below. 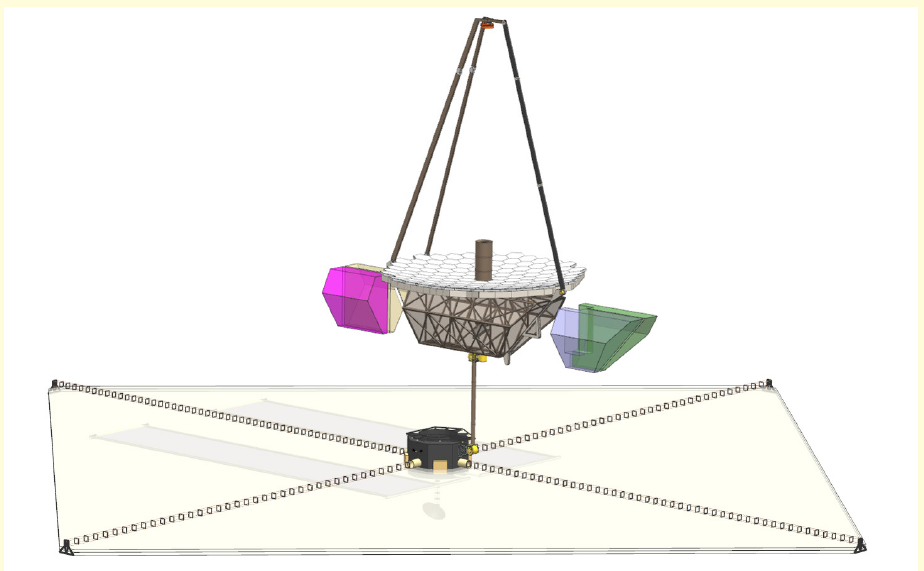 By locating the upper pivot point close to the center of mass of the telescope reduces momentum issues. Details on the PAS (Payload Articulation System) can be found starting on page 8-50 of the LUVOIR Final Report (1).

Not the answer you're looking for? Browse other questions tagged design attitude attitude-determination-and-control space-telescope or ask your own question.

37
Can James Webb take pictures of our solar system? In what ways will they differ from/compliment those from Hubble?
8
Question: By design, JWST cannot observe in the anti-sun direction. Is this due to Gegenschein backscatter?
5
Are they already planning a successor to the JWST?
4
Why does JWST have such a big Blind Spot?
2
With independent control of attitude and thrust direction, could JWST be kept pointing in a “safe” direction during "towing"?

13
What kind of thrusters will the James Webb Space Telescope use for station keeping?
2
For a given 48 hour observing period, what fraction of the celestial sphere is available to CHEOPS?