What constellation is on the NASA logo?

While watching the ORB3 Antares explosion press conference, I began to wonder about the design of the NASA logo.

Do the white stars on the blue background represent some particular stellar pattern, or is it an abstract design?

Also, what does the red elongated chevron represent? 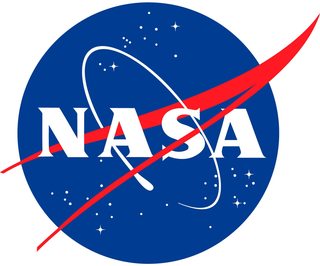 According to Symbols of NASA:

From the wing of the space shuttle to the top of the NASA homepage, the agency's official insignia is probably its best-known symbol.

The round red, white and blue insignia, nicknamed the "meatball," was designed by employee James Modarelli in 1959, NASA's second year. The design incorporates references to different aspects of the mission of the National Aeronautics and Space Administration. The round shape of the insignia represents a planet. The stars represent space. The red v-shaped vector represents aeronautics. The circular orbit around the agency's name represents space travel.

And Wikipedia on NASA insignia adds that the red chevron is in the alternate shape of the constellation Andromeda.

Otherwise, there is no exactly such constellations or a groups of stars in the night's sky that would follow the triangle that the three groups on the logo represent. They all appear to be constellations that would appear on the Northern hemisphere night skies at least during some parts of the year (Orion for example isn't always visible or is too low on horizon at times), but they certainly don't represent the Summer Triangle between Deneb in Cygnus, Vega in Lyra and Altair in Aquila. I'm fairly certain about the Orion and Cygnus, alas, I fail to clearly recognize the group of stars on the bottom right of the logo.

This article from the NASA History Program Office discusses the history of the NASA "meatball" logo. While not addressing a specific constellation, the red chevron represents aeronautics via an airfoil that was "the latest design in hypersonic wings at the time the logo was developed."

The last portion of the article has a very interesting discussion on the difficulties in printing the logo in black/white and color scanning it.

the one on top is Orion. the lower left, looks like andromeda. the lower right i'd say draco.

Wich conspiracy theoricians would say are the constelations of the aliens we are allied with.

The vector means speed, and the round thingy is an infinite cycle, wich when you assemble the 2 ideas is space travel at faster than light speed.

Orion on the top. Cygnus on the bottom left. Bottom right cannot be determined without a supercomputer.

Looking up into the sky from a planet not our own is what makes this alleged "artistic license" appear as such. The "meatball" logo is perhaps the largest pink elephant in the room of which there has been no real research to pinpoint exactly where in our cosmic backyard these stars appear as such.

10
Why has NASA shunned the worm logo?
2
What is the meaning of the ROSCOSMOS logo?

9
What is the success rate of NASA launches?
7
What role does the NASA deputy administrator play?
10
Is this really the logo of the North Korean space program?
1
What are the uses of the NASA core Flight System (cFS)?
10
Why has NASA shunned the worm logo?
2
What is the meaning of the ROSCOSMOS logo?
37
Is the NASA worm logo back?