At various moments in the NASA video NASA’s SpaceX Crew-3 Astronauts Launch to the Space Station astronauts are shown standing or walking or otherwise posing for the camera in their Dragon capsule suits without any connection to a water cooler/recirculator that would normally pump coolant through a system of tubes in thermal contact with the astronauts body to remove the one to several hundred watts of heat the human body produces under various levels of exercise.

Even in the early days of spaceflight astronauts carried portable cooler/recirculator units. Here are some more recent examples:

So I assume that in the screenshots below the astronauts were only momentarily disconnected from their units, which they probably anxiously eyed the whole time as they would have started getting toasty almost immediately.

I'm not asking for an LD50 answer (i.e. how long before half of them would die) but more of a rules and/or comfort answer. Like everything else there are likely stated limits on how long they are allowed remain disconnected, and limits on the amount of physical exercise they can do while being disconnected.

There may also be at least a lower limit that can be gleaned from video; if they're shown disconnected continuously for 90 seconds for example then an acceptable answer might be "apparently at least 90 seconds."

These "hotshots" must have been getting pretty hot, literally! 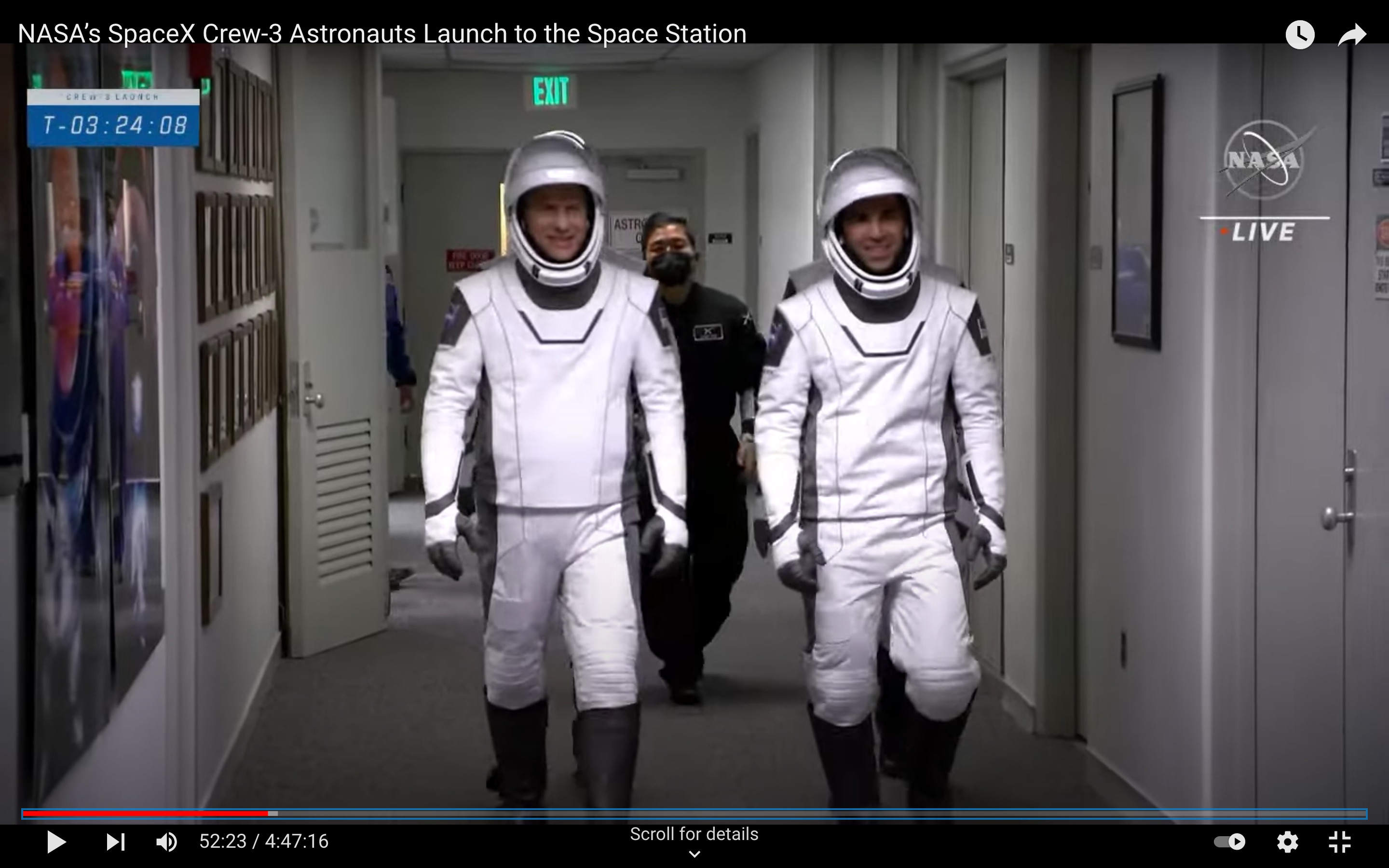 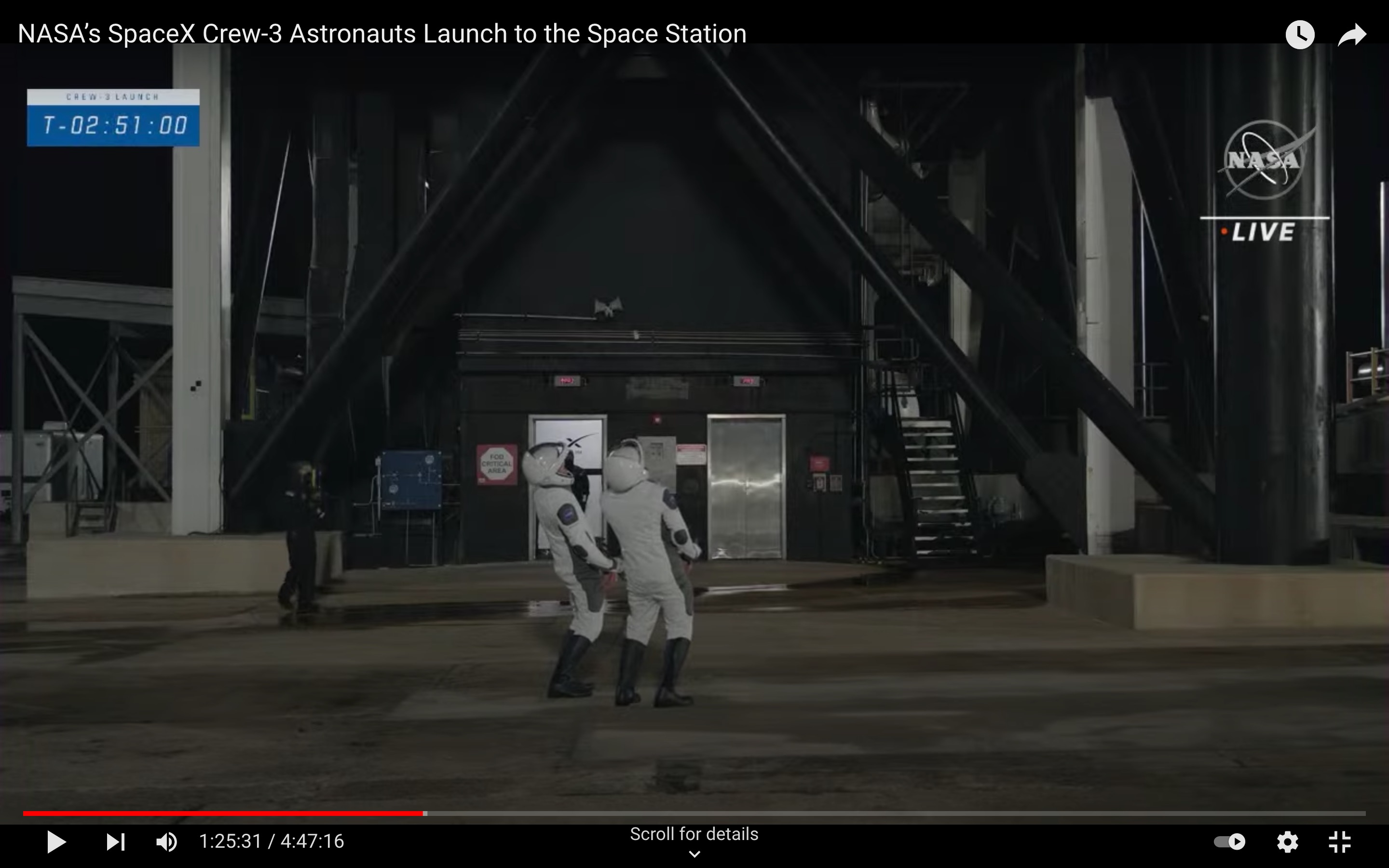 There may also be at least a lower limit that can be gleaned from video; if they're shown disconnected continuously for 90 seconds for example then an acceptable answer might be "apparently at least 90 seconds."

"Apparently at least 1009 seconds, as seen during the Inspiration4 mission".

In the Crew-3 video, NASA unfortunately did not show the astronauts leaving the Teslas nor do we get video from inside the capsule as the umbilicals are connected (we do get video of Matthias Maurer taking his seat, but unfortunately, his right leg with the umbilical port is obscured from the camera), so we don't have an exact number:

This gives us a number of "at least 813 seconds with a pretty wide margin of error". During ingress, we can hear a callout that they are 2 minutes ahead of schedule, so it stands to reason that the suits are rated for at least another couple of minutes without umbilical support.

For Inspiration4, SpaceX and the crew gave a lot more media access than NASA does, so we have a very precise timeline:

It looks like during a nominal mission, the crew will be without umbilicals for close to 20 minutes. However, in a worst case scenario, they still must be able at this point to walk to the escape slides, slide down to the ground, and walk to the bunker before they have a chance to doff their suits.

So about 20 minutes within a suit without cooling seems possible.

Not the answer you're looking for? Browse other questions tagged crewed-spaceflight spacesuits dragon-v2 thermal-control cooling or ask your own question.

9
Will suits worn on Mars lose kilograms of "expendable water" each time they are used?
2
What is the blue box that the Exp. 53 Astronuats/Cosmonauts carried with them?
1
What are these Soyuz Astronauts/Cosmonauts holding in their hands before launch?

11
How have space suits dissipated the heat removed from astronauts?
6
How can space suits hold a pressure when they're hand sewed?
3
What would be the longest hypothetical emergency which would confine the Apollo astronauts to their suits?
24
How do EVA suits manage water excretion?
16
How long can Crew Dragon stay at ISS?
18
How would astronauts brave a 19 hour trip to ISS inside Crew Dragon capsule?
3
Could the Crew Dragon be used to re-boost the ISS?
15
Are there any superstitions practiced in space?