The average travel time to Mars has been quoted to be around nine months (~ 270 days). This assumes current propulsion methods and when Mars and Earth are near each other.

Musk has been quoted to say that his ITS space rocket system could make it to Mars in about 80 days - or less than a third of the time current techniques could get us there.

I'm curious to learn more about this statement. What is unique about the ITS that would make the travel time so much shorter? Is the propulsion method described in existence today?

I've reviewed a few other questions on stack but have come up empty so far:

mars spacex-starship interplanetary travel its
Share
Improve this question
edited May 2 at 17:00

What is unique about the ITS that would make the travel time so much shorter? Is the propulsion method described in existence today?

The current manifestation of the ITS is Starship, and the performance estimates of such a vehicle have shrunk considerably since the public reveal of the ITS (it is very much so a different vehicle though so not an apples to apples comparison). The propulsion system on all manifestations of ITS/BFR/Starship is not exactly revolutionary. It uses chemical rocket engines the same way that the Apollo missions did 50+ years ago (albeit with different propellants and significantly better cost & mass efficiency). The in-space long term storage, transfer, and eventual use of cryogenic propellants is a key enabler of SpaceX's visions for Starship, and this is not a well explored technology (though in-space transfer of room-temp fluids is routine).

The uniqueness of a fully fueled Starship (when in orbit) lies in its maneuvering capabilities ($\Delta V$). Using the rocket equation and current Starship specs: 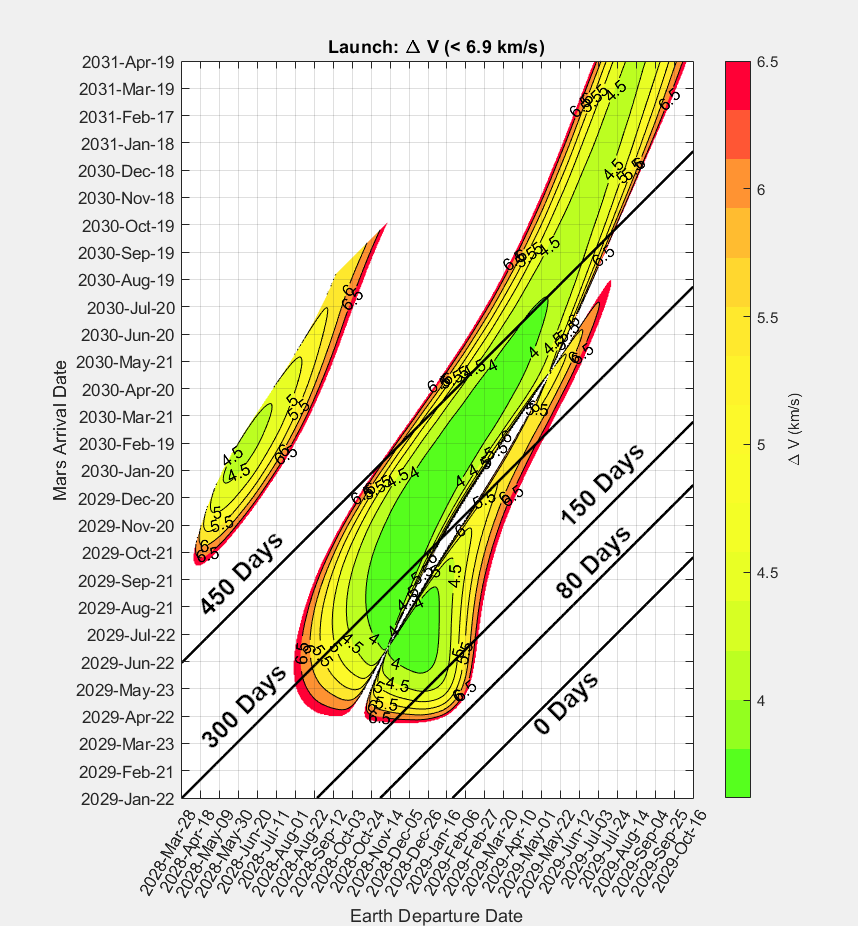 Which shows that 80 days is not quite possible. The impressive $\Delta V$ of Starship does wonders to expand the width of a transfer window, but the tyranny of the rocket equation dictates that it cannot significantly shorten the transfer period.

FWIW, here is the relationship of $\Delta V$ to $C3$ for this example (250 km parking orbit assumed). The region in grey is the typical C3 range for spacecraft sent to Mars: 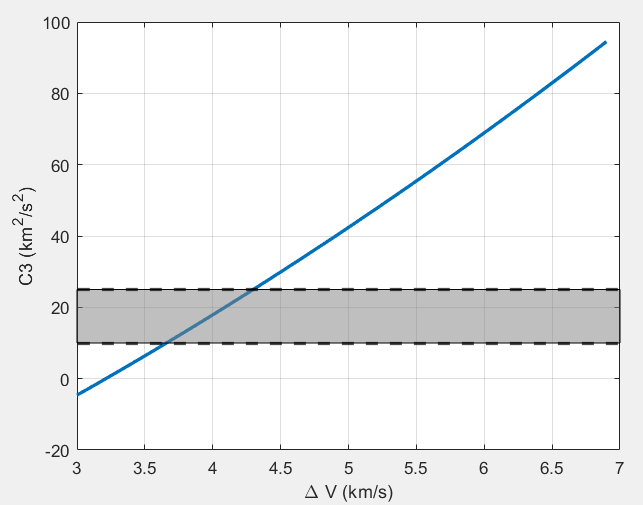 Probably the key term here is pork chop plot. The linked page includes one from 2005 for Mars where the lowest C3 departure was 15.5 and 400 or so days, but doubling that to 30 got a transfer in 125 days, by leaving Earth faster and burning off more energy on arrival.

For science payloads it generally makes sense to use the minimum fuel load and pack as much equipment as possible and wait the extra days.

For humans they need to eat and breath, so there is math to be done removing consumables and adding fuel. In the 2005 porkchop plot going from 15.5 C3 to 16 gets access to a new minimum on the lower part of the plot, dropping from 400 to 200 days, and pushing to 16.5 gets to 175 days. So for Humans the physically optimal transfer is probably never going to be the best choice, it just becomes a question of trade offs.

With SpaceX, having made Starship the all in one solution for Mars they have a heat shield that is (hopefully) robust enough to re-enter at Earth, and has enough performance to reach Earth orbit in it's own right (many Mars designs assume ion engines). So they have a design that is consumable/space constrained but has surplus performance for departure and capable of aerobrake/aerocapture at Mars, which makes high energy routing more possible than for a larger but lower thrust/less robust vehicle.

Possibly most critical Starship uses cryogenic Methane and Oxygen so every day in space loses some to evaporation. So Starship has further choices to burn fuel on departure for faster transit or have to carry more spare fuel to make up for more evaporation.

It is possible that the 90 day transit is being forced on them by evaporation rather than a true feature of the design. At the moment (January 2022 before first sub orbital Starship flight) not enough information is available for outsiders to apply useful math to the question.

Not the answer you're looking for? Browse other questions tagged mars spacex-starship interplanetary travel its or ask your own question.

32
Has in-space refueling been done?
12
Which star could Starship reach soonest?
11
Has on-orbit refueling ever been demonstrated with cryogenic fuels?
12
Could SpaceX's Starship's landing and restart process work on Titan?
6
With and without refilling at LEO, how much more than the landers weight of the Venera 9 mission could a Starship deliver near a pole of Venus?
6
Starship surface heating on Mars landing
2
What are the travel times associated with different low-thrust accelerations going to Mars?
0
Travel To Mars - Fast

31
Why not travel to Mars in 2 months?
3
How plans for Mars colonization comply with Planetary protection act?
8
Is it probable the Red Dragon will successfully land on Mars on the first try?
7
SpaceX ITS - going beyond Mars
1
How far did the Mars Polar Lander travel?
27
How can Elon Musk's Tesla actually reach Mars orbit?
10
Methane on Mars - Can we locate the source?
4
What are these things in Elon Musk's tweeted Starship video?
11
Is there independent evidence that China landed a robot on Mars in May 2021?
2
How do we get to Mars in a week (7 days)?